Hispanics and Asian Americans are more likely than the general U.S. public to vote for the Democratic Party, to express greater approval of President Obama, and to express greater satisfaction with the general direction of the country. The two surveys also find that Hispanics and Asian Americans—the two groups at the center of the modern U.S. immigration wave—have more in common with one another on these political and personal measures than they do with the rest of the American public.

Assessing the Parties and the President 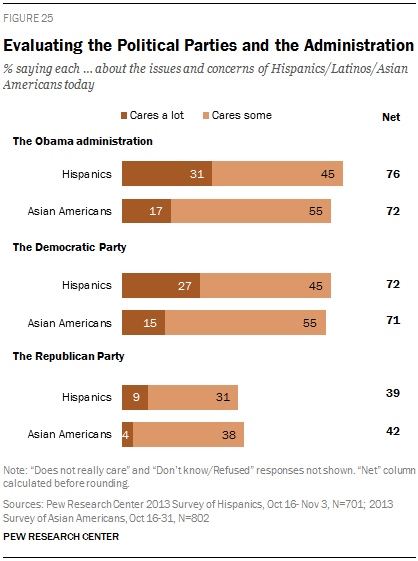 The gaps between Hispanics and Asian Americans and the general U.S. public are especially striking on the political front. For example, a year after Hispanics and Asian Americans voted for Democrat Barack Obama over Republican Mitt Romney by lopsided margins (71%-27% and 73%-26%, respectively, compared with 51%-47% among all voters), the new Pew Research survey finds that both groups continue to see the Democratic Party as much more attuned than the Republicans to their issues and concerns.5 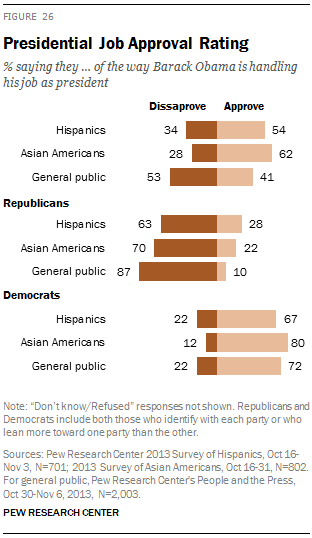 Even though the Obama administration has come under criticism from some for increasing the number of deportations of unauthorized immigrants and failing to deliver a comprehensive immigration bill, about three-quarters of Hispanics (76%) and Asian Americans (72%) say that the administration cares a lot or some about the concerns of their communities. However, just as with their views of the Democratic Party, Hispanics are about twice as likely as Asian Americans to say the Obama administration cares a lot about the issues and concerns of their groups—31% vs. 17%.

As for Obama’s job performance, some 62% of Asian Americans and 54% of Hispanics approve of the way he is handling his job as president. By comparison, just 41% of the American public approves of the job the president is doing (Pew Research Center for the People & the Press, 2013c). There are no differences between the native born and the foreign born within those two communities, but there are predictable partisan differences, with the Republican or Republican-leaning members of the groups much less inclined than the Democratic or Democratic-leaning members to approve of the president’s job performance.

Assessing Self and Country 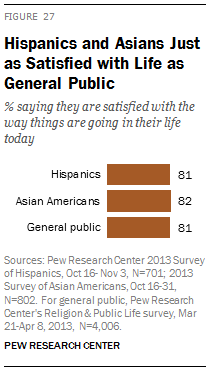 Some eight-in-ten Hispanics (81%) and Asian Americans (82%) say they are satisfied with the way things are going in their life today, similar to the 81% of all American adults who feel the same way. There are no differences on this question by nativity. 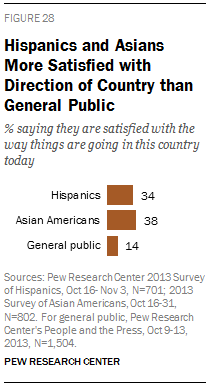 On this measure, once again, there are substantial differences in the evaluations of Hispanics and Asian Americans and those of the general public. Just 14% of the general public is satisfied with the way things are going in the country today, according to a separate Pew Research Center survey conducted in October (Pew Research Center for the People & the Press, 2013b). 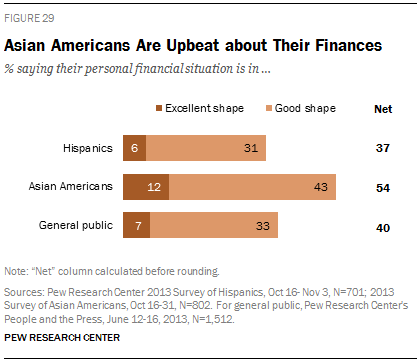 On self-assessments of personal finances, about half of Asian Americans (54%) describe their personal financial situation as “excellent” or “good,” while only about a third of Hispanics (37%) say the same. Hispanics closely resemble the general U.S. public on this question—some 40% of members of the general public say their finances are excellent or good (Pew Research Center for the People & the Press, 2013a). 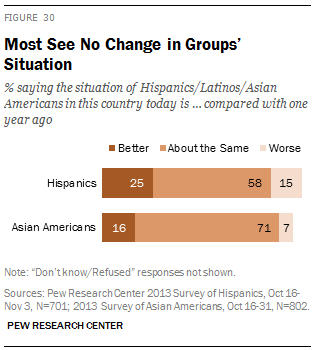 The surveys asked Hispanic and Asian-American respondents whether they believed the situation of their group in the U.S. has gotten better, worse or stayed the same in the past year. Majorities of both groups say it has stayed the same, but this view is more prevalent among Asian Americans than Hispanics—71% vs. 58%.

The share of Latinos who say things have gotten better for their group in the past year is the highest recorded by a Pew Research survey since 2007, before the Great Recession. Then, 26% of Latino adults said the same (Pew Hispanic Center, 2007). In surveys taken in 2008 and again in 2011, more Latinos said things were getting worse than said things were getting better.6

Next: References
← Prev Page
Page1Page2Page3Page4You are reading page5Page6Page7Page8
Next Page →