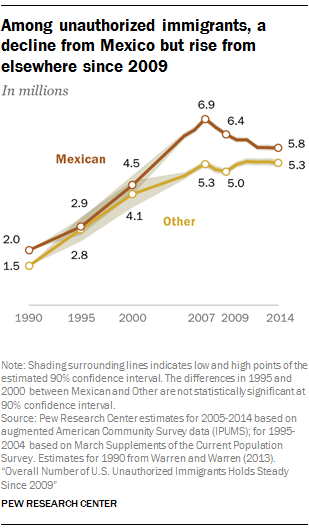 The U.S. unauthorized immigrant population – 11.1 million in 2014 – has stabilized since the end of the Great Recession, as the number from Mexico declined but the total from other regions of the world increased, according to new Pew Research Center estimates based on government data. 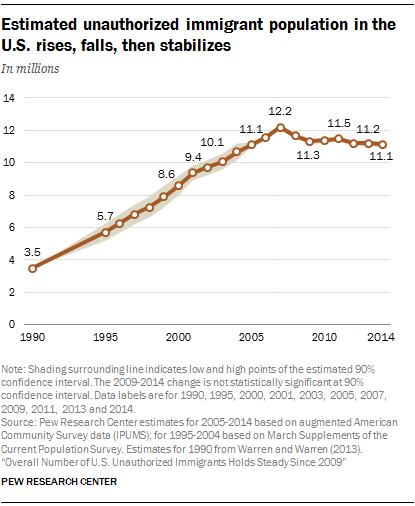 These are some of the key findings from the latest Pew Research Center estimates based mainly on U.S. Census Bureau data. Details concerning the source data and methods for calculating the estimates are available in the methodology.

As the U.S. unauthorized immigrant population has stabilized, it also has become more settled. In 2014, unauthorized immigrant adults had lived in the U.S. for a median of 13.6 years – meaning that half had been in the country at least that long. In 2005, the median had been eight years, before rising to 10 years in 2009, the year the recession ended.

As overall net immigration from Mexico declined, immigration from Asia did not flag – indeed, it increased somewhat. As a result, among all newly arriving immigrants to the U.S., more now come from Asia than from Latin America, a change since 2008. 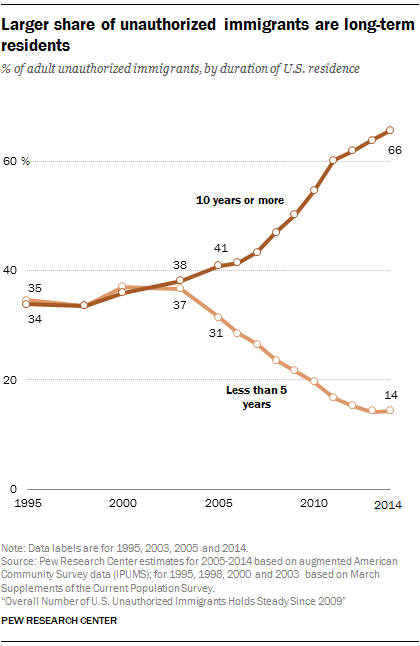 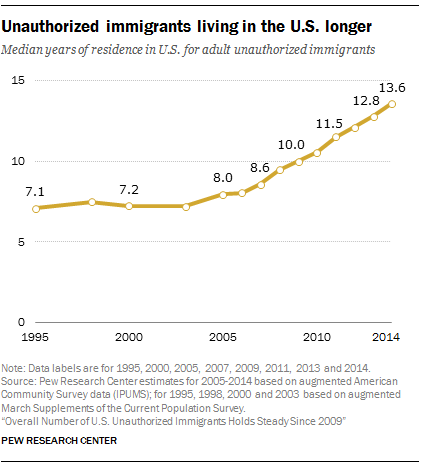 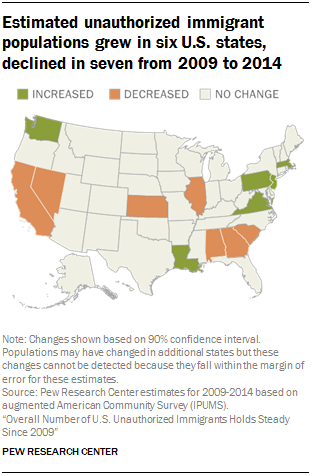 The estimated population of unauthorized immigrants went down in seven states from 2009 to 2014 because of declines in the number from Mexico. In six of those states – California, Georgia, Illinois, Kansas, Nevada and South Carolina – the estimated number of unauthorized immigrants from countries other than Mexico did not change. In the remaining state – Alabama – the total from other countries rose from 2009 to 2014, but the number from Mexico decreased more. 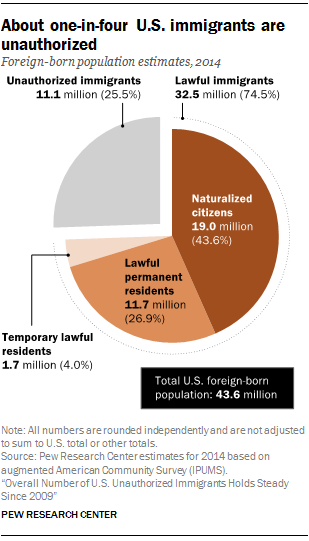 Unauthorized immigrants accounted for 3.5% of the overall population and 26% of the nation’s 43.6 million foreign-born residents in 2014. The U.S. foreign-born population also included 19 million naturalized citizens, 11.7 million lawful permanent residents and 1.7 million lawful residents with temporary status (such as students, diplomats and so-called “guest workers” in the technology sector). In total, immigrants represented 13.6% of the U.S. population in 2014.

The issue of unauthorized immigration has played a prominent role in the 2016 presidential campaign. For more on the nation’s view of immigrants and immigration policy, see Pew Research Center surveys on this topic.

The unauthorized immigrant estimates in this report are produced using a multistage method that first subtracts the estimated U.S. lawful foreign-born population from the total adjusted foreign-born population to derive a residual estimate of the unauthorized immigrant population. Then, the residual estimates serve as control totals in assigning legal status to individual respondents in the survey. The main source of data for 1995-2004 is the March supplement of the Current Population Survey, and for 2005-2014 it is the American Community Survey; both are conducted by the U.S. Census Bureau; see Methodology for more details.

Because they are based on updated data, the new estimates of unauthorized immigrants for states and the nation in this report supersede (and in some cases revise) previously published Pew Research Center estimates. The most notable of these revisions is that previous estimates showed a decrease in the unauthorized immigrant population in Massachusetts from 2009 to 2012; the updated numbers show no significant change for those years and a subsequent increase by 2014. All trends have been updated to reflect current data. See Methodology for more details.

Because they are based on updated data, the new estimates of unauthorized immigrants for states and the nation in this report supersede (and in some cases revise) previously published Pew Research Center estimates. The most notable of these revisions is that previous estimates showed a decrease in the unauthorized immigrant population in Massachusetts from 2009 to 2012; the updated numbers show no significant change for those years and a subsequent increase by 2014. All trends have been updated to reflect current data. See Methodology for more details.

Some unauthorized immigrants are protected from deportation

Unauthorized immigrants include those who enter the country without legal permission and those who overstay their visas. About 10% of unauthorized immigrants have been granted temporary protection from deportation under two government programs. They include more than 728,000 young adults who were brought to the U.S. as children and successfully applied for President Barack Obama’s 2012 Deferred Action for Childhood Arrivals program. (An additional 4 million young adults and their parents would have been eligible under an expansion that has been blocked by a federal court.) An estimated 326,000 immigrants, mostly from Central America, have been granted Temporary Protected Status because of disease, natural disaster or conflict in their home countries. The Pew Research Center estimates of the unauthorized immigrant population also include some people who have applied for asylum status but whose applications have not been processed. As of April 2014, about 45,000 cases of principal applicants were pending; if family members are included, that total might rise to as much as 75,000.

“Unauthorized immigrants” are all foreign-born non‑citizens residing in the country who are not “lawful immigrants.” These definitions reflect standard and customary usage by the U.S. Department of Homeland Security and academic researchers. The vast majority of unauthorized immigrants entered the country without valid documents or arrived with valid visas but stayed past their visa expiration date or otherwise violated the terms of their admission. Some who entered as unauthorized immigrants or violated terms of admission have obtained work authorization by applying for adjustment to lawful permanent status, obtaining Temporary Protected Status (TPS) or receiving Deferred Action for Childhood Arrivals (DACA) status. This “quasi-lawful” group could account for as much as about 10% of the unauthorized population. Many could also revert to unauthorized status.

Next: 1. Birth regions and nations
← Prev Page
You are reading page1Page2Page3Page4Page5Page6Page7Page8
Next Page →