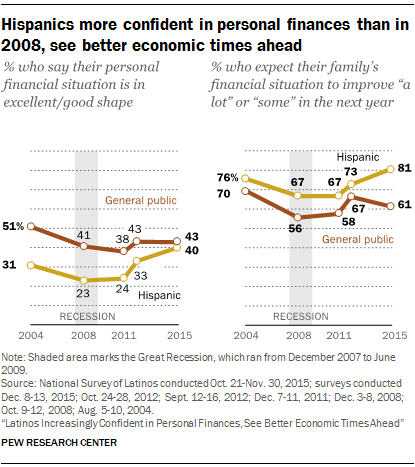 Latinos have become considerably more upbeat about their personal finances and optimistic about their financial future since the Great Recession, according to newly released results from a national survey of Latino adults. The survey also shows that Latinos have pulled even with the general U.S. population in their views of their personal finances and continue to outpace them on optimism about the future. However, community economic indicators show limited progress since the Great Recession.

Four-in-ten Latinos say their personal finances are in “excellent” or “good” shape, a 17 percentage point increase since 2008, when only 23% made a similarly positive assessment of their finances (the Great Recession began in December 2007). 1 By contrast, the share of all Americans who have a similarly positive view of their finances remained essentially flat during the same seven-year period (41% in 2008 vs. 43% in 2015).

Latino adults also see upward mobility in their children’s futures. Fully 72% say they expect their children will be better off financially than they themselves are now. 2

These findings emerge from the 2015 National Survey of Latinos, a nationally representative bilingual telephone survey of 1,500 adults conducted on both landline and cellular telephones. It was fielded from Oct. 21 to Nov. 30, 2015, and has a margin of error of plus or minus 3.3 percentage points at the 95% confidence level.

The nation’s Latino population is its largest minority group, numbering 55.3 million in 2014. They are also one of its fastest-growing groups – the U.S. Latino population grew 57% between 2000 and 2014. With this fast demographic growth has come a growing impact on the nation’s economy. Between 2009 and 2013, Latinos accounted for 43.4% of total jobs growth, with U.S.-born Latinos driving most of that job growth. And the group’s purchasing power is on the rise. According to the University of Georgia’s Selig Center for Economic Growth, the purchasing power of the U.S. Latino community was $1.3 trillion in 2014, a gain of 155% since 2000 and higher than that of blacks ($1.1 trillion) and Asians ($770 billion). 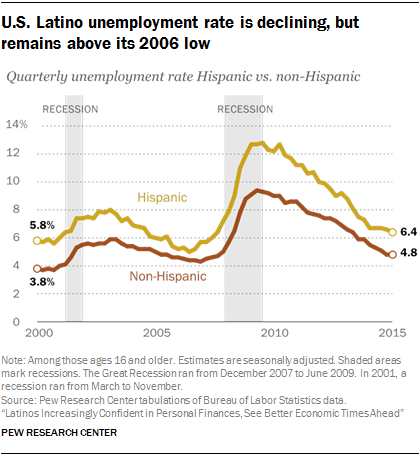 At the same time, median household income for Hispanics has stagnated since the Great Recession—in 2014 it was $42,491, a level essentially unchanged since the Great Recession (income is also little changed among the U.S. public), according to the latest Census Bureau data. In addition, the same Census Bureau report shows that the Hispanic poverty rate – 23.6% in 2014 – is less than a peak of 26.5% in 2010 but remains above pre-recession levels (as it does for all Americans). On wealth, Hispanic households had the largest percentage decline in their net worth through 2009 of any major racial or ethnic group. Unlike white households, however, their net worth continued to fall after the recession. 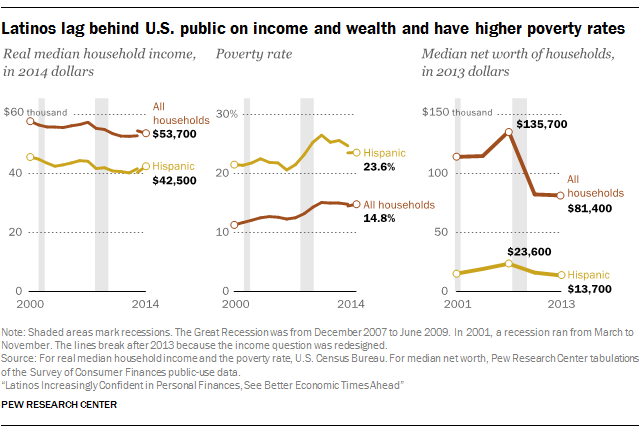 Economic issues have long been among the top issues identified by Hispanics when asked about those that are more important to them personally. For example, in 2014, the issues of education and the economy and jobs were rated more important than health care and immigration among registered voters. And on such issues as the minimum wage, Hispanics are more likely than the general U.S. public to support an increase – 84% versus 73%, according to the Pew Research Center’s December 2015 survey.

The terms “whites,” “blacks” and “Asians” are used to refer to single-race, non-Hispanic components of their populations.

“U.S. born” refers to persons who say they were born in the United States, Puerto Rico or other U.S. territories.

“Foreign born” refers to persons who say they were born outside of the United States, Puerto Rico or other U.S. territories. The terms “foreign born” and “immigrant” are used interchangeably.

Next: 1. Latinos are increasingly positive about current finances, but many say family income is not keeping pace with cost of living
← Prev Page
You are reading page1Page2Page3Page4Page5Page6
Next Page →

Latinos Increasingly Confident in Personal Finances, See Better Economic Times Ahead
1. Latinos are increasingly positive about current finances, but many say family income is not keeping pace with cost of living 2. Latinos are optimistic about their finances in the next year and upward economic mobility for their children Acknowledgments Methodology Appendix A: References