Nearly three-in-four (72%) Latinos say they own a desktop or laptop computer, according to the Pew Hispanic Center survey. Compared with the general public, computer ownership among Latinos is lower—79% versus 72%.

Overall, whites have the highest desktop/laptop ownership rate—83%. By comparison, 70% of blacks say they own a desktop or laptop computer (Pew Research Center for the People & the Press, 2012b).

Among Latinos, Who Owns a Computer?

The lowest ownership rates among Hispanics are among those ages 65 and older (35%), those with no high school diploma (51%) and those who are Spanish dominant (59%).

The Pew Hispanic survey reveals a few other notable patterns of ownership among Latinos. The native born are more likely than the foreign born to say they have a desktop or laptop computer—83% versus 64%. Similarly, English-dominant Latinos and bilingual Latinos are more likely than Spanish-dominant Latinos to say they own a computer—82% and 78% versus 59% respectively. 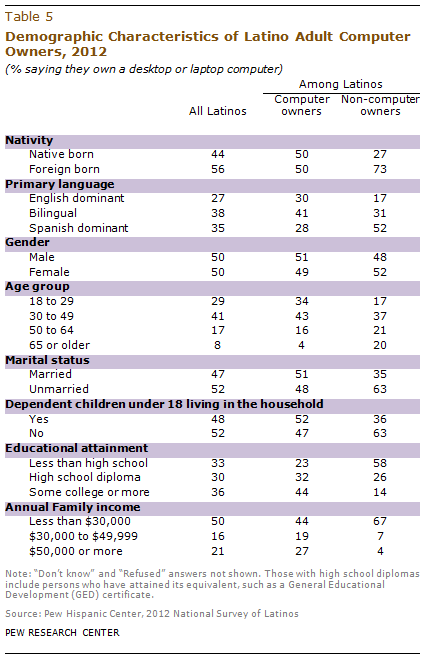 Latino computer owners are three times as likely as Latinos who do not own a computer to have some college education or more—44% versus 14% respectively.