However, most potential Latino voters do not live in battleground states. More than half (55%) live in just three states—California, Texas and New York. When other non-battleground states with large Latino populations are included—Arizona, Illinois, New Jersey and New Mexico—two-thirds (68%) of the Latino electorate is accounted for.

Nonetheless the presence of Hispanics in this year’s battleground states has grown since 2008. The battleground states of Florida, Colorado and Nevada each have large Hispanic populations that have grown in size and share since 2008. In Florida, for example, the number of Hispanics eligible to vote grew by 244,000 between 2008 and 2010. Their share also increased, rising to 15.9% from 14.5% in 2008. 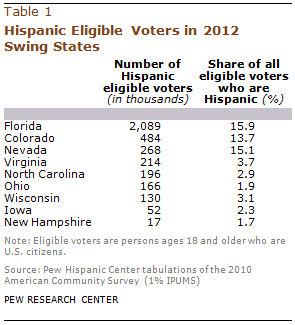 Next: IV. A Profile of Latino Eligible Voters
← Prev Page
Page1Page2You are reading page3Page4Page5Page6
Next Page →

Millennials Make Up Almost Half of Latino Eligible Voters in 2016
The Latino Electorate in 2010: More Voters, More Non-Voters
Dissecting the 2008 Electorate: Most Diverse in U.S. History
Inside the 2012 Latino Electorate
Latino Voters and the 2014 Midterm Elections