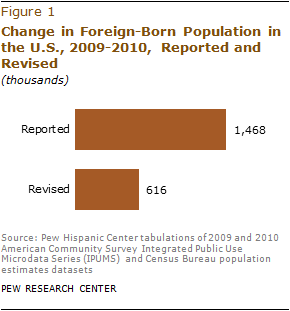 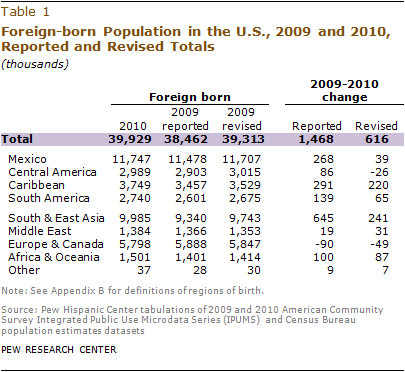 The Pew Hispanic Center revision to the estimated growth in the foreign-born population was undertaken to account for changes between 2009 and 2010 in the Census Bureau’s assumptions about population composition that underlie the reported ACS estimates. This type of discontinuity in assumptions is not uncommon in government datasets, and government agencies often supply guidance to users on dealing with the issue. Pew Hispanic’s revised estimate smoothes out these discontinuities by employing the Census Bureau’s own revised and consistent set of underlying population estimates.

Postcensal population estimates: Annual estimates as of July 1 that take into account the results of a previous census (and components of population change, chiefly births, deaths and net immigration, since that census). Estimates are designated by the year produced—for example, “Vintage 2009.”

Intercensal population estimates: Estimates as of July 1 for years between two censuses that take into account the results of both censuses (and components of population change). Intercensal estimates use various methods to distribute the error of closure across the intercensal period.

Survey weights or sample weights: Values assigned to survey cases to ensure the cases are representative of the total population being sampled and its characteristics. For surveys such as the ACS, the weights are chosen so that the sum of the weights equals the estimated population total (for a group or area).

Control totals: Population estimates for demographic subgroups (e.g., an age-sex-race group) or an area (e.g., state) used as targets for the weighting process in a survey. The sum of the weights for all survey cases in a controlled group or area will be equal to the control total for that population.

When the ACS data for 2009 are revised for consistency with the assumptions that underlie the 2010 ACS, the foreign-born population in 2009 is estimated to have been 39.3 million, 850,000 higher than the original ACS estimate. As a result, the growth in the foreign-born population from 2009 to 2010 is estimated to be less than originally reported (Table 1).

To appreciate the reasons for the gap between the estimates reported by the Census Bureau and the revisions produced by the Pew Hispanic Center, it helps to understand how the government agency collects and processes statistics. The 2010 ACS is based on the latest information from the 2010 Decennial Census; the 2009 ACS is based on the latest information available for that survey—updates of the 2000 Decennial Census. This report discusses how the difference in underlying data can affect estimates of the change in population from 2009 to 2010. A methodological section explains how the ACS estimates for 2009 are revised to make them consistent with the 2010 data. The analysis in this report is intended to clarify the extent to which the apparent change in the foreign-born population from 2009 to 2010 stems from inconsistencies in the underlying population estimates.2

Additional data from other sources indicate that the Pew Hispanic revised estimate of the growth of the foreign-born population is more accurate than implied by the reported ACS data. For example, similar data from the Current Population Survey (CPS), a monthly household survey conducted by the Census Bureau, show a drop in average annual change in the foreign-born population over the decade—from 880,000 per year for 2000-2006 to 510,000 per year for 2006-2010.3 These CPS data have been reweighted by the Pew Hispanic Center to produce a consistent dataset and adjusted to correct for undercount.

Unpublished analysis by the Pew Hispanic Center of ACS data on respondents’ year of immigration and residence one year ago show a decrease in arrivals of immigrants in 2009 compared with earlier in the decade. Additionally, other sources (e.g., National Research Council, 2011; U.S. Customs and Border Protection, 2011) also point to a slowdown of immigration flows, especially those of unauthorized migrants, associated with the onset of the Great Recession in late 2007.

Survey Changes Throughout the Decade

The need for revision of the 2009 ACS estimates stems from the fact that the ACS samples the U.S. population; unlike the decennial census, it does not count the entire population. Therefore, its basic population totals—for the country, states and smaller geographic areas, subdivided by age, gender, race and other characteristics—are imposed from other sources. ACS respondents are assigned sample weights that total to these pre-specified population numbers.

In other words, the 2009 ACS estimates are based on data tied to the 2000 Census and do not reflect the latest information on the size and the characteristics of the U.S. population as determined by the 2010 Census, a more relevant year.

Inconsistencies between the decennial census population counts and the population estimates during the previous decade are nothing new. However, until this decade, this discontinuity did not affect detailed data about the characteristics of the U.S. population, such as the number who are foreign born, because such data at the state and local level came only once a decade from the decennial census itself, via the long form that was mailed to a sample of the nation’s population. But the long form was last used in the 2000 Census. Since 2005, such data now come every year from the ACS, a long-form survey that includes data from more than 2 million households per year.

Discrepancies in Data for Some Groups

Although the 2010 Census national and state counts agreed very closely with the expected total based on the Bureau’s postcensal population estimates for 2010 (Cohn, 2011), there were notable discrepancies for some subgroups—especially those that are prominent in the foreign-born population. This suggests there are similar issues with the 2009 postcensal population estimates that were the basis for the 2009 ACS.

According to an earlier Pew Hispanic analysis, the 2010 Census counted nearly 1 million more Hispanics than would be expected (Passel and Cohn, 2011), or 1.9% more than expected, based on the postcensal population estimates for 2010. The count of non-Hispanic single-race Asians also was higher than would be expected—by about 700,000, or 5%.4 These groups account for almost three-quarters of immigrants. Thus, because the 2009 ACS total for the foreign-born population is derived from the same series of postcensal population estimates, it also can be considered to be an underestimate.

To account for differences between the postcensal estimates used to weight the 2009 ACS and the 2010 Census-based data used to weight the 2010 ACS, the Pew Hispanic Center adjusted the 2009 ACS to agree with the Census Bureau’s recently published new intercensal estimates for 2000 to 2010 (see Terminology and the methodological appendix). These estimates “smooth the transition from one decennial census count to the next” (U.S. Census Bureau, 2011a) by adjusting the published postcensal estimates for each year so the trend is in line with the 2010 Census results. The Census Bureau does this by distributing throughout the decade any discontinuities between those estimates and population counts in the 2010 Census (i.e., the error of closure, see Terminology). The biggest differences between the reported and revised ACS estimates for 2009 are for young adult Asians and Hispanics.5

It is not unusual to see discontinuities attributable to changes in weighting or population counts in government data series. Every January, for example, new population estimates are introduced into the Current Population Survey, leading to discontinuities in estimates of the labor force and the number of employed and unemployed workers. The government agencies involved typically provide users with guidance on the impact of the changes (e.g., Bureau of Labor Statistics, 2011), but they often do not revise previously released data. Only rarely does the Census Bureau issue a new set of survey weights that would enable data users to re-estimate time series and detailed measures.6

The adjustments to the 2009 ACS data are based on sample weights revised by the Pew Hispanic Center that are derived from intercensal population estimates for 2009. The originally reported 2009 ACS data are based on sample weights derived from the postcensal estimates for 2009. The revised weights are derived using a simplified version of the final stages of the ACS weighting procedure. (See the methodological appendix for more details of the revised weighting procedures.) As such, they should be considered approximations to full revisions that would incorporate new information from the 2010 Census into the full ACS weighting methods for 2009.

The estimate of the size of the foreign-born population is created by summing the revised survey weights of ACS respondents who say they are foreign born. This method is similar to that used by the Census Bureau to arrive at its estimate, except for the difference in the survey weights.

Analysis of changes in the foreign-born population throughout the 2000-2010 decade will require consistent data for years other than 2010, 2009 and 2000. These 2009 revisions are a first step in producing a consistent time series of ACS data for the decade. The Pew Hispanic Center plans to produce revised weights for ACS public use files for 2005 through 2008. These data will enable users to compare actual and apparent change for those years.7

Next: Appendix A: Additional Table
← Prev Page
You are reading page1Page2Page3
Next Page →

U.S. Foreign-Born Population: How Much Change from 2009 to 2010?
OverviewAdditional Data Show Similar PatternSurvey Changes Throughout the DecadeDiscrepancies in Data for Some GroupsRevisions to ACS WeightsTerminology
Appendix A: Additional Table Appendix B: Methodology