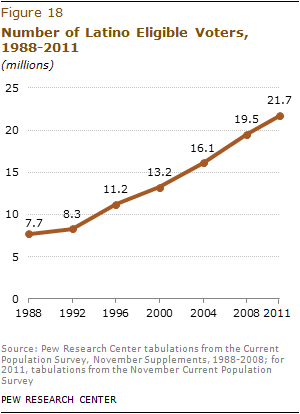 With the 2012 presidential election around the corner, the Pew Hispanic survey reveals that more than half (56%) of Latino registered voters say they have given not much or no thought to the candidates who might be running for president.

Even so, when asked about hypothetical presidential match-ups between President Obama and potential Republican challengers, support for Obama is strong and closely matches results from the 2008 presidential election, when Obama carried 67% of the Latino vote while Republican John McCain took 31% (Lopez, 2008). 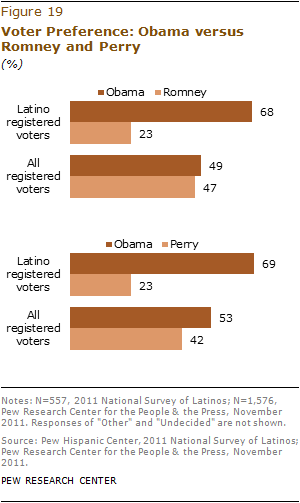 Even among those who disapprove of the way Obama is handling the issue of deportations, a majority support his reelection over Romney—57% to 34%.

In a hypothetical match-up between Obama and Texas Gov. Rick Perry, Obama carries the Hispanic vote 69% to 23%. Among all registered voters, Obama wins 53% to 42% (Pew Research Center for the People & the Press, 2011c).

Among those who disapprove of the Obama administration’s handling of the issue of deportations, 61% support Obama, while 31% support Perry.

The Pew Hispanic survey asked Latinos about their opinion of Florida Republican Sen. Marco Rubio. Rubio, who is of Cuban ancestry, has been discussed as a potential vice presidential running mate to any possible Republican presidential nominee.

The survey reveals that Rubio is not well known among Latinos. When asked about their opinion of Rubio, more than half of Latinos say they have either never heard of him (39%), respond “don’t know” (11%) or can’t rate him (2%). Similarly, more than half (54%) of Latino registered voters say they either have never heard of him (40%), don’t know (10%) or can’t rate him (4%). 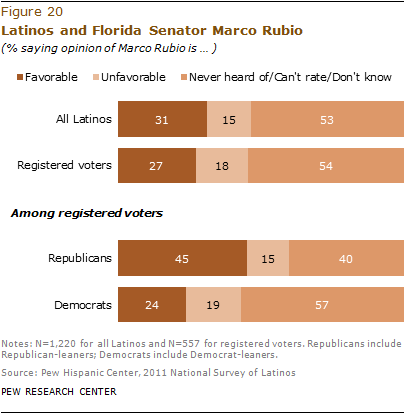 Overall, among Hispanic registered voters, Rubio is viewed more favorably among Republicans (45%) than he is among Democrats (24%). Even so, a significant minority (40%) of Hispanic Republicans, and a majority of Hispanic Democrats (57%), either have never heard of him, don’t know or can’t rate him. 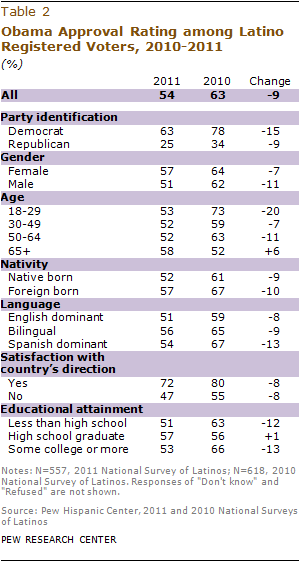 Just over half (54%) of Latino registered voters say they approve of the way in which Barack Obama is handling his job as president, a higher share than among all registered voters (46%) (Pew Research Center for the People & the Press, 2011c). 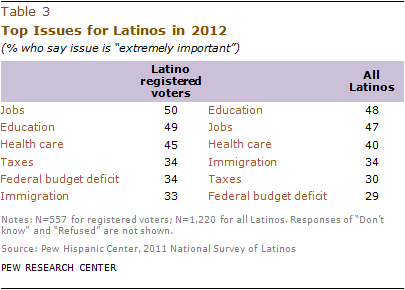 Latino registered voters rank pocketbook and family issues as their top concerns, according to the Pew Hispanic survey. Half say the issue of jobs is extremely important to them personally, followed by education (49%) and health care (45%).

Compared with 2010, the same three issues are rated as personally important to Hispanic registered voters in 2011, though relative positions have changed. In 2010, more Latino registered voters said that education (58%) was extremely important to them, followed by jobs (54%) and health care (51%) (Lopez, 2010). Even so, today’s top three issues reflect rankings observed previously in Pew Hispanic Center surveys (Lopez and Livingston, 2009).

Next: VII. Views of the Political Parties and Party Identification
← Prev Page
Page1Page2Page3Page4Page5You are reading page6Page7Page8Page9
Next Page →