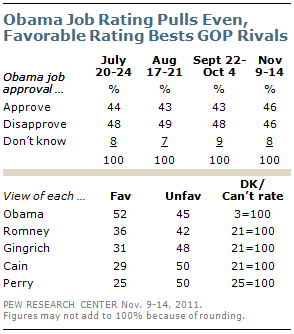 With much of the recent political focus on the ever-changing Republican presidential nomination race, Barack Obama’s job rating has improved modestly over the past month. And a majority of Americans continue to hold a favorable personal opinion of Obama. This is not the case for his main GOP rivals, whom he mostly bests in test election measures.

Currently, as many approve of Obama’s job performance as disapprove; from July through early October his job ratings were more negative than positive.

A majority of Americans (52%) still have a favorable personal impression of Obama, while 45% view him unfavorably. Among the leading GOP candidates, none is viewed favorably on balance. Slightly more have an unfavorable opinion of Mitt Romney (42%) than a favorable opinion (36%), and the balance of opinion toward Herman Cain, Newt Gingrich and Rick Perry is even more negative.

While Obama’s overall job rating has ticked up recently, few Americans (35%) approve of the way he is handling the economy. However, the percentage of Americans saying that they have heard mostly bad news about the economy has declined steadily over the past three months. Further, Obama gets more positive ratings for dealing with foreign policy (46% approve), and a resounding 75% approve of his decision to remove all combat troops from Iraq at year’s end.

The latest national survey by the Pew Research Center for the People & the Press, conducted Nov. 9-14 among 2,001 adults, including 1,576 registered voters, finds that Obama holds clear advantages over Cain, Gingrich and Perry in head-to-head matchups among 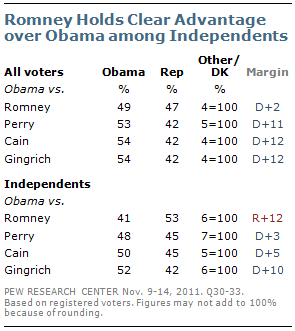 registered voters. As was the case in October, however, Obama runs about even with Romney: 49% say they would vote for Obama or lean toward Obama while 47% support or lean toward Romney.

Obama continues to trail Romney by a wide margin among independent voters. Currently, 53% of independents favor Romney while just 41% support Obama. In matchups with other leading GOP candidates, Obama leads or runs about even.

The race for the GOP nomination continues to be fluid. About one-in-five Republican and Republican-leaning independent voters (23%) would like to see Romney win the nomination. In the current survey, about the same percentage (22%) favors Cain while 16% back 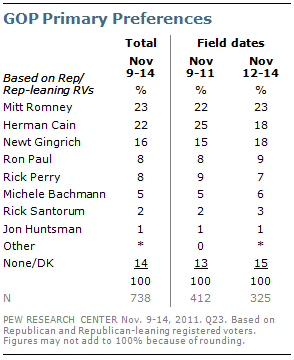 Gingrich, double the percentage from October. Just 8% favor Perry, down from 17% about a month ago.

Opinions about the truthfulness of allegations of sexual harassment against Cain have changed little since early November. Currently, 39% of registered voters say the allegations are true, compared with 26% who think they are false. Cain’s supporters overwhelmingly reject the allegations, while supporters of other candidates are more likely to say they are true. 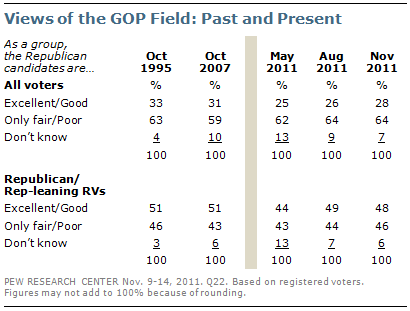 Republican voters remain generally unimpressed with the quality of the GOP field. Only about half of Republican and Republican-leaning voters (48%) say the Republican candidates are excellent or good while nearly as many (46%) say they are only fair or poor. GOP voters’ ratings of the field have shown little improvement since May and are at least as low as ratings for Republican candidates at comparable points in the 2008 and 1996 campaigns. 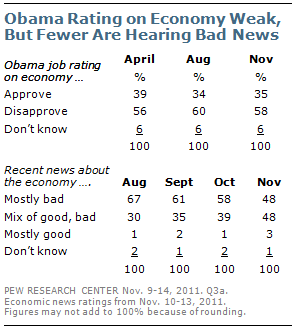 The survey finds that Obama’s personal image remains positive and his overall job rating has drawn even, but his approval on the economy remains low. Moreover, just 35% say Obama is doing as much as he can to improve economic conditions, while 61% say he could be doing more. In March 2009, two months into Obama’s presidency, these numbers were virtually reversed (60% doing as much as he can, 30% could do more).

However, the public is hearing less negative news about the economy than it did just a month ago. The most recent Pew Research Center News Interest Index found that as many say they are hearing a mix of good and bad economic news as say the news has been mostly bad (48% each). In early October, 58% said they were hearing mostly negative news about the economy and in early August 67% said the economic news was mostly bad – the highest percentage in more than two years. (For more, see “Fewer Hearing Mostly Bad News about Economy,” Nov. 15, 2011). 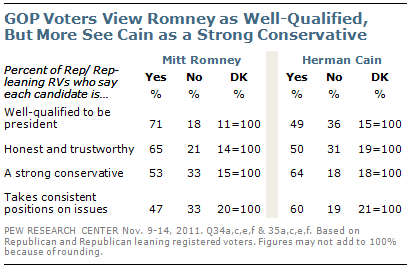 By contrast, far more GOP voters say Cain is a strong conservative (64%) and that he takes consistent positions on issues (60%) than say these descriptions apply to Romney (53% and 47%, respectively). 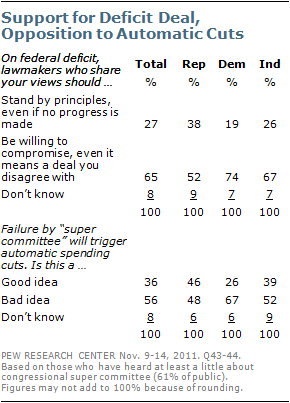 Among those who have heard at least a little about the super committee, there is broad support for compromise: 65% say lawmakers who share their views on the budget deficit should be willing to compromise, even if it results in a deal they disagree with; just 27% say the lawmakers who they agree with should stand by their principles, even if it means no progress is made.

In two previous showdowns over the debt and deficit – in April, amid threats of a government shutdown and July as a possible government default loomed – majorities also favored compromise. There continue to be wide partisan differences in views of compromise. Among those who have heard at least a little about the super committee, 74% of Democrats and 67% of independents support compromise, compared with 52% of Republicans.

Most of those who have heard about the super committee have a negative reaction to possible automatic cuts in spending, including both defense and domestic programs, that will be triggered if Congress fails to pass a deficit reduction plan. Democrats and independents generally view the automatic cuts as a bad idea, but Republicans are divided: 48% say they are a bad idea while nearly as many (46%) say they are a good idea.

Public support for a balanced approach to deficit reduction – both cuts in major programs and tax increases – has been consistent over the past year. Currently, 62% say the best way to reduce the federal budget deficit is through a combination of spending cuts and tax increases; just 17% say the focus should be mostly on program reductions and 8% say it should be mainly on tax increases. Republicans are less supportive of a balanced approach than are Democrats or independents. Even among Republicans, however, 53% favor a combination of spending cuts and tax increases. That compares with 71% of Democrats and 63% of independents.

Next: Section 1: The 2012 Election
← Prev Page
You are reading page1Page2Page3Page4Page5Page6
Next Page →