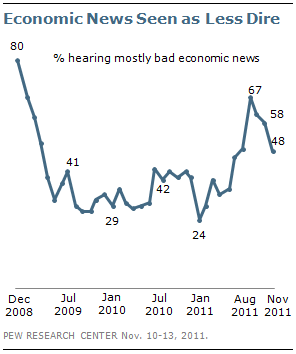 The public’s perceptions of economic news, which took a decided downturn in August, are much less negative today. Currently, 48% say they are hearing mostly bad news about the economy, down from 58% in October and 67% in August. Still, very few Americans say news about the economy is mostly good (3%). Nearly half (48%) see the news as a mix of good and bad.

The latest weekly News Interest Index survey, conducted Nov. 10-13 among 1,000 adults by the Pew Research Center for the People & the Press, finds that 32% say they followed news about the Penn State scandal, which led to the firing of legendary football coach Joe Paterno, more closely than any other news. By comparison, 18% cite news about the economy as their top story while 12% cite sexual harassment accusations against GOP presidential candidate Herman Cain. 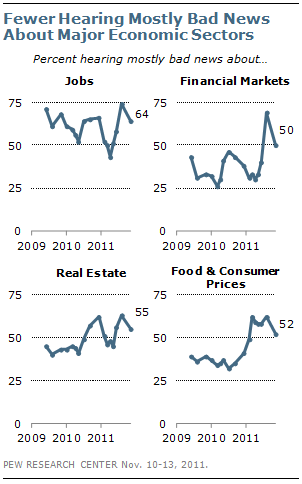 The percentage saying they were hearing mostly bad news about the job situation reached 74% in August, as high a level as recorded by Pew Research surveys. In the 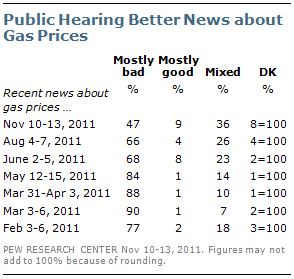 current survey, 64% say they are hearing mostly bad news about jobs, which is 10 points lower than in August but still much higher than in the spring (43% in early April). 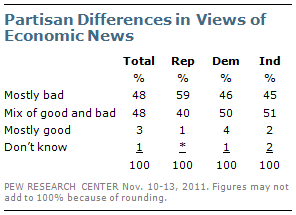 There continue to be partisan differences in views of the tone of overall economic news. Currently, 59% of Republicans say news about the economy is mostly bad, compared with 46% of Democrats and 45% of independents.

However, the decline in negative perceptions has come across partisan lines: In August, 71% of Republicans, 69% of independents and 62% of Democrats said the news they were hearing about the economy was mostly bad.

News about the arrest of a former assistant coach at Penn State on sex abuse charges — and its many ramifications – is the week’s top story both in public interest and in news coverage. 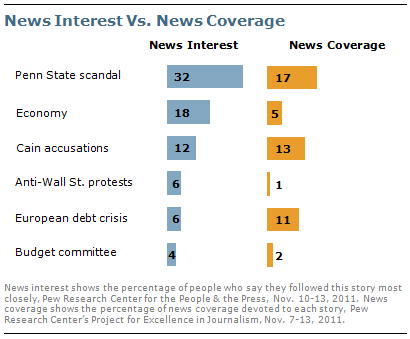 Nearly a third (32%) cite the Penn State scandal as their most closely followed story. This story accounted for 17% of coverage last week, according to a separate analysis by the Pew Research Center’s Project for Excellence in Journalism (PEJ).

The 2012 presidential campaign accounted for a total of 24% of all news coverage. About half of that (13% of total coverage) focused on allegations that Herman Cain sexually harassed several women in the late 1990s when he was president of the National Restaurant Association.

Nearly Half Say Cain Accusations Have Been Overcovered 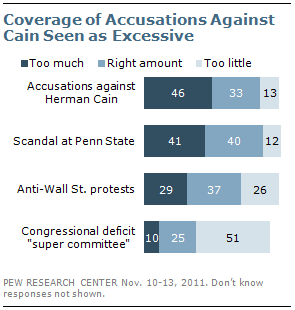 Nearly half of the public (46%) say news organizations have given too much coverage to the sexual harassment allegations against Cain. Fewer (33%) say this story has received the right amount of attention and just 13% say it has received too little.
Perceptions of coverage of the Penn State scandal are more mixed: 41% say the story received too much coverage, while 40% say it received the right amount. Just 12% say it received too little.
By contrast, about half (51%) say the congressional “super committee” – now negotiating behind closed doors to find ways to significantly reduce government spending and federal deficit – has gotten too little attention. 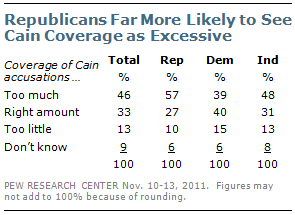 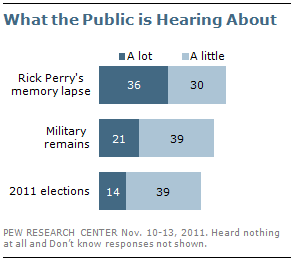 Partisans are about equally likely to say they heard at least a little about Perry’s prolonged effort to recall which government agencies he would eliminate if elected. One week earlier, three-quarters of the public (75%) had heard either a lot (51%) or a little (24%) about the sexual harassment allegations made against Cain.

Many also had not heard about news that broke late in the week about the mishandling of the remains of U.S. service members killed in Iraq and Afghanistan. About two-in-ten (21%) say they heard a lot about reports that the mortuary at Dover Air Force Base had dumped cremated body parts in a landfill. About four-in-ten (39%) say they heard a little about this, while 40% say they heard nothing at all.

With elements of the story continuing to unfold all week, the sexual abuse scandal at Penn State University was the top story for 32% of the public, much higher than the second ranking story, the economy, at 18%. About a third (34%) say they very closely followed the Penn State news. Men and women are about equally likely to say they followed this news very closely and that it was their top story of the week.

About four-in-ten (39%) say they followed news about the condition of the U.S. economy very closely, a level of interest comparable to recent weeks.

About a quarter (24%) say they followed news about the allegations against Cain very closely; 12% say this was the news they followed most closely. Partisans are about equally likely to say they followed this news very closely (28% of Republicans, 27% of Democrats and 21% of independents). That holds true for men and women as well (26% and 22%, respectively). 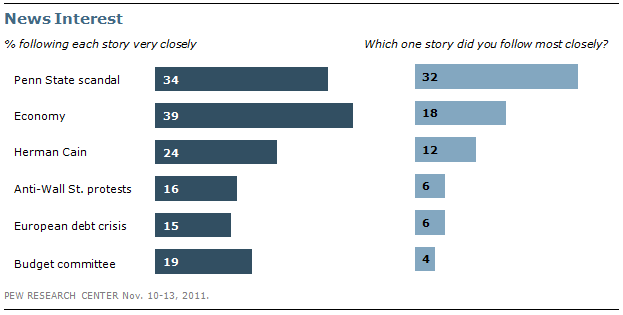 The European debt crisis accounted for 11% of coverage amid efforts to help both Italy and Greece. Developments included a promise by Italian Prime Minister Silvio Berlusconi to resign once the nation’s legislature enacted austerity measures. Public attention, though, was modest: 15% say they followed this news very closely and 6% say this was the news they followed most closely.

There was also modest interest in the work of the “super committee” on Capitol Hill which is trying to negotiate a deficit reduction deal ahead of a Nov. 23 deadline. About two-in-ten (19%) say they followed this news very closely; 4% say this was their top story. Partisans are equally likely to say they followed news about the negotiations very closely. With the negotiations taking place largely behind closed doors, news about the super committee has been limited as well. The story accounted for just 2% of coverage last week, according to PEJ.

These findings are based on the most recent installment of the weekly News Interest Index, an ongoing project of the Pew Research Center for the People & the Press. The index, building on the Center’s longstanding research into public attentiveness to major news stories, examines news interest as it relates to the news media’s coverage. The weekly survey is conducted in conjunction with The Project for Excellence in Journalism’s News Coverage Index, which monitors the news reported by major newspaper, television, radio and online news outlets on an ongoing basis. In the most recent week, data relating to news coverage were collected Nov. 7-13, and survey data measuring public interest in the top news stories of the week were collected Nov. 10-13 from a nationally representative sample of 1,000 adults.