Mitt Romney continues to run even with Barack Obama in a hypothetical matchup for the 2012 presidential election. Among all registered voters, 49% say they would back Obama, 47% Romney, virtually unchanged from a month ago when 48% supported each candidate. By contrast, Obama holds double-digit leads over Herman Cain, Newt Gingrich and Rick Perry.

Regardless of which GOP candidate wins the nomination, at least 80% of Republican voters intend to back their party’s nominee. And while enthusiasm for Romney in the primaries may be lagging, there are no signs that Republicans would not back him if he wins the nomination. Fully 87% of Republicans say they would support him over Obama, and 76% say they would support him strongly. This is as high as the level of intense support Cain, Gingrich or Perry would receive from Republican voters.

Similarly, there is little to suggest that the outcome of the GOP primaries would affect Democratic voters, roughly 90% of whom intend to back Obama, regardless of his opponent. At least eight-in-ten Democrats say they would support Obama strongly, with no significant difference in intensity depending on the GOP nominee. (For details on the 2012 matchups, see detailed tables at the end of this report).

There is no clear frontrunner nationwide for the GOP primary – 23% of Republican and Republican leaning registered voters favor Romney for the party nomination, while 22% support Cain, and 16% back Gingrich. No other candidate breaks double-digits. 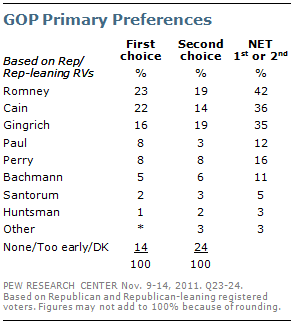 A look at Republican voters’ second-choice candidates reinforces the separation between the top three candidates and the rest of the field. In addition to the 23% who favor Romney for the nomination, another 19% say he would be their second choice; thus, 42% pick Romney as one of their preferred options. More than a third (36%) pick Cain as either their favorite (22%) or second-choice (14%) candidate and about the same number (35%) names Gingrich as either their first (16%) or second (18%) choice. The next closest candidate – Perry – receives less than half as much support as any of these three. 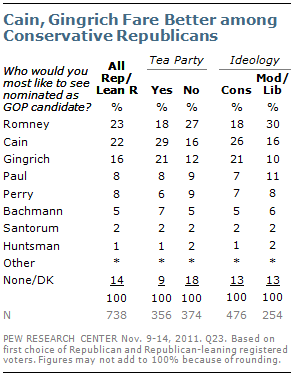 Cain holds a modest edge among Republican and Republican-leaning voters who agree with the Tea Party Republicans: 29% favor Cain, while 21% back Gingrich and 18% favor Romney. Romney holds a sizeable lead among non-Tea Party Republican voters, with 27% backing him compared with 16% for Cain and 12% for Gingrich.

Roughly six-in-ten Republican voters describe themselves as conservative, and their support is divided between Cain (26%), Gingrich (21%), and Romney (18%). Among the smaller share who say they are moderate or liberal, Romney holds a commanding lead, with 30% backing him compared with 16% for Cain and 10% for Gingrich.

Cain also gets significantly more support from higher-income Republicans than those with lower incomes. Republican voters with family incomes of $75,000 or more back Cain at nearly twice the rate of those with incomes of less than $30,000 (28% vs. 15%). 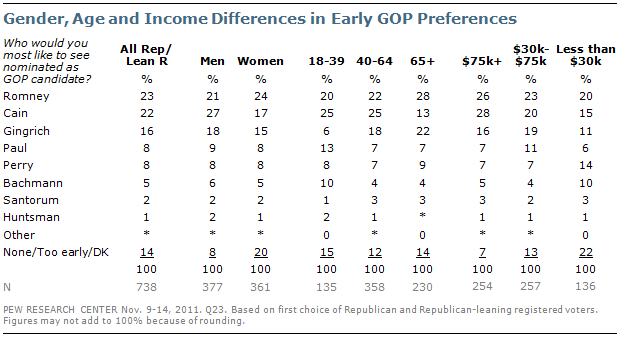 As more information about the sexual harassment allegations against Cain has surfaced, a growing proportion of voters feel able to assess the veracity of the claims. While the balance of opinion has not shifted overall, Republican and Democratic assessments of the situation are growing further apart.

Among Republicans and Republican leaners, most who agree with the Tea Party reject the accusations; 56% say they are false and just 20% true. Among 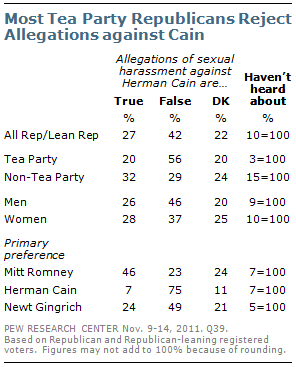 Three-quarters (75%) of Republican and GOP-leaning voters who favor Cain for the party’s presidential nomination say the claims are false; just 7% think they are true. By a two-to-one margin (49% false, 24% true), Gingrich supporters also reject the claims. Romney supporters differ substantially; nearly half (46%) of Romney’s supporters say the allegations are true, while just 23% believe they are false. 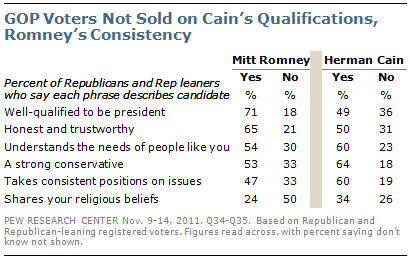 Fully 71% of Republican and Republican-leaning voters say that Mitt Romney is well- qualified to be president, and 65% describe him as honest and trustworthy. Republicans’ assessments of Herman Cain are more divided on these traits. Only about half (49%) of Republican-oriented voters say that Cain is well- qualified to be president, while 36% say he is not. And half (50%) say Cain is honest and trustworthy, while 31% do not think this describes Cain.

One particular issue for Romney is his support of a major healthcare overhaul when he was governor of Massachusetts. By more than two-to-one, more Republicans and Republican 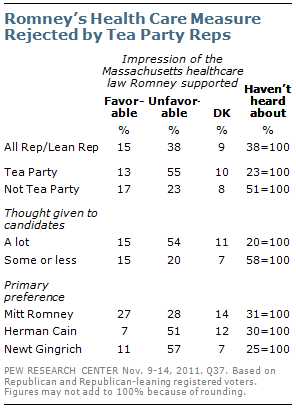 leaners have an unfavorable (38%) than favorable (15%) opinion of this law, though nearly half offer either no opinion (9%) or have heard nothing about it (38%).

Disapproval of Romney’s Massachusetts health care record is particularly high among engaged Republican voters: 54% of those who have given a lot of thought to the campaign and candidates say they have an unfavorable opinion of the Massachusetts law, while just 15% view it favorably. A comparable majority (55%) of Republicans and GOP leaners who agree with the Tea Party view the law unfavorably, while just 13% view it favorably.

Most Cain and Gingrich supporters are aware of the Massachusetts health care law and disapprove of it. Romney supporters are more divided: 27% view the law favorably while 28% view it unfavorably; the rest either offer no opinion (14%) or say they have not heard about it (31%).

Republicans continue to show little enthusiasm for the field of candidate running for the party’s presidential nomination. Among all Republican and Republican-leaning voters, 48% say that as a group the GOP candidates are excellent or good, while 46% rate them as only fair or poor. 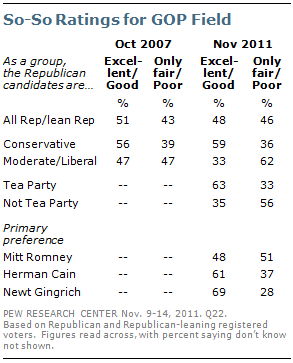 The balance of opinion was somewhat more positive four years ago. As Republicans evaluated a field then headed by Rudy Giuliani, John McCain, Fred Thompson, Mitt Romney and Mike Huckabee, more rated the candidates as excellent or good (51%) than fair or poor (43%).

Moderate and liberal Republican and Republican-leaning voters are particularly unenthusiastic about the field this year. Just 33% rate the current crop of candidates favorably, while 62% say they are only fair or poor. In October 2007, nearly half (47%) offered favorable assessments of the GOP candidates.

The share of Republican and Republican leaning voters who say they have given a lot of thought to the 2012 candidates has spiked from 39% to 52% over the last month. 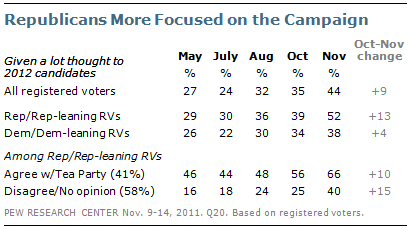 Democrats and Democratic leaners, by comparison, are far less engaged in a campaign focused on the looming Republican primaries and caucuses.

At 52%, the share of Republicans closely tracking the campaign is higher than four years ago. Just 42% of Republicans and Republican leaners had given a lot of thought to the 2008 candidates in November of 2007.

There continues to be a sizeable engagement gap between Tea Party and non-Tea Party Republicans – 66% of the former have given a lot of thought to the candidates compared with 40% of the latter. But the recent jump in engagement crosses both segments of the party. In particular, 40% of Republicans and Republican leaners who say they either disagree or have no opinion about the Tea Party movement have now given a lot of thought to the candidates, up from 25% a month ago, and just 18% as recently as July.

Romney Viewed as Most Electable 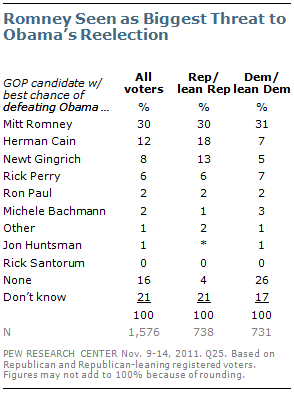 Among Republican and Republican-leaning voters, 30% say Romney has the best chance of beating Obama, 18% say Cain, and 13% Gingrich. (This compares to 23% who support Romney as their first choice for the nomination, 22% who support Cain, and 16% Gingrich).

And as Democrats and Democratic leaners look at the Republican field, only Romney stands out as a significant threat, with 31% saying he has the best chance of defeating Obama. The next closest candidates are at 7% (both Cain and Perry). Fully 26% of Democrats say that none of the GOP candidates has a chance of beating Obama this fall – just 4% of Republicans offer this opinion.

Next: Section 2: Views of Obama and Congressional Leaders
← Prev Page
Page1You are reading page2Page3Page4Page5Page6
Next Page →