A year out from the 2012 election, as many Americans approve of the job Obama is doing as president (46%) as disapprove (46%). This marks a modest improvement from August and October when slightly more disapproved than approved of Obama’s job performance.

Low Marks for Obama on Economy

On specific issues, Obama receives negative ratings for his handling of the economy, budget deficit and immigration policy; he fares better when it comes to his handling of energy policy and foreign policy.

About half disapprove of how Obama is handling immigration policy (49%); 32% approve. On this issue, the public has consistently expressed more disapproval than approval since Pew Research first asked about immigration in November 2009.

Slim pluralities approve of how Obama is handling foreign policy (46%) and energy policy (44%). Obama has performed comparatively well on these issues over time: At no point have significantly more disapproved than approved of his handling of foreign or energy policy.

How Obama Compares with Past Presidents

In addition to his low approval ratings on the economy, most say Obama could be doing more to improve economic conditions. About six-in-ten (61%) say he could be doing more, while far fewer (35%) say he is doing as much as he can. These ratings have become somewhat more negative since February. 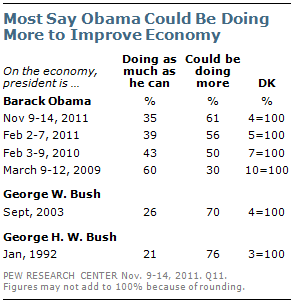 While negative, ratings of Obama’s economic efforts are better than those given to George W. Bush and George H.W. Bush at comparable points in their presidencies. In September 2003 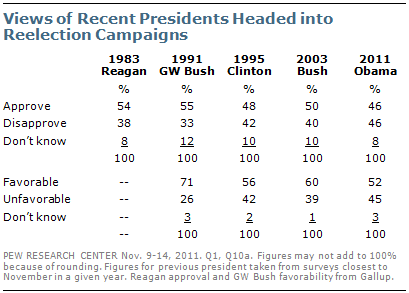 On the broader measures of approval and favorability, however, Obama lags behind previous presidents at comparable points in their terms. The incumbent presidents of the past two decades, from Reagan to George W. Bush, have had positive job approval ratings, on balance, a year ahead of the election. This is not the case for Obama, whose ratings are mixed.

Both George W. Bush and his father had significantly higher favorable ratings at this point in their presidencies than Obama does today. However, Obama’s favorable rating is about the same as Bill Clinton’s a year before he won reelection in 1996. 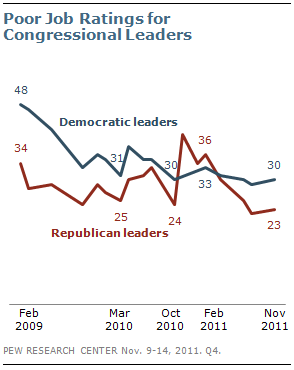 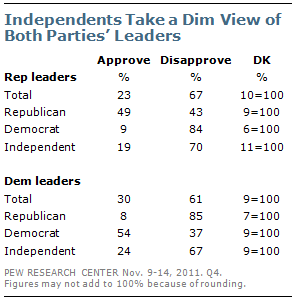 Next: Section 3: The Deficit and the Super Committee
← Prev Page
Page1Page2You are reading page3Page4Page5Page6
Next Page →