As the Nov. 23 deadline approaches for the congressional “super committee” to offer a deficit reduction proposal, the public continues to rank the budget deficit second to the job situation among its top national economic concerns. At the same time, 62% of Americans say the best approach to deficit reduction would include both spending cuts and tax increases, with few advocating an approach that focuses primarily on either major program cuts (17%) or tax increases (8%).

Among those who have heard about the super committee and its task, majorities of Republicans, Democrats and independents say they would like lawmakers who share their views to compromise. And 56% say the automatic cuts in government spending that will be triggered if the super committee does not come up with a plan that passes are a bad idea. 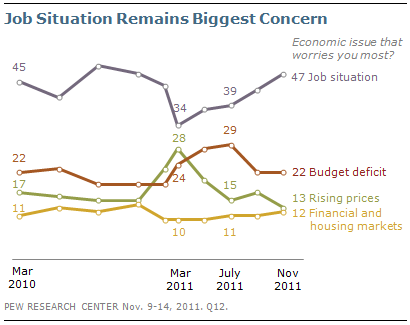 Public concern over the job situation trumps concerns about the deficit, rising prices, and the financial and housing markets. Nearly half (47%) say the job situation is the national economic issue that most worries them, up from 39% in July.

The second most cited worry is the budget deficit (22%), although fewer now say this than did so this summer. Smaller percentages name rising prices (13%) or problems in the financial and housing markets (12%) as their biggest economic concern.

Both Democrats and independents are more than twice as likely to cite jobs as their top economic concern as to name any other worry. More than half of Democrats (55%) and 46% of independents say this. 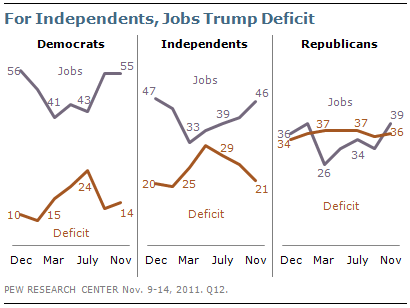 While the job situation also tops the list of worries among Republicans, the deficit rivals jobs as the most cited concern. Today, 39% of Republicans name jobs, while 36% name the deficit.

Most Back Mixed Approach to Deficit Reduction

As has been the case throughout the past year, about six-in-ten Americans (62%) say the best way to reduce the federal budget deficit includes a combination of both cuts in major programs and increases in taxes; just 17% say the focus should mostly be on program cuts and only 8% say it should mostly be on tax increases. 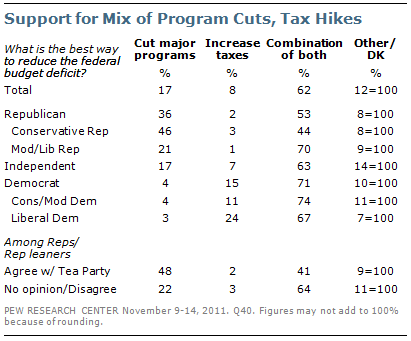 Currently, substantial majorities of Democrats (71%) and independents (63%) say focusing on both cutting spending and increasing taxes is the best approach to reducing the deficit. A narrow majority (53%) of Republicans agree, although about a third (36%) say deficit reduction should mostly come through program cuts. Republican opinion was more divided in July (46% combination of both, 39% cuts in major programs).

About six-in-ten have heard either a lot (21%) or a little (40%) about the congressional super committee, whose job is to propose a plan to significantly reduce the budget deficit. Overall, Republicans (68%) are somewhat more likely than independents (60%) to be aware of the super committee. Among Democrats, 63% had heard at least a little about the congressional panel.

Among those who have heard about the super committee, nearly two-thirds (65%) say they would like lawmakers who share their views on the deficit to be willing to compromise, even if that results in a deal they may not agree with; about a quarter (27%) say lawmakers should stand by their principles, even if nothing gets done. 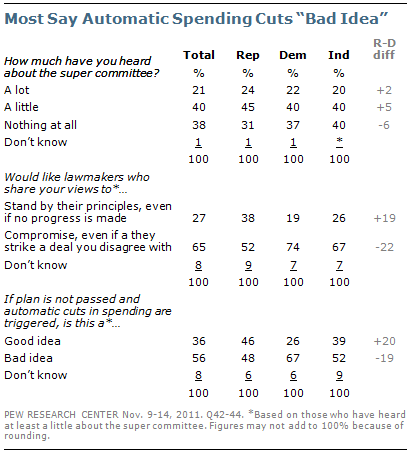 Nearly three-quarters of Democrats (74%) and two-thirds of independents (67%) say they would prefer lawmakers to compromise. A modest majority of Republicans (52%) also say this, while 38% say lawmakers should stand by their principles.

Among Democrats and Democratic leaners, large majorities of both liberals (78%) and moderates and conservatives (72%) favor compromise.

The public reacts negatively to the prospect of automatic spending cuts, including cuts in defense and domestic programs, if the super committee fails to agree on a plan that passes Congress. Just 36% see these automatic cuts as a good idea while 56% say this is a bad idea.

Democrats overwhelmingly say this is a bad idea rather than a good idea (67% vs. 26%). By comparison, Republicans are split over these automatic cuts (46% good idea, 48% bad idea). Among Republicans and GOP leaners, Tea Party supporters are more likely than others to say these cuts are a good idea (50%, compared with 40% of other Republicans).

Next: Section 4: Views of Iraq
← Prev Page
Page1Page2Page3You are reading page4Page5Page6
Next Page →