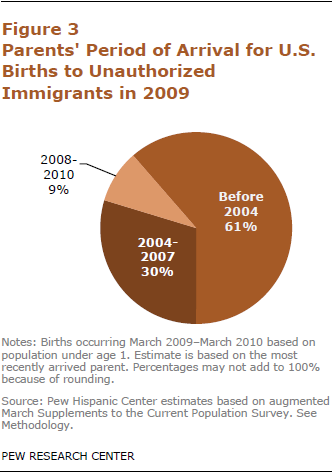 These newborns represented 8% of all births during this period, the same share as for the previous year. Unauthorized immigrants represent about 4% of the U.S. population but are relatively young and have high birthrates, which is why their newborns make up a higher share of all births. 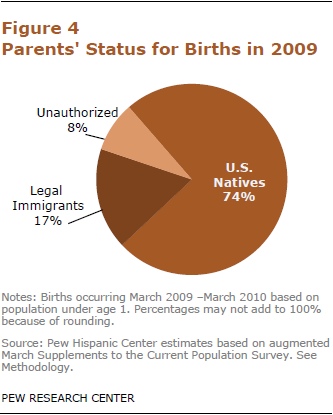 The Pew Hispanic Center analysis also examined year-of-arrival patterns for unauthorized immigrant parents of babies born from March 2009 to March 2010, to see how long the parents had been in the United States before their children were born. If year of arrival was available for both parents, the analysis used the most recently arrived parent. 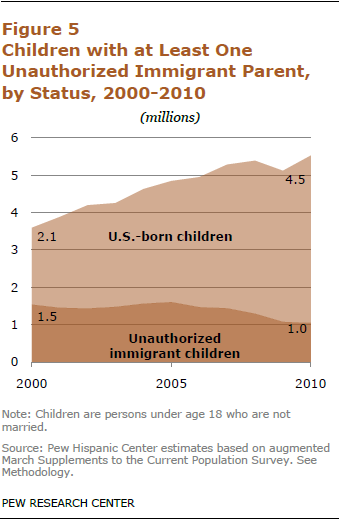 As with previous analyses, the Pew Hispanic Center finds that among all children of unauthorized immigrants—an estimated 5.5 million in 2010—a growing share was born in the United States and therefore they are U.S. citizens by birthright.

The 14th Amendment to the U.S. Constitution, adopted in 1868, grants an automatic right to citizenship to anyone born in the United States. In recent months, some prominent national and state elected officials have urged that this right be repealed at the national or state level, on the grounds that it attracts unauthorized immigrants to the United States. A nationwide survey by the Pew Research Center in October found that registered voters are split (46% to 46%) about whether to amend the Constitution to end birthright citizenship. A majority of Republican respondents (67%) favor amending the Constitution, compared with about half of independents (48%) and a minority of Democrats (30%).