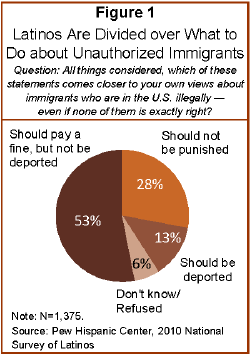 The national political backlash against illegal immigration has created new divisions among Latinos and heightened their concerns about discrimination against members of their ethnic group-including those who were born in the United States or who immigrated legally. 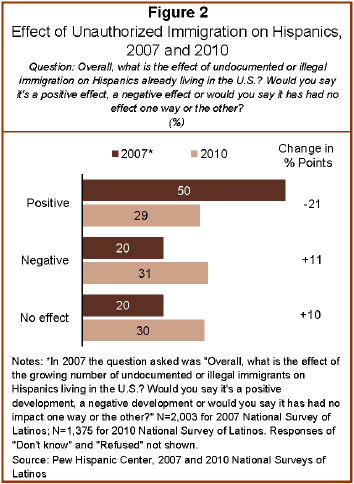 Hispanics are also divided about the impact of illegal immigration on Hispanics already living in the U.S. Roughly equal shares say the impact has been positive (29%), negative (31%) or made no difference (30%). This mixed judgment stands in sharp contrast to views that Latinos expressed on this subject in 2007. Back then, fully half (50%) of Latinos said the impact was positive, while just 20% said it was negative.1 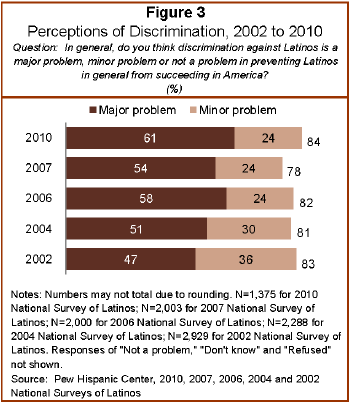 In the new survey, Latinos are also split over whether immigrant and native-born Latinos are working together to achieve common political goals. About half (45%) say they are, and half (46%) say they are not. Both the native born (who comprise 47% of the adult Latino population) and the foreign born (who comprise 53%) are roughly equally divided on their perceptions of political solidarity.

The native born and foreign born have different views on many topics explored in the survey. For example, seven-in-ten (70%) foreign-born Latinos say discrimination against Hispanics is a major problem preventing Latinos from succeeding in America. Less than half (49%) of the native born agree. And when it comes to their views of immigrants, fewer than seven-in-ten native-born Hispanics say immigrants strengthen the country, while 85% of immigrant Hispanics say the same.

At 47 million strong, Latinos are the nation’s largest minority group, comprising nearly 15% of the total U.S. population. Some 38% of all Latinos are immigrants, and an estimated 19% are unauthorized immigrants.

The findings are from a new national survey of 1,375 Latino adults conducted by landline and cellular telephone, in English and Spanish, from August 17 through September 19, 2010. The margin of error is plus or minus 3.3 percentage points for the full sample and larger for subgroups. For details on the survey methodology, see Appendix A.

While the survey finds differences among Latinos on several questions related to illegal immigration, it also finds many points of broad agreement—especially when it comes to enforcement policies and proposals.

On birthright citizenship, nearly eight-in-ten (78%) Latinos say the Constitution should be left as is, compared with 56% of the general public who say the same. And when it comes to who should enforce the nation’s immigration laws, more than three-quarters (77%) Latinos say it should be the exclusive responsibility of federal authorities, while just 15% say the local police should play a more active role. On both questions, the native born and the foreign born hold similar views.

Finally, the vast majority of Latinos—79%—disapprove of the first-of-its-kind Arizona law enacted this year that gives police broad powers to check the immigration status of people they stop for other reasons whom they suspect may be in this country illegally.2 By contrast, the general population approves of the measure by a ratio of two-to-one (Pew Research Center for the People & the Press, 2010a).

No Increase in Reports of Discrimination

Despite Latinos’ rising concerns about suffering from a backlash triggered by illegal immigration, the new survey finds no increase over past years in the share of Latinos who report that they or someone they know have been targets of discrimination or have been stopped by the authorities and asked about their immigration status.

About a third of all Hispanics (34%) say they, a member of their family or a close friend have experienced discrimination in the past five years because of their race or ethnic group. The figure is largely unchanged from 2009, when it stood at 32% (Pew Hispanic Center, 2009). And just 5% say they have been stopped by the police or other authorities and asked about their immigration status, down from 9% who said the same in 2008 (Lopez and Minushkin, 2008).

More Satisfied with the Nation’s Direction and Their Lives 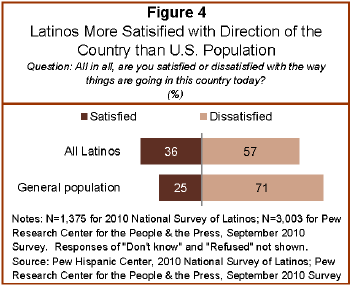 Moreover, more than a third of all Hispanics (36%) say they are satisfied with the current overall direction of the country, up from 25% who said the same in 2008 (Lopez and Minushkin, 2008). On this question, Hispanics are more upbeat than all Americans. Only about a quarter (25%) of the general public said in late summer they were satisfied with the way things in the country were going (Pew Research Center for the People & the Press, 2010b).

When it comes to their own lives, Latinos are generally upbeat. Nearly seven-in-ten rate the quality of their lives as either “excellent” (24%) or “good” (45%), virtually unchanged from three years ago (Pew Hispanic Center, 2007).

The 2010 National Survey of Latinos (NSL) focuses on the views and opinions of Latinos about immigrants, illegal immigration and immigration policy. The survey was conducted from August 17 through September 19, 2010, among a randomly selected, nationally representative sample of 1,375 Latino adults, 542 of whom are native born and 833 of whom are foreign born. The survey was conducted in both English and Spanish on cellular as well as landline telephones. For more details, see Appendix A.

Next: II. Views of Immigrants
← Prev Page
You are reading page1Page2Page3Page4Page5Page6
Next Page →