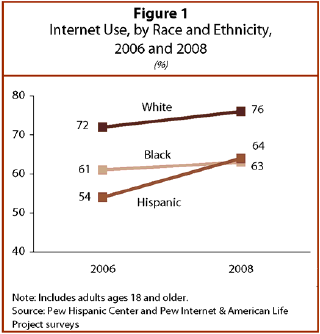 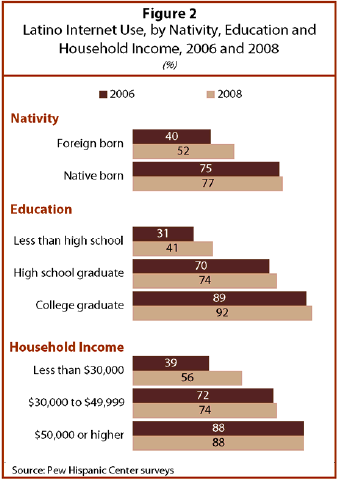 In order to maintain comparability across years, all results are based upon landline telephone surveys conducted by the Pew Hispanic Center and the Pew Internet & American Life Project from February to October 2006, and from August to December 2008. During this same time period, there was a dramatic increase in the proportion of people living in households with only cell phones, and no landline telephones.3

The rapid increase in cell-only populations, particularly for Latinos and African Americans, coupled with the fact that people in cell-only households tend to be slightly more likely to use other forms of technology than people who are reachable via landline telephone, suggests that if anything, the results shown here may underestimate increases in internet use, especially for Latinos and African Americans.4

All references to whites, blacks, Asians and others are to the non-Hispanic components of those populations.

“Foreign born” refers to persons born outside of the United States to parents neither of whom was a U.S. citizen. Foreign born also refers to those born in Puerto Rico.

“Native born” refers to persons born in the United States and those born abroad to parents at least one of whom was a U.S. citizen.

Next: II. Internet Use
← Prev Page
You are reading page1Page2Page3Page4Page5
Next Page →

Closing the Digital Divide: Latinos and Technology Adoption
The Latino Electorate: An Analysis of the 2006 Election
Latinos and Digital Technology, 2010
Digital Divide Narrows for Latinos as More Spanish Speakers and Immigrants Go Online
Unemployment Rose Sharply Among Latino Immigrants in 2008