Fifty-six percent of Latinos in the U.S. use the internet

Latinos comprise 14% of the U.S. adult population and about half of this growing group (56%) goes online. By comparison, 71% of non-Hispanic whites and 60% of non- Hispanic blacks use the internet. Several socio-economic characteristics that are often intertwined, such as low levels of education and limited English ability, largely explain the gap in internet use between Hispanics and non-Hispanics.

Just one in three Latinos who speak only Spanish go online

Internet use is uniformly low for whites (32%), Hispanics (31%), and African Americans (25%) who have not completed high school. However, 41% of Latino adults have not finished high school, compared with about one in ten non-Hispanic whites and one in five African Americans. The same pattern is evident at the other end of the spectrum of educational attainment. College-educated adults all have equally high levels (about 90%) of internet use regardless of race or ethnicity, yet the college educated make up a smaller share of the Latino population when compared with non-Hispanics.

A statistical analysis of the survey results shows education and language are each highly significant factors when other differences in group characteristics are taken into account. When the different levels of language or education are controlled statistically, Hispanics and non-Hispanics show similar levels of internet use.

Latinos Online: Summary of Findings at a Glance 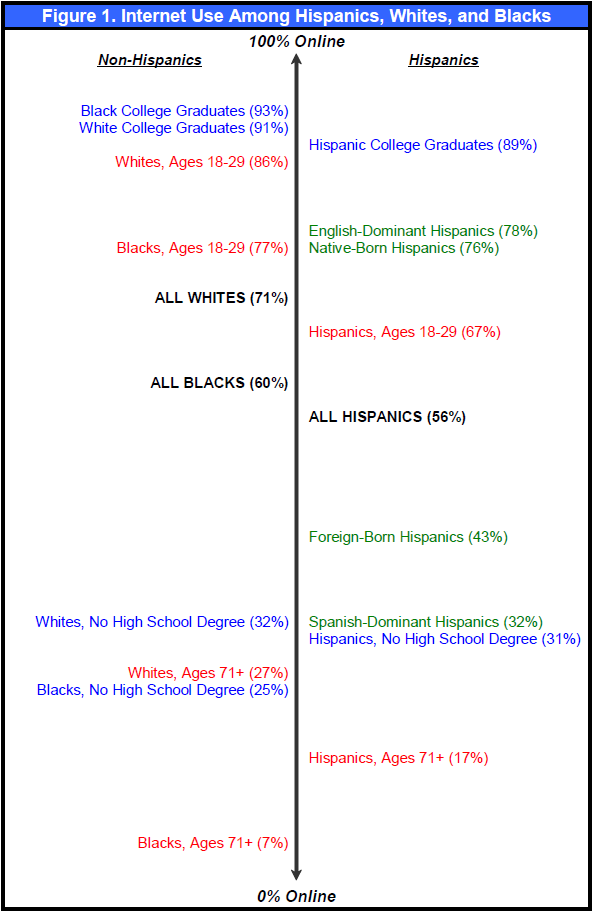 This report is based on the findings of a series of telephone surveys conducted June through October 2006. Data related to Hispanics was gathered through telephone interviews conducted by International Communications Research between June 5 – July 3, 2006, and August 10 – October 4, 2006, among a sample of 6,016 Hispanic adults, aged 18 and older. For results based on the total sample, one can say with 95% confidence that the error attributable to sampling and other random effects is +/-2.07%. Data related to non- Hispanics was gathered through telephone interviews conducted by Princeton Survey Research Associates between August 1-31, 2006, among a sample of 2,928 adults, aged 18 and older.

Next: II. Latinos in the U.S.
← Prev Page
You are reading page1Page2Page3Page4Page5
Next Page →