“I was at a T.J. Maxx with my Colombian friend, and we were talking in Spanish, and this white person said ‘You’re supposed to speak English in America.’ And I said, ‘Oh really? So you need to learn Spanish because this is a changing country. Get over it.’”
—25-year-old Hispanic female

“Sometimes we speak Spanish to hide things from other people that don’t understand the language.”
—16-year-old Hispanic male

In their use of language, Latinos in the United States are following a trajectory well known to immigrant groups around the world and through the ages—from one generation to the next, immigrant families grow more proficient with their new language and less with their old (Hakimzadeh and Cohn, 2007; Pew Hispanic Center, 2004). The 2009 National Survey of Latinos finds that these generational shifts are quite dramatic among Latino youths. For example, among foreign-born 16- to 25-year-olds, 48% can carry on a conversation in English,10 but among their native-born counterparts, the likelihood of speaking proficiently in English more than doubles, to 98% for the second generation and 97% for the third generation.

However, as this march toward English dominance unfolds across generations, young Latinos are not abandoning the Spanish language. About nine-in-ten immigrant youths and eight-in-ten second-generation youths are fluent in Spanish. Even among third-generation youths, nearly four-in-ten (38%) retain the ability to speak and understand Spanish, despite the fact that they were born in the United States to native-born parents who are mostly English dominant. And when it comes to music, some 30% of third-generation Latino youths report that at least half of the songs they listen to are in Spanish.

As these numbers suggest, the boundary between English and Spanish can often be porous for Latinos of all ages and immigrant generations. Indeed, seven-in-ten (70%) Latino youths say that when conversing with family and friends they use a fusion tongue known as “Spanglish” that mixes words from both languages—a practice that exists among the third and higher generations as well. 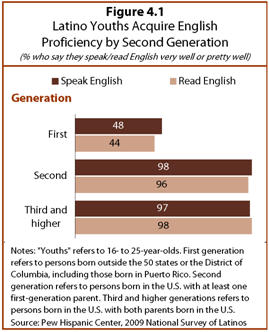 More than three-fourths of all Latino youths ages 16 to 25 can read and speak English with a high degree of proficiency. Some 78% report that they can carry on a conversation in English either very well or pretty well, while 76% say the same about reading a newspaper or book in English. Their rates of proficiency in Spanish are similar. When asked if they can carry on a conversation in Spanish, three-fourths (75%) of respondents report that they can do so either pretty well or very well, and when asked a similar question regarding their ability to read in Spanish, 68% say that they can do so.

There are marked differences in English ability by nativity among Latino youths. English proficiency for immigrants increases the longer they live in the U.S. Just under half (48%) of foreign-born youths report that they are conversant in English. This number drops slightly (44%) when immigrants are asked about their ability to read English-language newspapers or books. By the second generation, however, English proficiency among Latino youths jumps to 98% for speaking and 96% for reading and writing. These high rates of proficiency persist among the third generation, 97% of whom report proficiency in speaking English and 98% of whom report proficiency in reading and writing English. 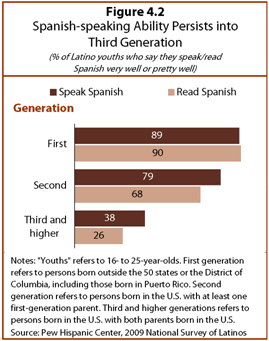 Not surprisingly, nearly all immigrant Latino youth are facile in Spanish. Some 89% report being conversant in the language, and a similar share (90%) report being able to read and write very well or pretty well in Spanish. The number of second-generation Latinos who are fluent in Spanish—79%—does not differ significantly from the share of immigrants who are fluent. While speaking ability is retained in the second generation, the share who can read and write in Spanish drops significantly to 68%. The decline in Spanish reading and writing skills is more dramatic between the second and third generations, with about one-fourth (26%) of the third generation retaining those skills. However, spoken language retention is more resilient, with almost four-in-ten (38%) third-generation youths reporting that they speak Spanish either very well or pretty well.

Spanish speaking and reading proficiency is very similar among Latinos ages 26 and older. Some 80% speak Spanish very well or pretty well, and when it comes to reading and writing in Spanish, 76% report that they can do so very well or pretty well. Older Latinos are less likely to report proficiency in speaking or reading English. Fifty-eight percent report that they are conversant in English, and a similar share say they can write proficiently in English. However, these differences in English ability are driven entirely by the fact that there are more foreign born among older Latinos. If older Latinos had the same nativity profile as Latino youths, their English language ability would be identical.

The Pew Hispanic Center has developed a “primary language” measure that combines all four dimensions of English and Spanish reading and speaking ability. Among youths, more than one-third (36%) are classified as English dominant according to this measure, while 41% are considered bilingual, and the remaining 23% are Spanish dominant. 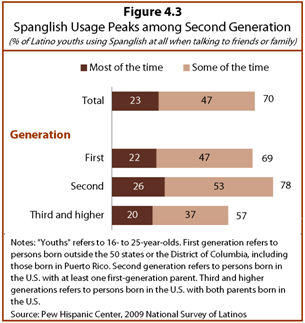 Over time, the bilingual preferences and proficiencies of so many Hispanics have led to the development of “Spanglish,” an informal hybrid of English and Spanish. While being bilingual in Spanish and English implies the ability to read, write and converse in either language, using Spanglish typically implies using Spanish and English words interchangeably within one conversation or piece of writing. Survey respondents were asked how often, if at all, they used Spanglish when speaking with their family or friends. Some 23% of youths report using Spanglish most of the time, and an additional 47% report using it some of the time. 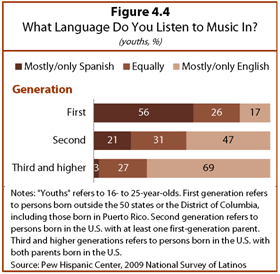 When asked about media usage, about a third of Latino youths state that when they listen to music, they do so only (8%) or mostly (23%) in Spanish. An additional 29% listen equally in Spanish and English, 27% listen mostly in English, and 13% listen only in English. 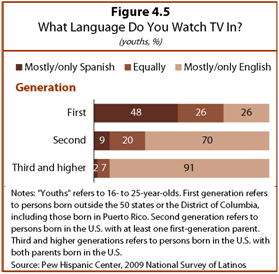 “I’m like half and half, but when I turn on the radio I’m most likely to go to a Spanish station, then I’ll go to an English station.”
—15-year-old Hispanic female

“There’s certain things that I prefer watching in Spanish. Like if there’s a good soccer game on, but it is only available in English, I might not watch it.”
—19-year-old Hispanic male

“[Spanglish]…for example…right now I’d be speaking in English y después empiezo hablar Español. You start the sentence in one language and then all of a sudden switch to another language…with my brothers I speak Spanglish, and we switch back and forth all the time.”
—20-year-old Hispanic female