The concept of assimilation has been debated extensively in the social science of migration since the early 20th Century, but it is now broadly accepted as a way to describe the ways that immigrants and their off spring change as they come in contact with their host society.1 In its current usage the concept of assimilation does not imply any superiority in the host society’s views or a particular value to the changes in attitudes and behavior among immigrants across generation. Rather, assimilation is now most useful as a means for describing a social dynamic that is characteristic of this era in U.S. history.

Immigration has been the largest source of population growth in the Hispanic population since the 1970s. The 2002 National Survey of Latinos permits a comparison of the views and attitudes of immigrants and those of native-born Latinos and non-Latinos. This is one way to assess the pace of the assimilation process by which many newcomers adopt some values, beliefs, and behaviors more similar to U.S. culture than to the culture of the country from which they or their ancestors originate. This is neither a complete nor uniform process as some individuals change more than others and attitudes in some areas are more subject to change than others. Assimilation is similar to the concept of acculturation, which describes the changes in both the newcomers and the hosts when they come into contact with each other. Whereas assimilation describes this process on an individual level and focuses on members of one group adopting the cultural patterns of the majority or host culture, acculturation focuses on the impact that the two cultures have on each other.2

Literature has suggested that, while not perfect, language acquisition—in this case the acquisition of English—is a reasonable proxy to measure acculturation and assimilation.3 Two questions are important to consider: To what extent do differences in language among Latinos mirror differences in attitudes? And, how much does language matter in explaining those differences compared to other factors such as education or country of birth? On both points an analysis of the survey results demonstrates that language plays a central role in the assimilation process.

Language As A Measure

The survey asked an extensive battery of questions on language preferences and abilities. The results showed a range of language use—both speaking and reading—in the adult Hispanic population, with almost half (47%) indicating that they are primarily Spanish speakers, around one quarter (28%) indicating they are bilingual, and one quarter (25%) indicating they are primarily English speakers. While the survey demonstrated that there were some important similarities among Hispanics of all language groups, it also highlighted key differences on important issues. Some of the most interesting variation was found on social issues such as divorce, homosexuality, and abortion, and attitudes toward the family (see Table 1). Other differences worthy of note also exist regarding beliefs about what it takes to be successful in the United States, attitudes toward government, and fatalism. In general, the attitudes and beliefs of English-dominant Hispanics are much more similar to those held by non-Latinos than the attitudes and beliefs of Spanish-dominant Latinos. 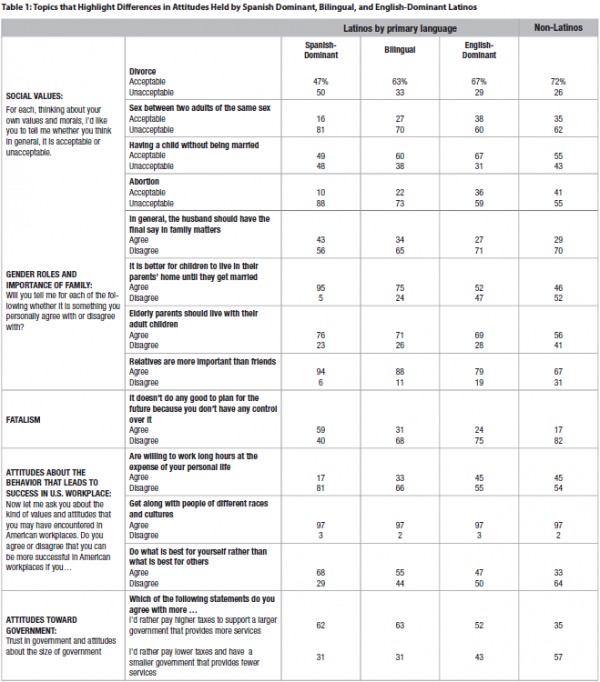 Language Compared To Other Factors

A logistic regression analysis permits an assessment of the importance of language in assimilation by controlling for other factors and statistically isolating the role of language. In effect, the analysis asks, if other factors were equal, would language stand out as a characteristic that correlates to the differences in views described above or are factors like age, education, and generation as important in explaining the differences. The results demonstrate that on almost all key questions related to assimilation, language contributes to differences in attitudes substantially even after controlling for other factors, such as age, gender, level of education, income, place of residence (urban, suburban, rural), country of origin, political party, religion, citizenship, and generation in the United States. For example, based on the results from logistic regression, it is estimated that when all controlled values are set at their mean, 93% of Spanish-dominant Latinos agree that it is better for children to live in their parents’ home until they get married. When these same calculations are done for English-dominant Latinos, fewer, 71%, are estimated to feel the same way. Furthermore, using the same analysis, it is estimated that 51% of Spanish-dominant Latinos find divorce acceptable, but when these same calculations are done for English-dominant Latinos 70% find divorce acceptable. This pattern is also observed for all of the following dependent variables: the acceptability of sex between two adults of the same sex, having a child without being married, and abortion; and agreeing that, in general, the husband should have the final say in family matters and that relatives are more important than friends (see Table 3).

As a result of immigration, the number of Spanish speaking Latinos is greater than those who are currently bilingual and English dominant in the adult Latino population. English, however, is quickly making ground among immigrants, and as shown in Table 2, becomes more dominant than Spanish in the second generation. Across a range of attitudes and beliefs we saw a pattern related to language hold, and language is one of the key forces behind the process of assimilation of Latinos in the United States.

The 2000 National Survey of Latinos also showed that some distinctly Latino attitudes are evident across the Spanish dominant, English dominant and bilingual groups. For example, while some attitudes about family vary by primary language, Latinos of all language preferences still seemed to place more emphasis on family in some cases than non-Hispanic whites. For example, when asked whether they agree that elderly parents should live with their adult children, large majorities of Spanish-dominant (76%), bilingual (71%), and English-dominant (69%) Latinos agreed that they should, in comparison to fewer (53%) non-Hispanic white Americans. This suggests perhaps that assimilation is not necessarily an across-the-board phenomenon, and that perhaps some selective assimilation is taking place.

The sample design employed a highly stratified disproportionate RDD sample of the 48 contiguous states, including oversamples for Salvadorans, Dominicans, Colombians, and Cubans. The results are weighted to represent the actual distribution of adults throughout the United States. The Latino sample in particular was weighted to reflect the actual distribution among Latino adults of country of origin, age, sex, and region.

Of those who were interviewed, 2,929 identified themselves as being of Hispanic or Latin origin or descent (based on the question “Are you, yourself of Hispanic or Latin origin or descent, such as Mexican, Puerto Rican, Cuban, Dominican, Central or South American, Caribbean or some other Latin background?”). Throughout this report, they will be referred to interchangeably as either “Latinos” or “Hispanics.” In addition, interviews were conducted with 1,008 non- Hispanic whites and 171 non-Hispanic African Americans. The margin of sampling error is +/- 2.41 percentage points for Latinos overall. The sample sizes and margins of error for the different language groups are shown in the table below. The report also highlights results for other subgroups of Latinos. Please see the introduction of the report for definitions, sample sizes, and margins of sampling error of these key groups.