Arizona is the first state in the nation to enact a law that penalizes businesses for knowingly hiring unauthorized immigrants. The Legal Arizona Workers Act took effect on Jan. 1, 2008.

In previous research, the Pew Hispanic Center estimated that there were 400,000 to 450,000 unauthorized migrants living in Arizona in 2005. The Center estimates that 65% of this population participates in the labor force,1 suggesting the presence of 260,000 to 292,500 unauthorized workers in Arizona in 2005. Based on these estimates, unauthorized migrants accounted for about 7% to 8% of Arizona’s population and about 10% of its labor force.

This fact sheet presents a demographic profile of Arizona’s Hispanic and foreign-born populations in 2006. It is based on the Pew Hispanic Center’s analysis of the 2006 American Community Survey and the 2000 Decennial Census, both conducted by the U.S. Census Bureau. 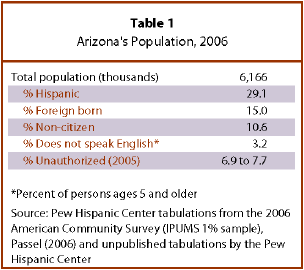 The following sections of this fact sheet highlight key characteristics of Arizona’s population in 2006; changes in Arizona’s population from 2000 to 2006; and the key characteristics of Arizona’s labor force in 2006. Unless otherwise noted, all estimates are derived by the Pew Hispanic Center from the 2006 American Community Survey (ACS) and the 2000 Decennial Census. The tables in this fact sheet highlight key demographic and labor market characteristics of all Arizonans, all foreign-born persons, all Hispanics, native-born Hispanics and foreign-born Hispanics in total and by period of arrival.1 Some estimates for the United States also appear in the text for the sake of contrast with trends in Arizona. An Appendix includes detailed tables that are also the source for many of the estimates discussed below.

A Note on the Data Sources and Estimates

The estimates in this fact sheet are subject to sampling error. Also, estimates in this fact sheet will differ from estimates that may be published by the Census Bureau because of differences between the data used by the Census Bureau and the data it releases for public use. Further information on Census data and on sampling error in the data is available at http://www.census.gov/prod/cen2000/doc/sf3.pdf and http://www.census.gov/acs/www/Downloads/2006/AccuracyPUMS.pdf.

Arizona’s Hispanic and Foreign-Born Populations in 2006 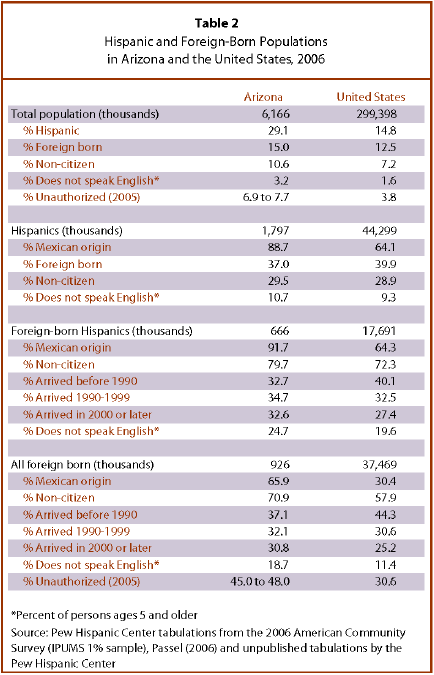 The age distributions of the native-born and foreign-born Hispanic populations are very different from each other and from the overall Arizona population. Native-born Latinos in Arizona are very young—nearly half (47.4%) are less than 16 years old. That compares with just 9.4% of the foreign born Hispanic population and 23.3% of the general population in Arizona. Looking at this another way, there were 1.4 million children younger than 16 in Arizona in 2006. Of that number, 599,000, or 41.7%, were Hispanic, the vast majority native born.

Most foreign-born Hispanics (69.4%) in Arizona are in their prime working years, ages 25 to 64. That compares with 51.4% of Arizona’s total population.

Hispanic heads of households in Arizona are less likely than non-Hispanic household heads to live in owner-occupied homes (56.2% versus 68.3% for all Arizonans). Reflecting general trends in economic assimilation, homeownership among foreign-born Hispanics increases with time in the United States. In particular, the homeownership rate increased from 17.9% among immigrant Latinos who arrived in 2000 or later to 72.0% among those who arrived before 1990. 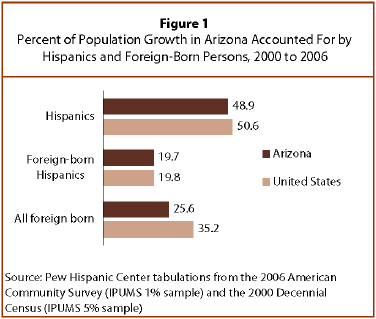 Characteristics of the Labor Force in Arizona, 2006 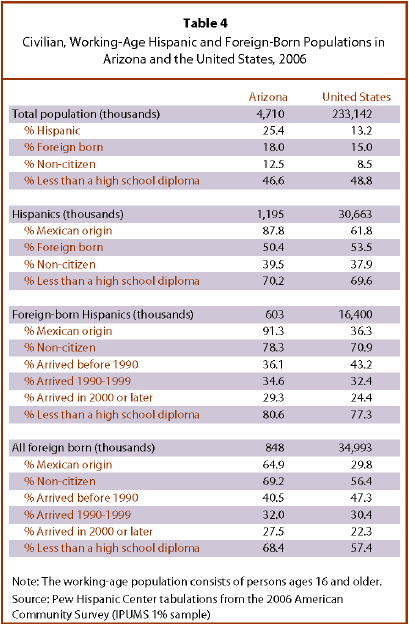 The characteristics of Arizona’s labor force, not surprisingly, resemble the characteristics of its population. Foreign-born workers, especially of Mexican origin, play a larger role in Arizona than in the nation. These workers tend to have lower levels of education and are concentrated in blue-collar industries and occupations, such as construction and building and grounds cleaning and maintenance. 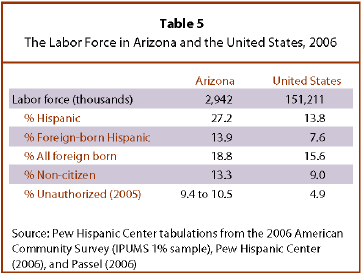 The vast majority of foreign-born Hispanics in the labor force—325,000 of 410,000—are not U.S. citizens. Hispanic non-citizens represent 11.0% of Arizona’s labor force, double the nationwide share of 5.5%. 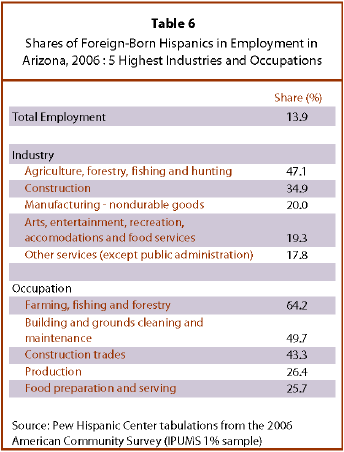 There are five major occupations in Arizona in which foreign-born Hispanics account for at least one-fifth of employment: farming, fishing and forestry (64.2%); building and grounds cleaning and maintenance (49.7%); construction trades (43.3%); production (26.4%); and food preparation and serving (25.7%).

A Note on Labor Force Estimates From the American Community Survey

Labor force estimates in this fact sheet are derived from the ACS and they will differ from the labor force estimates released by the Bureau of Labor Statistics. The BLS estimates are derived from the Current Population Survey (CPS) and the Current Employment Statistics (CES) program that surveys businesses about their payrolls. Estimates released by the BLS are considered more reliable and are the official indicators of employment and unemployment trends. See http://www.census.gov/hhes/www/laborfor/laborfactsheet082504.html and http://www.census.gov/pred/www/rpts/B.7%20Final%20Report.pdf for additional details.

Next: Appendix: Detailed Tables on Arizona’s Population and Labor Force Characteristics, 2000-2006
← Prev Page
You are reading page1Page2
Next Page →