This report was originally published as a chapter in Trends 2005, a Pew Research Center reference book that examines current developments and long term trends on issues such as politics, religion and public life, the media, the internet, the Hispanic people, the states, and national and global public opinion.

The Hispanic1 population of the United States is growing fast and changing fast. The places Latinos live, the jobs they hold, the schooling they complete, the languages they speak, even their attitudes on key political and social issues, are all in flux. They now constitute this country’s largest minority, but they are not an easily identified racial or ethnic group. Rather, they are defined by shared elements of Latin American ancestry and culture. In this chapter, we examine Hispanic demographic trends and labor market and educational outcomes; we also analyze the diverse attitudes, values, beliefs and language patterns of the Latino population.

The 2000 census marked the Hispanic population at 35.3 million people, an increase of 58% over 1990. Since then, growth has continued at a brisk pace. The total Hispanic population in 2004 was 40.4 million. That is a jump of more than 14% in just four years; meanwhile, the non-Hispanic population was up by barely 2%. The impact of Latino population growth is magnified by the fact that the white and African-American populations are not only stable in size but also aging. As the huge baby boom generation moves toward retirement, young Latinos are filling in behind them.

Large-scale immigration from Latin America, especially Mexico, developed in the 1970s, gathered momentum in the 1980s and surged after the mid-1990s. As a result, immigration drove most of the Latino population growth over this period. A substantial share of the growth, particularly in the past decade, has come through illegal immigration. Although there are no exact numbers, demographers who specialize in immigration estimate that the total undocumented population in this country is currently 10 million. Roughly 60% are believed to come from Mexico and another 20% from the rest of Latin America, bringing the Hispanic share of that total to 80%, or 8 million.

Latino immigrants, most of them young adults in their prime child-bearing years, have proved highly fertile, with birth rates twice as high as those of non-Hispanics. Consequently, Latino population growth in the next few decades will be driven primarily by increases in the second generation. These native-born, English-speaking, U.S.-educated Hispanics will have a very different impact on the country than their immigrant parents had. That impact is still to be fully felt, as half of the offspring of Latino immigrants are 11 or younger. Their youth, coupled with the expected increase in their numbers, signals a growing presence of Latinos in the school-age population and in the pool of new entrants to the labor force.

As the Hispanic population grows and shows signs of becoming less immigrant-based, it is also starting to spread out. Although Hispanics are still concentrated geographically in California, Texas and other states that have had large Latino communities for decades, this population has begun to disperse across the country, with very fast growth in states as scattered as Georgia, Nebraska and Washington.

The rapid increase in the Hispanic population has made it the second-largest ethnic or racial group in the labor force behind whites. Latinos now make up 13% of the U.S. labor force, but they are expected to account for about one half of the growth in the labor force between now and 2020. Not surprisingly, Hispanics also account for a disproportionate share of new jobs. Despite their success in finding employment, Latino workers, especially recent immigrants, are less educated and less experienced than other workers. As a result, they are concentrated in relatively low-skill occupations, have a higher unemployment rate and earn less than the average for all workers. Poverty is also high among Latino households and wealth accumulation is low; Hispanic households own less than 10 cents for every dollar in wealth owned by white households. Meanwhile, Latino immigrants retain strong economic ties to their countries of origin and many of them regularly send money home. According to the Inter- American Development Bank, more than $30 billion was remitted to Latin American and Caribbean countries in 2003.

Fast growth in the number of Hispanic children has also led to increases in U.S. school enrollments since 1980. This trend will continue at least through the next two decades. As their numbers have increased, Hispanic youths have been doing better in school: A rising proportion of U.S.-educated Hispanic children finish high school and more are going on to college. Yet even though Latino youths have narrowed some important educational gaps, Latinos continue to lag behind white students at all key milestones of their educational journey. In high school, Hispanic youths complete a less rigorous curriculum and, on average, score lower on national assessments and college entrance examinations. Although college entry has significantly expanded among Hispanic youths, they remain much less likely to finish college than their white peers.

The Hispanic population is not a racial group, nor does it share a common language or culture. The single overarching trait that all Hispanics share in common is a connection by ancestry to Latin America. This population, in fact, traces its origins to many countries with varied cultures, and while some Latinos have family histories in the United States that date back centuries, others are recent arrivals. Some speak only English, others only Spanish, and many are bilingual. Given this diversity, it is not easy to define an identity, belief system and set of values that all Hispanics share. Moreover, this is a population that is changing the way it thinks. Immigrants are a people in motion who are learning about a new land — even as their children are drawing from both their parents’ culture and powerful American influences to shape their attitudes. Research shows that the process of change is widespread and powerful, and that language plays a central role. Latinos who speak only Spanish, almost all of them immigrants, share a set of views on a variety of issues that distinguish them from native-born Americans. Meanwhile, those who speak English express attitudes more similar to those of the U.S. population in general. The evidence shows that English, and the views that come with it, gains ground in the first generation — among the foreign-born — and becomes dominant among their children in the second generation. 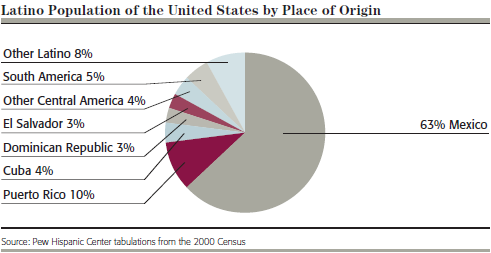 Next: II. Demographics
← Prev Page
You are reading page1Page2Page3Page4Page5
Next Page →