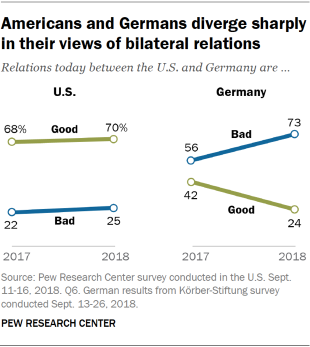 Americans and Germans have vastly different opinions of their bilateral relationship, but they tend to agree on issues such as cooperation with other European allies and support for NATO, according to the results of parallel surveys conducted in the United States by Pew Research Center and in Germany by Körber-Stiftung in the fall of 2018.

Americans, for their part, are politically divided over tariffs on Germany (while Germans overwhelmingly support retaliatory tariffs), and few Americans see Germany as the most or second-most important foreign policy partner. About a third of Germans still rank the U.S. as one of their most important partners (35%), second only to France (61%).

Despite the differences of opinion on the overall relationship, Americans and Germans have remarkably similar views when it comes to attitudes toward Russia and China, as well as opinions about the economy.

Both Germans and Americans still think highly of NATO, and Germans have become more inclined to believe their country must increase spending on defense. Americans and Germans also want to cooperate more with France, the United Kingdom and China.

Americans and Germans share similar opinions on economic issues. People in both countries say that trade with other countries is good, but there is less agreement on the specific benefits of trade. And there is an overarching pessimism in each country about the economic future for children and the financial progress of average citizens over the last 20 years. 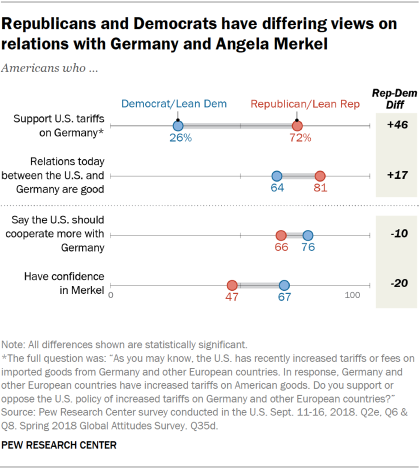 There is a distinct partisan divide in the U.S. on many aspects of the American-German relationship. For example, Republicans and Republican-leaning independents are 46 percentage points more likely than Democrats and Democratic-leaning independents to support the U.S. policy of tariffs on imported goods from Germany and other European countries. Republicans are also more likely to characterize America’s relationship with Germany as good. Democrats, on the other hand, are more likely than Republicans to say the U.S. should cooperate more with Germany and more readily name Germany as a top foreign policy partner.

On confidence in German Chancellor Angela Merkel, there is a 20-percentage-point partisan gap, with Democrats expressing more confidence in the German leader. 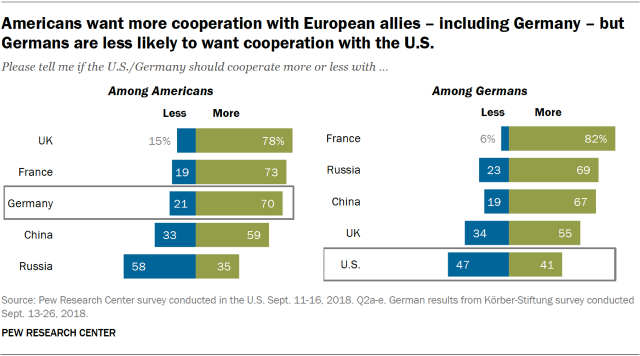 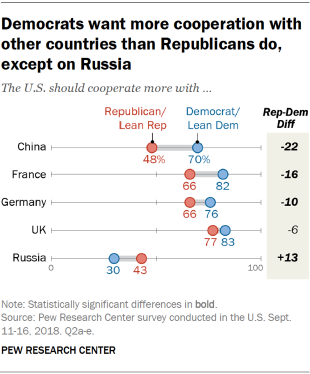 Who do Americans and Germans see as their top foreign policy partners? 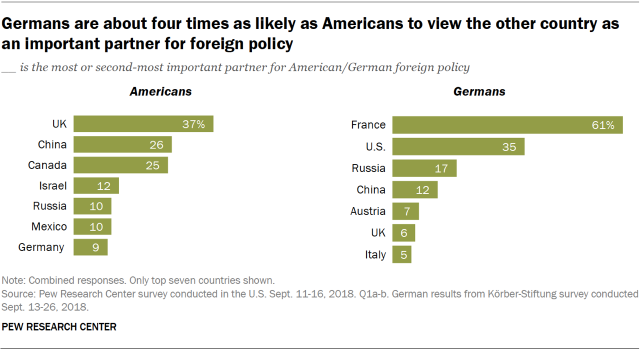 There is a partisan gap regarding countries Americans see as important foreign policy partners, with Democrats more likely than Republicans to name Germany as one of the two most important partners for the U.S.

And while the UK and China rank in the top three positions across party lines, more Republicans (25%) than Democrats (5%) name Israel as a top foreign policy partner for the U.S. There are also significant partisan differences in opinion on views about Canada and Mexico. 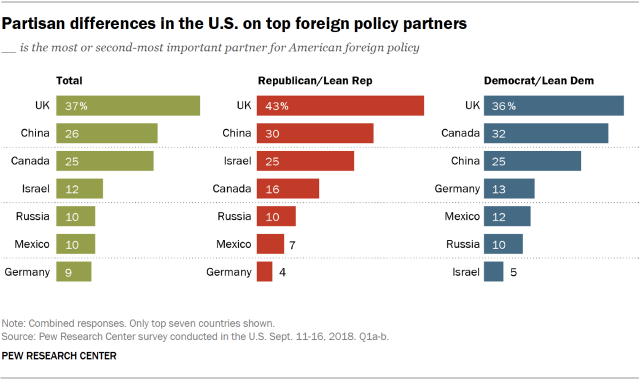 About six-in-ten Germans name France as one of their country’s top two foreign policy partners, while roughly one-third name the U.S. These results are consistent across a range of political parties: Supporters of the CDU/CSU, their coalition partner the SPD, the Left Party and the Greens all rank France and the U.S. as Germany’s most important foreign policy allies.

Russia and China rank third and fourth, respectively, as the most important foreign policy partner across selected political parties except for the Greens, where these countries’ rankings are reversed. 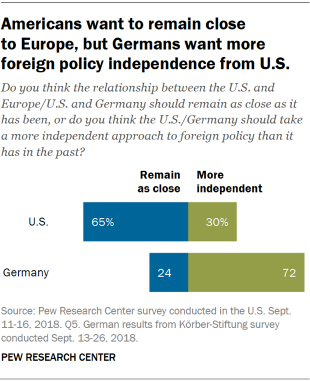 When asked about the future of U.S.-European relations, nearly two-thirds of Americans say they would like relations to remain as close as they have been (65%), while 30% think the U.S. should take a more independent approach to foreign policy. However, when Germans were asked specifically about U.S.-German relations, roughly seven-in-ten (72%) said they would like their country to pursue a more independent approach.

Democrats (77%) are more likely than Republicans (51%) to say the U.S. should remain as close as it has been with Europe on foreign policy. 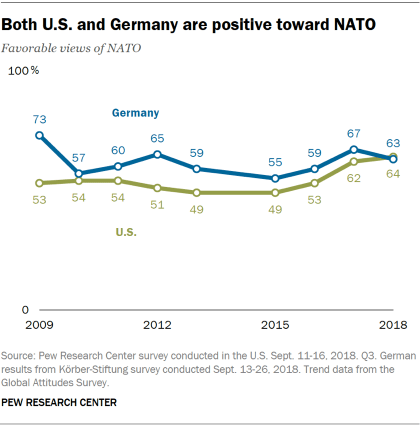 Despite their differences, Americans and Germans are both favorable toward the North Atlantic Treaty Organization (NATO). This convergence follows findings from Pew Research Center and Körber-Stiftung in 2017 in which roughly half of Americans said NATO was doing too little to help solve global problems, while about the same proportion of Germans said the organization was doing the right amount. NATO favorability continues to remain high in both countries even after U.S. President Donald Trump and Chancellor Merkel publicly clashed over defense spending and Russian influence at the NATO summit in Brussels in July 2018.

The two publics have moved in opposite directions regarding defense spending, which has been a contentious issue in relations between the U.S. and its NATO allies. The share of Americans who say their European allies should increase their defense spending dropped by 6 percentage points between 2017 and 2018, while the share saying European allies should keep their spending about the same rose 9 points. Germans, on the other hand, saw an 11-point increase in the share saying they wanted their own country to spend more on national defense. 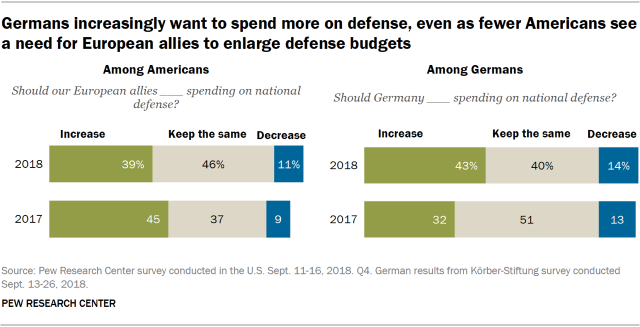 In the U.S., Republicans (59%) are more likely than Democrats (27%) to say European allies should increase spending on national defense. American men (46%) are more supportive of increased spending than women (32%) are.

In terms of political affiliation, 40% and 44% of the CDU/CSU and SPD coalition partners, respectively, want increased spending, compared with 28% of Left Party backers and 29% of Greens supporters. In Germany, 47% of men say the country should spend more on national defense, while 39% of women agree.

German and American views of the world 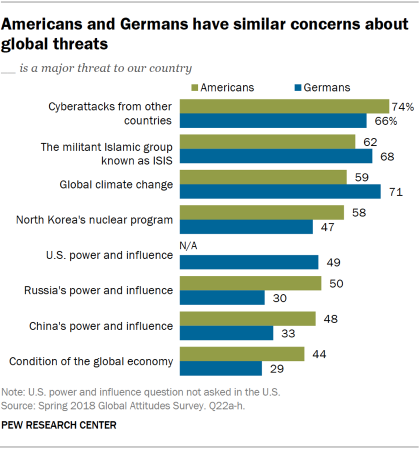 When asked about the top international threats facing their countries, majorities of Americans and Germans say cyberattacks from other countries, the Islamic militant group known as ISIS and global climate change are major concerns.

Americans are slightly more concerned about cyberattacks (74% major threat) than are Germans (66%), and Germans are more likely to consider climate change as a major concern (71%) compared with Americans (59%). Americans also are generally more concerned about North Korea’s weapons program, the power and influence of Russia and China and the condition of the global economy. (For more information on global views about cybersecurity, including among Americans and Germans, see the Center’s report “International Publics Brace for Cyberattacks on Elections, Infrastructure, National Security.”)

Roughly one-in-three Germans (35%) have a positive view of Russia, compared with only about one-in-five Americans. Ratings for Russia in both the U.S. and Germany have fallen sharply since 2011, when massive protests swept across Russia after accusations of ballot-rigging in the December parliamentary elections. They reached a low point in 2014 after the annexation of Crimea (19% favorable in both countries). 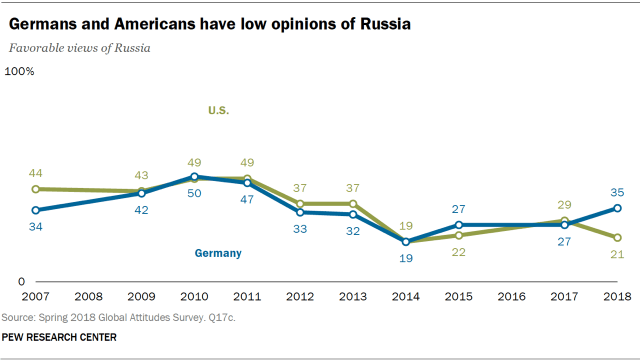 While opinion of Russia is low in both countries, Republicans in the U.S. are somewhat more favorable toward the country than are Democrats (27% favorable vs. 16%). And supporters of Alternative for Germany (AfD) are much more likely to see Russia favorably (50%) than are those with an unfavorable view of the right-wing party (31%). And Germans living in the East are 16 percentage points more favorable toward Russia than those living in the West (48% vs. 32%).

Germany and the U.S. also have similar attitudes toward China. Roughly four-in-ten in each country have a favorable view of the Asian economic giant. Over the past decade and a half, Americans’ opinions of China have generally been more favorable than Germans’ views, but a rise in German sentiment over the past few years and a decline in American opinions have pulled attitudes closer together.

As with views of Russia, German views of China differ by region. About half of those in the East have a favorable view toward China (49%), while only 39% of those in the West have a positive opinion of Germany’s largest importer. 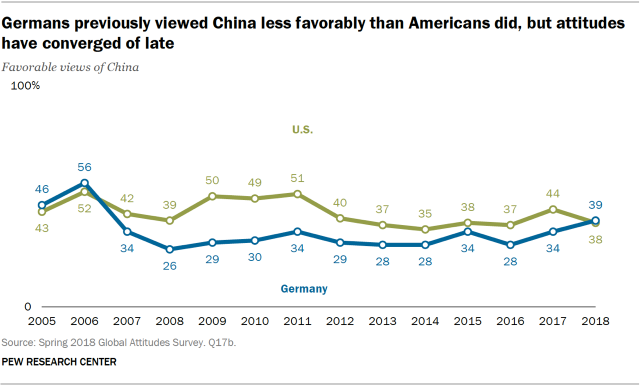 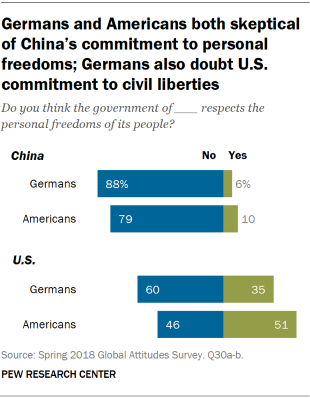 Germans and Americans are also skeptical of China’s human rights record. Overwhelming majorities in each country say the Chinese government does not respect the personal freedoms of its people. This has been true for many years. 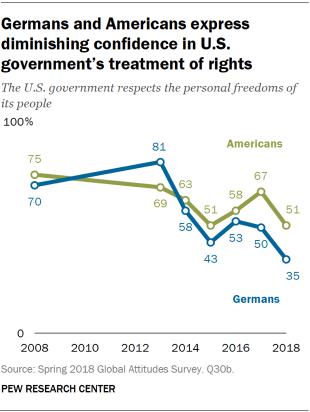 However, since 2013, there has been a steady decline in both Germany and America in the percentage of those saying the U.S. government respects the personal freedoms of its people. In that year, 81% of Germans and 69% of Americans said the U.S. government respected the personal freedoms of its people. But after multiple scandals involving the exposure of National Security Agency eavesdropping, confidence in American respect for civil liberties began to decline. Now, just 35% of Germans and 51% of Americans hold this view. 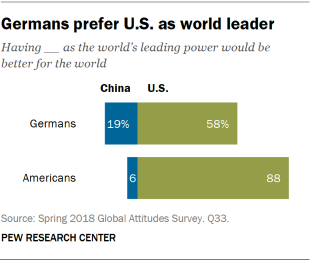 Despite their mixed feelings toward American power, Germans clearly prefer the U.S. as the world’s leading power over China. Nearly six-in-ten Germans say having the U.S. as the top global power would be better for the world, with only 19% saying this about China. However, 17% in Germany volunteer “neither” when asked the question. 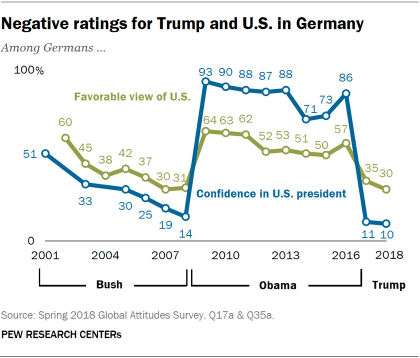 America’s current image in Germany is generally poor, but that has not always been the case. As recently as 2016, 86% of Germans had confidence in then-President Barack Obama and 57% had a favorable view of the United States.

With the election of Donald Trump, positive views of the U.S. and confidence in the U.S. president plummeted. As of 2018, only one-in-ten Germans had confidence in Trump and three-in-ten held a favorable view of the U.S., levels of antipathy not seen since the end of the George W. Bush administration.

Supporters of the right-leaning anti-immigration party AfD are more favorable toward the U.S. than those who do not support AfD (43% vs. 26%, respectively), and they are also more likely to express confidence in President Trump. People who look favorably on other German parties tested are more in line with the general population on U.S. image and confidence in Trump.

While there is no corollary question asked in the U.S. about favorable views of Germany, on a 0-100 feeling thermometer, where 100 is “warmest,” Germany gets a mean rating of 59 from the American public, higher than Mexico and India (51) but lower than Japan (61), the UK (66) and Canada (71). And a majority of Americans (55%) have confidence in Chancellor Merkel to do the right thing regarding world affairs.

American and German views on the economy, trade and migration 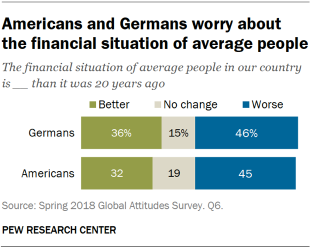 Despite their differences, Americans and Germans have remarkably similar views on the fundamentals of the economy and the overall benefits of trade. There are differences, however, over tariffs and migration.

In the U.S., 48% of Republicans and Republican-leaning independents say the finances of average people are better, compared with only 22% of Democrats and Democratic leaners. Germans who back the AfD are much more likely than those who do not support the party to say that people are worse off compared with 20 years ago (64% vs. 42%). 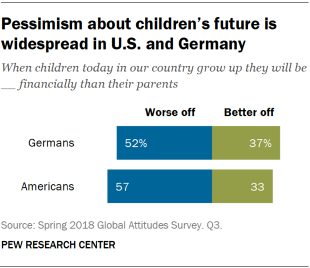 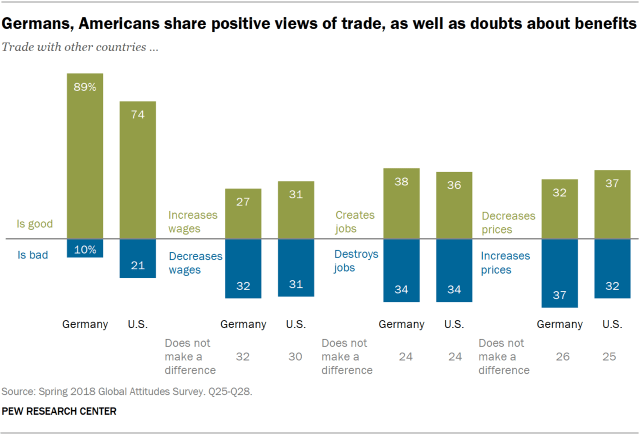 But on the specific benefits of trade, Germans and Americans are less convinced. For example, only about three-in-ten Germans and Americans say that trade increases wages. Just under four-in-ten in each country say trade with other countries creates jobs. And 32% in Germany and 37% in the U.S. say trade decreases prices, which is supposed to be one of the primary benefits of international trade. 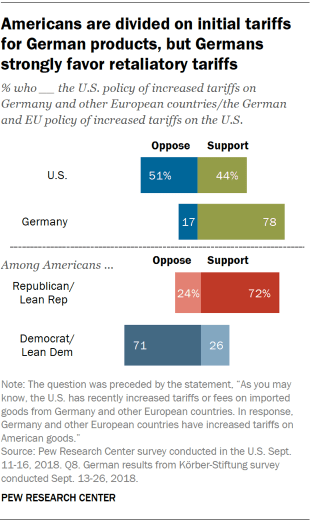 In May 2018, the Trump administration’s tariffs on European steel and aluminum went into effect. In response, Germany and its European Union allies placed tariffs on American goods, ranging from bourbon to motorcycles.

Among Americans, there are sharp divisions on this policy. About half (51%) oppose the initial tariffs, while 44% support the measures. But almost three-quarters of Republicans (72%) support Trump’s EU tariffs while about seven-in-ten Democrats (71%) oppose them.

In Germany, about eight-in-ten (78%) support the retaliatory tariffs. There are minimal differences by party in Germany on this question, as most agree with the policy across the political spectrum. 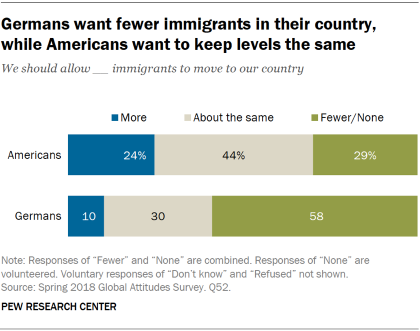 However, Germans are much more opposed to more immigration (making them more aligned with other nations asked about this issue), with a 58% majority saying that they want fewer or no immigrants in their country. Only one-in-ten want more immigrants.

Finally, when it comes to emigration, Germans and Americans are generally not worried about it as an issue (33% and 38%, respectively, say people leaving their country for jobs in other countries is a problem).