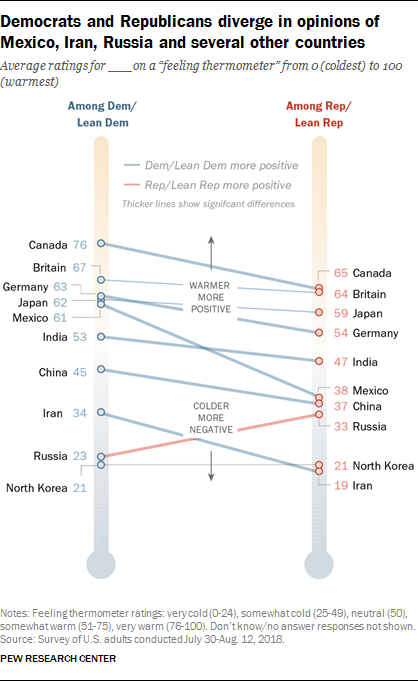 Republicans and Democrats express overwhelmingly negative views of North Korea, but they diverge in opinions of several other countries – including Mexico, Iran, Russia and several U.S. allies.

The new national survey by Pew Research Center, conducted July 30 to Aug. 12 among 4,581 adults, asks respondents for their feelings toward 10 foreign countries on a feeling thermometer ranging from 0 to 100. A rating of 51 or higher is “warm”; a rating below 50 is “cold”; a rating of 50 is neutral.

Democrats and Democratic-leaning independents give Canada an average rating of 76 on the 0-to-100 scale, highest among the 10 countries. On average, Republicans and Republican leaners rate Canada at 65, about the same rating they give to Britain (64). (For more on the public’s views of Canada and Mexico, see “Americans have mixed feelings toward Mexico, ‘warmer’ feelings toward Canada.”)

Republicans give four countries average ratings of 51 or higher: Canada (65), Britain (64), Japan (59) and Germany (54). Democrats give positive average ratings to six countries, including Mexico and India.

The widest partisan differences are in opinions about Mexico. The average thermometer rating for Mexico is 61 among Democrats and just 38 among Republicans.

In opinions about North Korea, however, the two parties are in sync. Republicans, on average, give North Korea a rating of 21; the average rating for North Korea among Democrats also is 21.

‘Cold feelings’ toward Russia increase among members of both parties 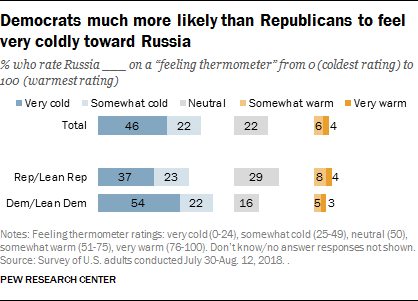 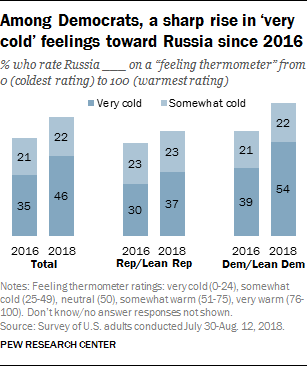 Among members of both parties, especially Democrats, very cold feelings toward Russia have increased since 2016. Currently, more than half of Democrats (54%) give Russia very cold ratings, up 15 percentage points compared with two years ago. More Republicans also feel very coldly toward Russia but the change has been more modest (37% now, 30% then).

Republicans are colder than Democrats toward China, India

Republicans are more likely than Democrats to express cold feelings toward China and India. And while overall partisan views of Japan do not differ significantly, more Democrats than Republicans feel very warmly toward Japan. 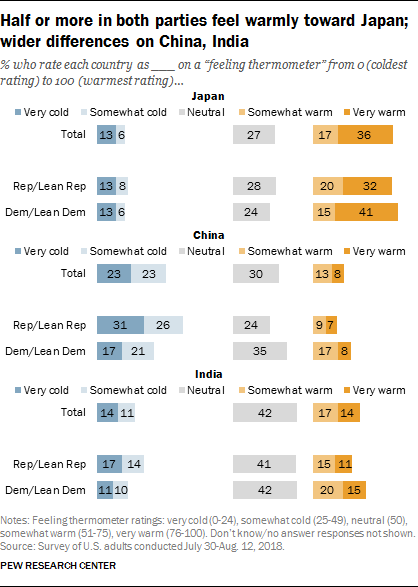 While comparable shares in both parties have neutral feelings about India (42% of Democrats, 41% of Republicans), more Republicans feel coldly toward India (31% vs. 21% of Democrats).

In both parties, half or more express warm feelings toward Japan. Democrats are 9 percentage points more likely than Republicans to feel very warm (41% vs. 32%). 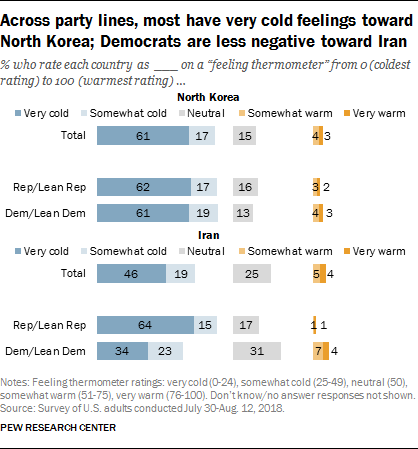 On Iran, by contrast, there are major differences. While majorities in both parties have cold feelings, these views are much more widespread – and more intensely negative – among Republicans. A 64% majority of Republicans have very cold feelings toward Iran, compared with only 34% of Democrats. 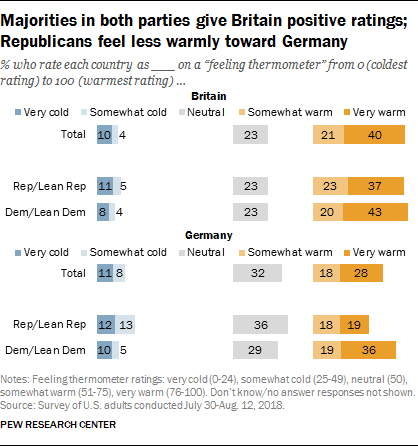 Republicans and Democrats are in general agreement on their feelings about Britain. Majorities in both parties (63% of Democrats and 59% of Republicans) feel warmly toward Britain, with about four-in-ten in both saying they feel very warmly.

There are larger partisan differences in views of Germany. (For more on how Americans and Germans view relations between the two countries, see “Americans Say U.S.-German Relations Are in Good Shape, but Germans Disagree.”)