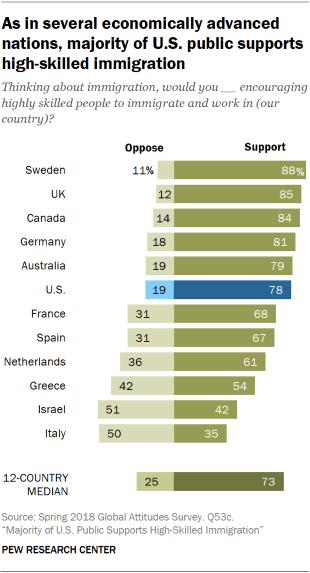 Like publics in other economically advanced countries with a high number and share of immigrants, a majority of Americans support encouraging the immigration of high-skilled people into the United States, according to a new survey of 12 countries by Pew Research Center in spring 2018.1

Roughly eight-in-ten U.S. adults (78%) support encouraging highly skilled people to immigrate and work in the U.S., a percentage that roughly matches or is exceeded by Sweden, the United Kingdom, Canada, Germany and Australia. 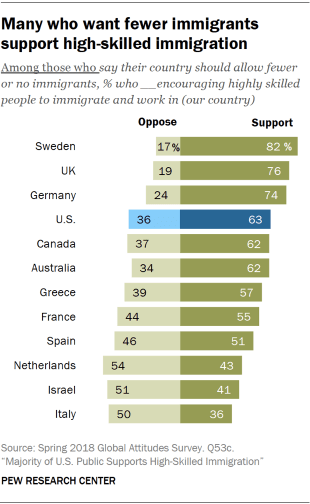 Across the 12 countries, younger adults, more highly educated adults and adults with higher incomes tend to be more supportive of encouraging highly skilled people to immigrate to their countries – findings that are generally in line with other surveys on attitudes toward immigrants and immigration. (See Appendix B for demographic breakdowns.)

The Pew Research Center survey also reveals that even among people who would like to see overall immigration reduced, half or more in all but the Netherlands, Israel and Italy support encouraging high-skilled immigration.

More than a third of U.S. immigrants are highly educated, ranking the country in middle of similar advanced economies with high immigration 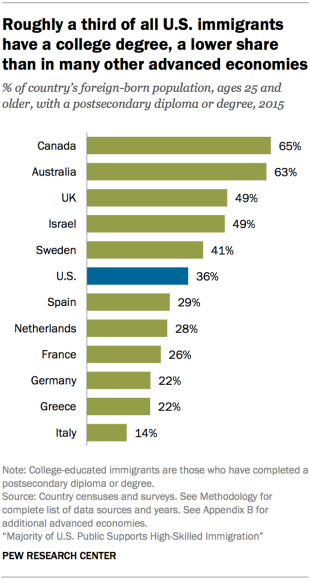 Among surveyed countries, in only two – Canada and Australia – do highly educated immigrants make up the majority of the foreign-born population, based on analysis of 2015 government censuses and labor force surveys.2

In the U.S., just over a third (36%) of immigrants ages 25 and older are college educated, ahead of Spain, Netherlands, France, Germany, Greece and Italy among the 12 countries, but behind the UK, Israel and Sweden.

Moving beyond surveyed countries, the share of the U.S. immigrant population with a college degree still ranks among the middle of 20 economically advanced countries that have 500,000 or more immigrants and populations that are about 10% or more foreign born (see Appendix B for more educational data by country). 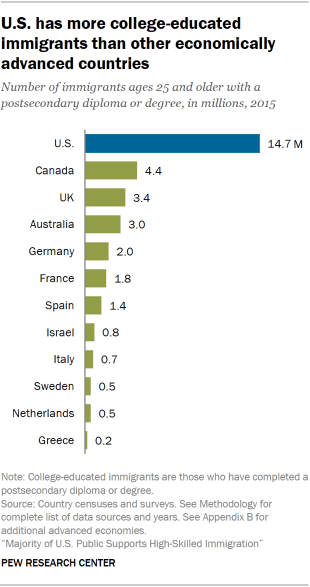 Despite trailing some other economically advanced countries, the U.S. immigrant population is better educated than ever, due in part to increased schooling in origin countries and a boost in high-skilled workers arriving from Asia and Africa.

How highly educated immigrants enter and stay in the U.S.

There were nearly 1.5 million foreign graduates of U.S. colleges and universities who obtained authorization to remain and work in the U.S. through the Optional Practical Training between 2004 and 2016. The OPT program was developed to allow foreign students studying in the U.S. under student, or F-1, visas to gain practical work experience after graduating from a U.S. college or university. There are no limits on the number of foreign student graduates that can participate in the program. OPT participants can work between 12 and 36 months after graduation, depending on whether they have a STEM (science, technology, engineering or math) degree.

Between 2004 and 2016, there were about 1.5 million initial approvals in the H-1B visa program, the primary way that companies in the U.S. hire highly educated foreign workers, with most entering the U.S. from abroad. These are temporary visas that are awarded to employers on a first-come, first-served basis, with applications accepted each year beginning in April. H-1B visas are issued for up to six years and are renewable if the H-1B visa holder has a pending permanent residency (green card) application filed.

The U.S. government granted more than 14 million green cards from fiscal years 2004 to 2016 for lawful permanent residence based on a complex system of admission categories and numerical quotas. The majority (66% in fiscal 2017) went to immigrants who are sponsored by family members – either immediate family or other relatives of U.S. citizens – and a further 13% went to refugees or asylum seekers. There is no educational requirement for people applying as a family member of a U.S. citizen or coming into the country as a refugee or asylum seeker. Employment-related categories (including those with employment-based green cards, workers’ family members and those previously sponsored under the H-1B visa program) accounted for 12% of 2017 issued green cards. There is a limit on the number of family-sponsored and employment-based green cards that can be issued to immigrants from any one country in a fiscal year (currently set at no more than 7%). This has contributed to long wait times for certain nationalities, such as Indians or Mexicans, with these potential immigrants waiting for up to 10 years or more for their green cards, depending on the admission category.

Decades-long government policies have influenced the educational profiles of immigrants 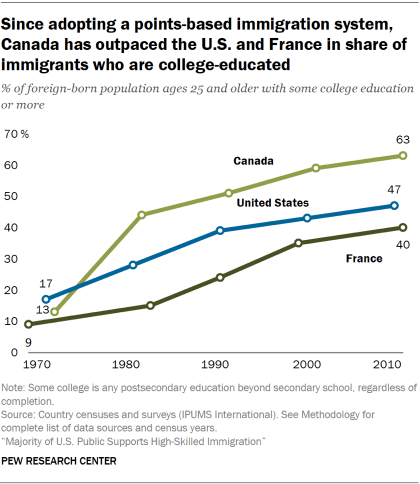 Migration policies, along with factors such as geographic proximity and education levels of source countries, often shape the educational profile of foreign-born populations.

In Canada, for example, immigration rules changed to a largely points-based system with the 1967 Immigration Act, favoring immigrants with more education in conjunction with other characteristics like age and language ability. After more than a decade under the act, the share of immigrants having some college education or more rose from 13% in 1971 to 44% in 1981. After more than four decades using an immigration system based more on merit, nearly two-thirds (63%) of immigrants in Canada ages 25 and older had some postsecondary education.

By contrast, several European countries such as France pursued immigration policies decades ago that were not entirely dependent on educational criteria, but meant to attract migrant workers. Most migrants to France in the 1960s and 1970s arrived as “temporary” migrants, often as laborers. Many remained and were later joined by family members. The share of immigrants in France with some college education has risen from about 9% in the early 1970s to 40% after 2010. This increase has not been as rapid nor risen as high as in Canada.

The U.S. approach differs from other immigration systems. Most lawful permanent residents enter as family members and largely have no educational requirements for entry into the U.S.3 Also, about a quarter, or 10.7 million, of the United States’ immigrant population is unauthorized, and these immigrants are generally less educated than those in the country legally.

But education is a factor for the entry of some groups arriving temporarily. For example, the U.S. offers a limited number of temporary employment-based programs for high-skilled workers. And the U.S. has a tradition of admitting a high number of international students, some of whom can remain in the country temporarily as workers until they apply for permanent residency or return to their home country.

Educational attainment of U.S. immigrants is rising (17% with some college in 1970, 47% in 2010). This trend may continue. The Trump administration, along with some Republican members of Congress, have called for new immigration laws that favor more highly educated migrants through a more merit-based program.

The U.S. is not alone in encouraging immigration by those who are highly educated and highly skilled. Countries in the European Union, for instance, have been actively promoting the Blue Card program, which encourages highly educated and skilled immigrants to come to the EU. 4 And Australia continues to operate its points-based systems.

Unlike in many other countries, immigrants in the U.S. on average have less education than the native-born population 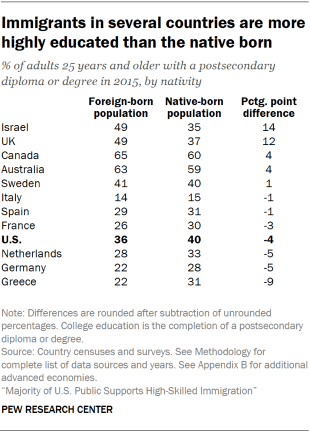 Meanwhile, in the U.S., 40% in the native-born population have a postsecondary diploma, a higher share than among U.S. immigrants. In some European countries, the gap between the share of immigrants and native born with a college education mirrors that in the United States. In France, the Netherlands, Germany and Greece, native-born populations are more highly educated than their respective immigrant populations.

Immigrants are foreign-born individuals, regardless of citizenship. The terms immigrants and migrants are used interchangeably throughout this report. References to immigrants are to the total immigrant population living in a country, sometimes also described as the “migrant stock.” U.S. citizens born abroad, including those born in Puerto Rico or other U.S. territories, are classified as foreign born in this report, even though all three groups are U.S. citizens at birth. As another example, British, Dutch and French citizens born in territories outside of the UK, the Netherlands and France are considered foreign born.

The terms college educated and highly educated refer to those with a postsecondary education diploma or a degree beyond the completion of secondary school or the equivalent of a high school diploma, which is level 4 and higher according to the International Standard Classification of Education (ISCED) 2011. Data presented in this report are for those ages 25 years and older unless otherwise noted. The two terms are used interchangeably in this report.

Economically advanced countries, as defined by the International Monetary Fund (IMF), have high per capita incomes and a diverse set of exports, and they are integrated into the global financial system. They include several countries in Europe, North America, and Asia and Oceania. Although several Persian Gulf countries, such as Saudi Arabia, have high per capita incomes, oil is such a large component of their exports that the IMF does not classify them as advanced economies.

Majority of U.S. Public Supports High-Skilled Immigration
More than a third of U.S. immigrants are highly educated, ranking the country in middle of similar advanced economies with high immigrationDecades-long government policies have influenced the educational profiles of immigrantsUnlike in many other countries, immigrants in the U.S. on average have less education than the native-born population
Acknowledgements Survey methodology Educational attainment methodology Appendix A: References Appendix B: Detailed demographic tables

Where do foreign student graduates work in the United States?

Number of Foreign College Students Staying and Working in U.S. After Graduation Surges