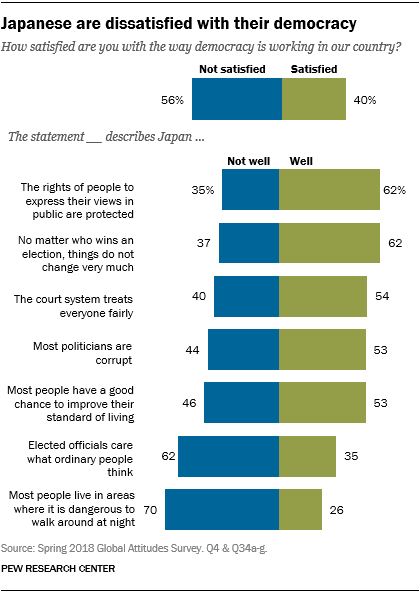 In the past decade and a half, while satisfaction with the economy has increased, public approval of Japanese democracy has declined, with many Japanese of the opinion that it is characterized by corruption and inattentiveness and that elections are ineffective.

Four-in-ten Japanese are satisfied with the way democracy is working in their country. Such sentiment is down 10 percentage points since 2017. Men (47%) are significantly more satisfied than women (34%). Not surprisingly, those who have a favorable view of the ruling Liberal Democratic Party (63%) are pleased with the current state of Japanese democracy. Those who view the Komeito party favorably (57%) are also quite content. But only 48% of Party of Hope backers, 42% of Democratic Party adherents and 28% of CDP supporters give Japanese democracy a positive rating.

When it comes to specific aspects of their country’s governance, Japanese are disparaging of many ways in which their democracy works, yet they are fairly positive about the society they live in.

But the public also credits Japanese governance with producing a free, just and safe society. Seven-in-ten believe most people live in safe neighborhoods. About six-in-ten (62%) think freedom of speech – the right of people to express their views in public – is protected. More than half (54%) believe that the Japanese court system treats everyone fairly. And roughly half (53%) say most people have a good chance to improve their standard of living in Japan.

Men (66%) are more likely than women (57%) to believe that there is freedom of speech in Japan. There is also a gender gap on the question of whether Japanese society affords people the opportunity to improve their standard of living: 58% of men hold that view, compared with 48% of women.

Next: 3. Perceptions of immigrants, immigration and emigration
← Prev Page
Page1Page2You are reading page3Page4Page5Page6Page7Page8Page9
Next Page →

Despite Rising Economic Confidence, Japanese See Best Days Behind Them and Say Children Face a Bleak Future 1. Sentiment about the state of the economy, trade and prospects for the future
2. Views of Japanese democracy
3. Perceptions of immigrants, immigration and emigration 4. Countries’ views of Japan, Abe; Japanese views of China 5. Views of the U.S. and President Trump Acknowledgments Methodology Appendix: Demographic tables