With a population that is both aging and shrinking, Japan’s economic prospects depend heavily on its demographic future. The nation’s population of roughly 127 million is expected to contract by about 30% by 2065, when 38% of Japanese will be ages 65 and older. With the average Japanese woman having fewer than two babies, thus ensuring that the next generation of native-born Japanese will be smaller than the current generation, migration is an important demographic issue.

Notably, the Japanese public is more concerned about emigration – how many people choose to leave Japan – than immigration, or how many enter the country.

Older Japanese, those ages 50 and older, are more likely to say emigration for work is a problem (64%) though half of younger Japanese (18- to 29-year-olds) share this sentiment.

In 2015 the number of migrants in Japan totaled just over 2 million people, or less than 2% of the population. At the same time, 1.3 million Japanese nationals are currently living abroad, according to the government’s statistical bureau. Both immigration and emigration are on the rise, with immigration growing faster. But the net addition to the Japanese population is less than 1% in recent years.

While the public tends to view emigration as a problem, most are comfortable with recent immigration trends. When asked whether Japan should accept more, fewer or about the same number of immigrants, only 23% believe the Japanese government should allow more immigrants to move to their country. A majority (58%) voices the opinion that immigration numbers should stay about the same as they are now, while 13% think fewer immigrants should be allowed to move to their country.

These opinions hold true regardless of age or gender; Japanese with higher incomes are more in favor of increasing immigration than those with lower incomes, though majorities of both groups want about the same number of immigrants to be allowed into Japan.

Most Japanese believe immigrants want to assimilate, but opinions are more mixed when it comes to immigration’s effects on society. 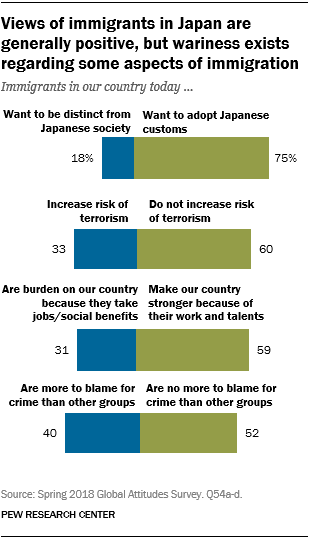 Three-quarters of the Japanese public believes immigrants currently in their country want to adopt Japanese customs rather than remain distinct from the rest of society. A majority also believes that immigrants make Japan stronger through hard work and the talents they possess. Only about a third see immigrants as a burden who take jobs or rely on social benefits.

When asked if immigrants’ presence in Japan affects the risk of future terrorist attacks, six-in-ten Japanese say they believe immigrants do not increase this threat. However, a third of the public (33%) does think more immigration increases the risk of terrorism in Japan. Younger Japanese (43%) are more likely than those ages 50 and older (28%) to say immigrants increase the chances of terror incidents occurring in their country.

Regarding crime, about half (52%) say immigrants are no more to blame for crime than other groups in Japan. But four-in-ten claim that migrants are indeed more at fault for lawbreaking throughout Japan.

Despite Rising Economic Confidence, Japanese See Best Days Behind Them and Say Children Face a Bleak Future 1. Sentiment about the state of the economy, trade and prospects for the future 2. Views of Japanese democracy
3. Perceptions of immigrants, immigration and emigration
4. Countries’ views of Japan, Abe; Japanese views of China 5. Views of the U.S. and President Trump Acknowledgments Methodology Appendix: Demographic tables