Between 2005 and 2015, the number of displaced migrants3 in the Middle East grew fourfold, from about 5 million to about 23 million. Much of this rise was the result of recent conflict in three countries – Syria, Iraq and Yemen. 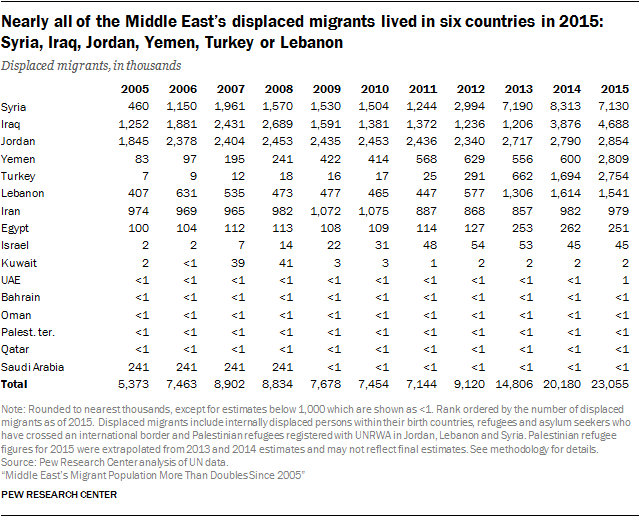 In 2015, Syria had by far the largest number (7.1 million) of displaced migrants living within its borders. Nearly all of them (92%) have been internally displaced by the country’s ongoing civil war. Iraq had the second largest displaced population in the Middle East, at 4.7 million. Like Syria’s situation, most (94%) are internally displaced Iraqis.

Absolute numbers tell only part of the story of the Middle East’s displaced population. As a share of the total population, displaced persons constitute a substantial minority in Jordan (38%), Syria (39%) and Lebanon (26%).

In 2015, Syria’s displaced population was almost entirely made up of internally displaced Syrians. Between 2006 and 2011, by contrast, Iraqi refugees were the largest displaced group within Syria. Yet even at the height of sectarian violence in Iraq in 2007, displaced migrants made up only 10% of Syria’s population. (Since the Syrian conflict began in 2011, fewer Iraqi refugees now live in Syria.) 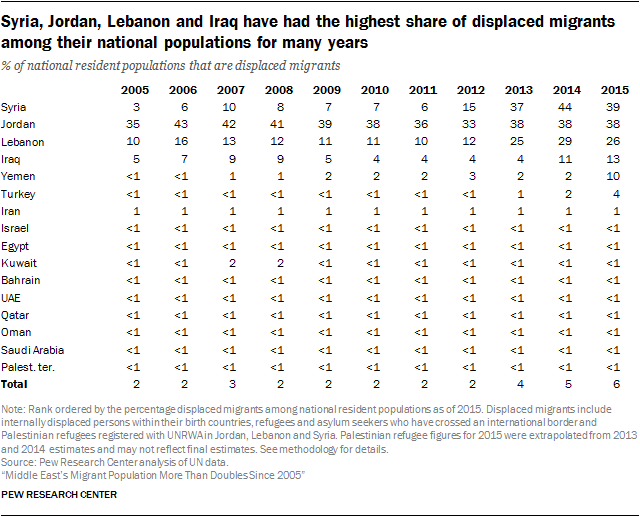 Migrants displaced within their home countries: Rapid rise in Syria, Iraq and Yemen in recent years 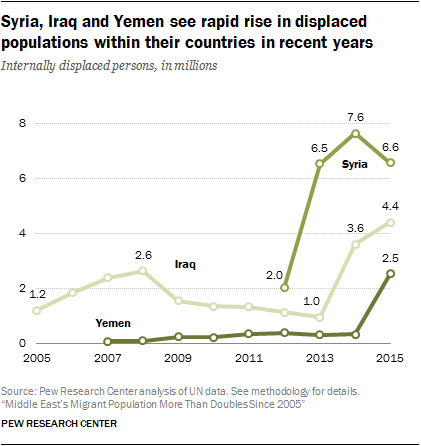 The conflict in Syria that followed 2011’s Arab Spring protests left about 2 million Syrians internally displaced by the end of 2012. As the insurgency opposed to President Bashar al-Assad’s regime intensified and the caliphate declared by the militant group ISIS continued to expand across Syria, this number of internally displaced persons grew to 6.6 million by the end of 2015.

Sectarian violence in Iraq led to a total of 2.6 million internally displaced people within Iraq by the end of 2008. The number of Iraqis displaced within their country then declined, as the intensity of civil strife subsided. However, armed campaigns by ISIS soon drove more people from their homes. The number of internally displaced Iraqis rose from slightly less than a million in 2013 to more than 4.4 million by 2015.

Migrants displaced across borders: Most refugees are in Jordan, Turkey, Lebanon and Iran

The number of refugees in a given country is based on the number who are registered for assistance from the United Nations High Commissioner for Refugees (for non-Palestinian refugees), the United Nations Relief and Works Agency (for Palestinian refugees) and other aid groups. Not all refugees register with such groups, however, and estimates of refugee populations in Middle Eastern countries based on these sources should be interpreted as minimum population estimates. 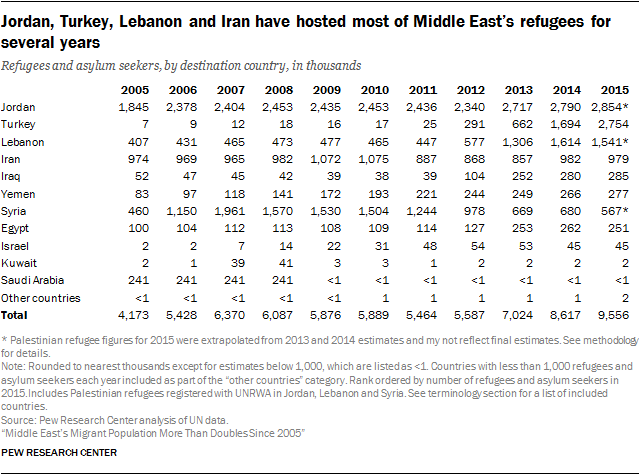 In 2015, fully 85% of refugees and asylum seekers in the Middle East lived in just four countries: Jordan (nearly 2.9 million), Turkey (about 2.8 million), Lebanon (about 1.5 million) and Iran (about 1 million). The number of refugees living in Turkey, Jordan and Lebanon grew rapidly after the onset of the Syrian conflict. Meanwhile, the number of refugees in Iran has been somewhat stable at roughly 1 million for the entire decade, with most of this refugee population displaced from neighboring Afghanistan. 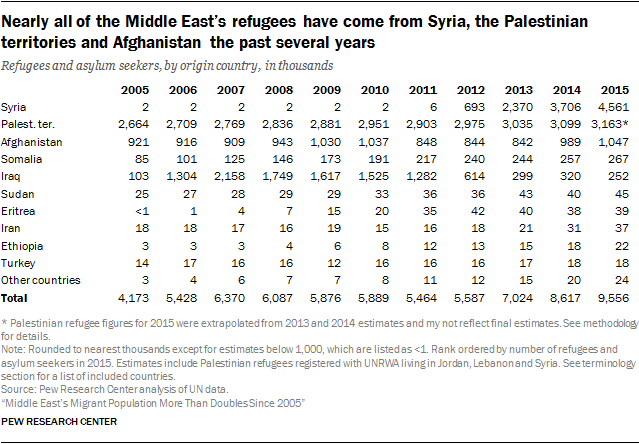 The majority of refugees and asylum seekers in the Middle East in 2015 can be traced to three points of origin: Syria (4.6 million), the Palestinian territories (3.2 million) and Afghanistan (1.0 million).

Middle East’s Migrant Population More Than Doubles Since 2005
1. Conflicts in Syria, Iraq and Yemen lead to millions of displaced migrants in the Middle East since 2005
Migrants displaced within their home countries: Rapid rise in Syria, Iraq and Yemen in recent yearsMigrants displaced across borders: Most refugees are in Jordan, Turkey, Lebanon and Iran
2. Economic growth attracts migrants to Persian Gulf Acknowledgments Methodology Appendix A: References Appendix B: Additional tables Appendix C: Countries by regional classification