Despite a recent drop in oil prices and the financial crisis of 2008 and 2009, the economies of Persian Gulf countries expanded between 2005 and 2015. This economic expansion in countries like Saudi Arabia, United Arab Emirates (UAE), Kuwait, Oman, Qatar and Bahrain has encouraged millions of migrants to move to the Middle East in search of economic opportunity. 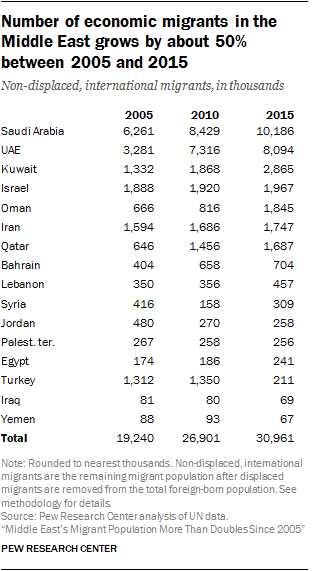 By contrast, Qatar and Oman saw the largest percentage increase in their non-displaced, international migrant populations, each rising more than 150% during the decade. 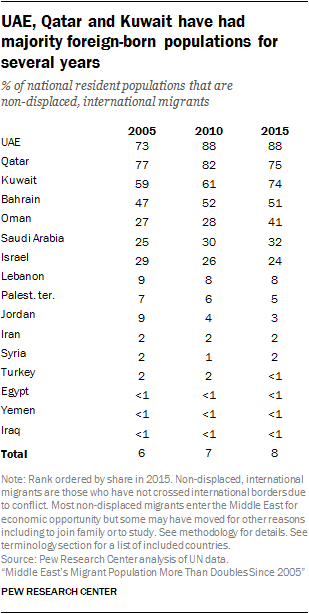 Many migrants come to Persian Gulf countries as manual laborers on one- to two-year work visas. Most come from South Asia (India, Bangladesh and Pakistan) and elsewhere in East Asia (Indonesia and Philippines). Some renew their work visas and live in the Middle East for years. The Gulf nations also attract a sizable number of business, educational and medical professionals from Europe, North America and elsewhere. And increasingly, international students from around the world are studying at newly established and expanded universities and colleges in the Persian Gulf region.

Today, several Persian Gulf states have majority foreign-born populations, mostly due to their high number of economic migrants. In fact, all Gulf Cooperation Council countries saw an increase in their share of foreign born between 2005 and 2015. About three-quarters or more of UAE (88%), Qatar (75%) and Kuwait (74%) populations in 2015 are non-displaced, international migrants. Meanwhile, about half (51%) of Bahrain’s population were foreign-born workers in 2015. Oman (41%) and Saudi Arabia (32%) have relatively smaller shares that are foreign born, but that are still significantly higher than the share found in many European countries or the United States.

Next: Acknowledgments
← Prev Page
Page1Page2You are reading page3Page4Page5Page6Page7Page8
Next Page →