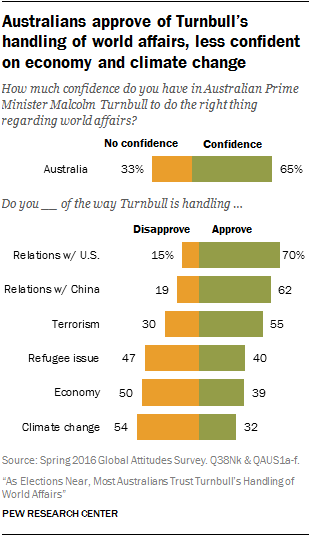 As Australia prepares for its July 2 national elections, a new poll shows robust support for Prime Minister Malcolm Turnbull’s handling of international affairs. This includes majority support for his dealings with the U.S. and China. However, only four-in-ten Australians approve of their leader’s handling of the refugee issue, while roughly a third give him positive marks on climate change.

Partisan differences surface in ratings of Turnbull, with more support for the incumbent prime minister coming from his own Liberal Party than from the opposition Labor Party (ALP) and the Greens.

These are among the findings of a new Pew Research Center report, based on a survey conducted April 6-28, 2016, among a nationally representative sample of 1,000 adults in Australia.

Supporters of the center-right Liberal Party and center-left Labor Party are much more focused on Australian issues (55% and 51% respectively say Australia should deal with its own problems) compared with the left-leaning environmentally oriented Greens, of whom only 17% say to focus on their own problems while 76% want to help other countries. Similarly, those on the right of the political spectrum are more country-first than those who put themselves on the left of the spectrum. Australians with a secondary education or less are more inclined to want to focus on Australia first compared to people with a post-secondary education or more.

When it comes to handling specific issues, Turnbull receives generally high marks in his dealing with the U.S., China and terrorism, but gets more mixed to negative ratings on his handling of refugees, the economy and climate change. 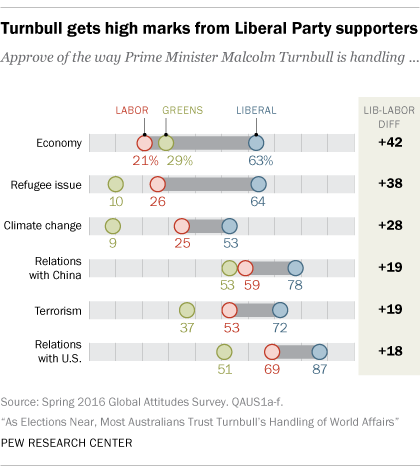 Majorities in Australia approve of the prime minister’s handling of relations with the U.S. (70%), China (62%) and terrorism (55%). As with all of Turnbull’s issue ratings, he receives higher marks from his own Liberal Party sympathizers compared with those who support the Labor opposition or the Greens. However, many ALP supporters still favor Turnbull’s handling of these three issues, as do many Greens, except on his dealing with terrorism.

One major issue on which the Australian public is more divided is that of refugees. Here, only four-in-ten Australians approve of the PM’s job, with 47% disapproving. While Turnbull’s policy on refugees is similar to that of his predecessor, Coalition member Tony Abbott, some worry about anti-refugee rhetoric in the country. And the gulf between the parties on this question is huge. Fully 64% of Liberal followers approve of his handling of refugees, compared with only 26% among Labor supporters and just one-in-ten Greens.

Turnbull gets negative marks for his handling of the economy. Half of Australians disapprove of his job performance on the economy, with only 39% approving. While the national economy is still growing, there are concerns about the continued “income recession” in the country. Again, there are massive party differences on this question, with most of Turnbull’s support coming from Liberal followers.

Among the issues tested, the prime minister gets his lowest marks for his handling of climate change.1 More than half of Australians (54%) disapprove of his job performance on the issue of climate change, with only 32% approving. While Turnbull supports action on climate change, Labor leaders have criticized him sharply for not doing enough to address the issue.

As might be expected, Greens followers are the most critical on this issue, but even among his own Liberals, only 53% approve of Turnbull on this issue.

Public split on which matters more to Australia: China or U.S.

In foreign affairs, Australia has long held strong relationships with the nations of both Asia and the West. When asked whether, taking into account political and economic ties, China or the U.S. is more important to Australia, 45% answer China, while nearly an identical percentage say the U.S. (42%). About one-in-ten (11%) volunteer that they are equally important.

By comparison, a 2015 survey found that when having to choose on the basis of economic ties only, half of Australians prefer China, while 27% say the U.S. (China is by far Australia’s largest trading partner.)

Liberal and Labor supporters are also divided on this question. However, Greens are firmly in the China camp, with half preferring China and only a quarter choosing the U.S.

As Elections Near, Most Australians Trust Turnbull’s Handling of World Affairs
Australians hesitant about international roleTurnbull trusted as world leader, but parties differ on key issuesPublic split on which matters more to Australia: China or U.S.
Acknowledgements Methodology