Former U.S. Secretary of State Hillary Clinton wrote in October, 2011 in Foreign Policy that the U.S. planned to pivot to Asia in the wake of the wind down from the Iraq and Afghanistan wars. The pivot, or rebalancing, has two fulcrums: economic, through a Trans-Pacific Partnership (TPP) trade and investment treaty with 11 other nations that border the Pacific, and military, through a renewed U.S. commitment to defend its Asian allies.

The ultimate success of the pivot can only be judged over time. But a measure of its current credibility is public support for transpacific economic integration, Americans’ willingness to defend their Asian allies and those allies’ faith that Uncle Sam will come to their defense.

Both the economic and military pivots have general public support on both sides of the Pacific. Half or more of the publics in seven of the nine TPP nations surveyed voice the view that such an accord would be a good thing for their country. The American public is willing to use military force to defend its Asian allies if they get into a military conflict with China. And those allies – Japan, the Philippines and South Korea – trust that Washington will come to their aid.

TPP: Americans among the Least Supportive

If successfully concluded, participating economies would account for 40% of the world’s economy and 26% of world trade. 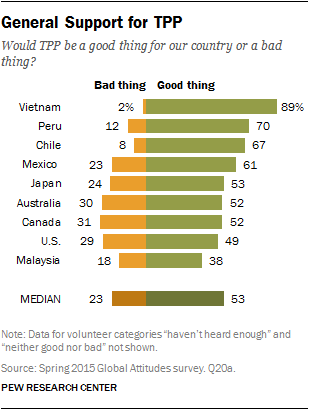 The 2015 Pew Research survey involved 9 of the 12 countries engaged in the TPP negotiations. Among those publics, a median of 53% think the deal would be a good thing for their country. A median of 23% say it would be a bad thing.

Notably, there is a gender gap in public attitudes toward the deal in four of the largest economies negotiating TPP. In the U.S., 53% of men favor TPP, but only 45% of women agree. In Japan, 60% of men think the trade deal would be good for the country, while only 46% of Japanese women agree. In Canada, the gender gap is 13 percentage points: 59% of men favor compared with 46% of women. In Australia, the gap is seven points: 56% to 49%. 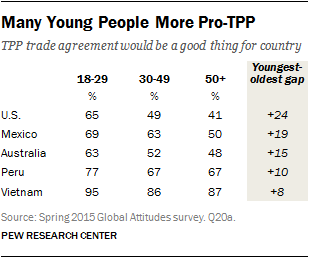 In addition to gender and age gaps, there is a partisan divide on TPP in a few key nations. In the U.S., roughly half (51%) of Democrats think this trade deal would be a good thing for the country, while only 43% of Republicans agree. In Canada, 70% of supporters of the ruling Conservative Party back the TPP, but only 60% of Liberals and 42% of adherents of the New Democratic Party agree. In Australia, 67% of backers of the Liberal National Party/Country Liberal Party support TPP, but only 44% of the opposition Labor Party favor the trade agreement. 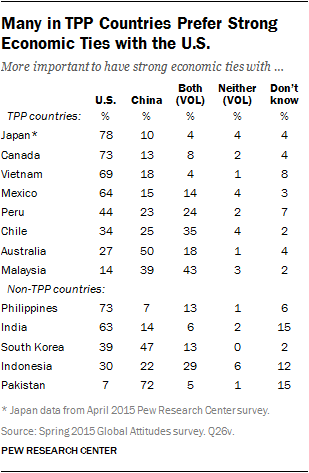 In both TPP and non-TPP Pacific Rim nations, publics were asked if they favor stronger economic ties with Washington or with Beijing. Seven-in-ten or more Japanese (78%), Filipinos (73%) and Canadians (73%) choose the U.S. Nearly seven-in-ten Vietnamese (69%) agree. Malaysians (14%) are the least supportive of a closer economic relationship with the U.S.

The greatest support for deeper economic ties with China is in Australia (50%) and South Korea (47%).

In addition, large numbers of Malaysians (43%) and Chileans (35%) volunteer that they would like to have strong commercial relations with both China and the U.S.

The U.S. Quadrennial Defense Review has committed the U.S. to rebalance military resources to the Asia-Pacific region. Half or more of the publics in six of ten nations surveyed think this is a good thing because it could help maintain peace in the region. However, Americans are divided on the issue. 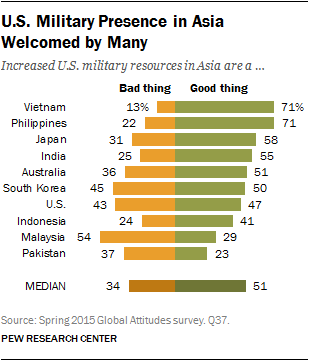 The strongest support for the defense pivot is found in Vietnam (71%) and the Philippines (71%). Only roughly half of Australians (51%) and South Koreans (50%) back this rebalancing despite the fact that their governments are among Washington’s closest strategic allies in the region.

The greatest opposition to the U.S. defense pivot is in Malaysia, where 54% believe it is a bad thing because it could lead to conflict with China.

Americans are ambivalent about whether a greater military presence in Asia is a good thing or whether it is a bad thing: 47% favor it, 43% are opposed. A majority of Republicans (58%) think the military rebalancing is a good idea. But only 42% of Democrats support it while 47% do not. Americans ages 50 and older are more supportive (51%) of the security pivot than those ages 18 to 29 (37%).

It is also older (53%) rather than younger Australians (43%) who support greater U.S. military involvement in the region. A similar generation gap exists in South Korea with 57% of older Koreans in favor of the pivot versus 49% of younger ones.

Partisan political divisions on the pivot are not limited to the U.S. In Australia, 62% of Liberals think America committing more military resources to Asia is a good thing, while only 49% of Labor Party supporters agree. 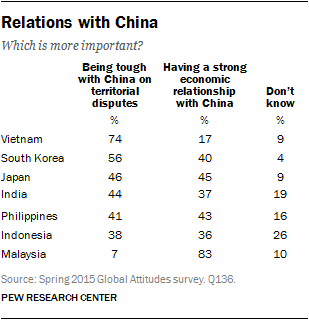 China is currently engaged in a number of territorial disputes in the region over sovereignty in the South China and East China Seas. Support for or opposition to a greater U.S. military presence in the Asia-Pacific often reflects a broader public preference for either standing up to China in these disputes or deepening commercial engagement with Beijing, the dominant economy in the region.

Nearly three-quarters of Vietnamese (74%) say it is more important to be tough with China on territorial disputes than it is to have a strong economic relationship (17%) with their neighbor to the north. This may be one important reason why roughly seven-in-ten (71%) Vietnamese back increased American military resources being committed to the Asia-Pacific.

At the same time, 83% of Malaysians say it is more important to have deeper economic ties with China than to stand up to Beijing over territorial issues. Given such sentiment, Malaysian opposition to a U.S. military pivot to Asia is not surprising.

Japanese and Filipinos are divided on confronting China or getting closer to her economically, despite the fact that both publics support a greater U.S. military presence in the region. And the South Koreans are more supportive of being tough with China than they are of the U.S. defense pivot to Asia.

Some young Asians prefer standing up to China on territorial issues over closer economic ties with Beijing. There is a 17 percentage point generation gap on this issue in Vietnam (84% of those under 30 say be tough with China, compared with 67% of people ages 50 and older). The generation gap in South Korea is 9 points, with 60% of those ages 18 to 29 saying being tough with China is more important compared with 51% of those ages 50 and older, and in Indonesia 12 points (45% of younger vs 33% of older respondents). 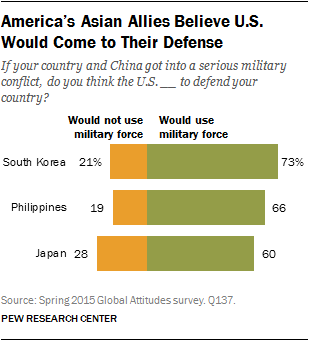 The U.S. government has long been committed to the defense of its Asian allies. A majority of Americans support that commitment. When asked if the U.S. should defend one of its Asian allies if it got into a serious military conflict with China, 56% of Americans say Washington should respond with military force. However, American men and women disagree: 64% of men say Washington should respond with force, but only 48% of women hold this view. And there is a partisan division on the willingness to come to Asian allies’ defense — while 68% of Republicans think the U.S. should do so, only 49% of Democrats agree.

Major U.S. allies in the region expect Uncle Sam to come to their defense in the event of a clash with China. More than seven-in-ten South Koreans (73%), roughly two-thirds of Filipinos (66%) and six-in-ten Japanese believe that if their country and China got into a serious military conflict, the U.S. would use military force to defend them.

Global Publics Back U.S. on Fighting ISIS, but Are Critical of Post-9/11 Torture 1. America’s Global Image 2. Views of China and the Global Balance of Power
3. Asia in Focus
TPP: Americans among the Least SupportiveThe Defense Pivot
Methodology