Since the 1947 partition of India and Pakistan, the Indo-Pakistani relationship has been fraught with tension, manifesting itself in several wars, ongoing border disputes and terrorist incidents.

Only 13% of all Indians have a favorable view of Pakistan; 59% have an unfavorable opinion of their Muslim neighbor. This is the lowest percentage approval of Pakistan among the nine countries where this question was asked. 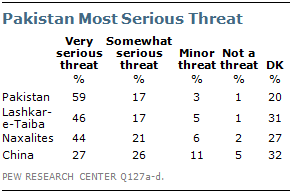 About six-in-ten Indians (59%) see Pakistan as a very serious threat to India. Pakistan is viewed as a far greater menace than Lashkar-e-Taiba, an extremist organization, the Naxalite Maoist domestic insurgency (which in 2011 was blamed for about 600 deaths) or the security challenge posed by China, which fought a war with India in 1962 and in recent years has periodically massed troops on India’s northeastern frontier.

Despite their generally unfavorable sentiment toward their northwestern neighbor, Indians are strongly supportive of improving relations with their long-time adversary. Seven-in-ten Indians think it is important to improve ties with Pakistan and nearly two-thirds (64%) back increased Indo-Pakistani trade. An overwhelming 77% think it is important to resolve the Kashmir dispute and 58% favor further talks to reduce India-Pakistan tensions.

Views of Each Other

Indians and Pakistanis see their often fractious relationship in a similarly negative light. But both want their bilateral relations to improve. 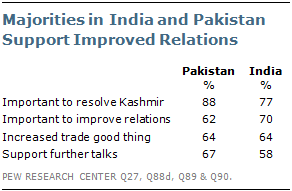 But majorities in both countries want to see their governments pursue efforts to better cross-border ties. Seven-in-ten Indians and roughly six-in-ten Pakistanis (62%) think it is important to improve relations. Nearly two-thirds of both Indians and Pakistanis say that increased trade between the two countries would be a good thing. But, while supportive, Indians are less-intensely focused than Pakistanis on resolving the Kashmir dispute. About six-in-ten Indians (59%) say it is very important to resolve Indo-Pakistani differences over that region, compared with roughly eight-in-ten Pakistanis (79%) who hold such strong sentiments.

Next: Chapter 3. India and the Rest of the World
← Prev Page
Page1Page2You are reading page3Page4Page5Page6
Next Page →

Deepening Economic Doubts in India Chapter 1. Growing Concern about the Nation and the Economy
Chapter 2. India and Pakistan
Views of Each Other
Chapter 3. India and the Rest of the World Chapter 4. Values Under Stress Survey Methods