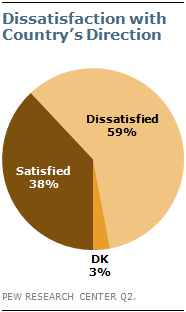 Faced with a slowing economy and political gridlock, Indians are dissatisfied with the ways things are going in their country, increasingly gloomy about the country’s economic future and also worried about their children’s economic prospects. Gone is the sense of well-being and optimism that prevailed just a few years ago when many private economists forecast that Indian economic growth would soon surpass that in China.

Nearly six-in-ten Indians (59%) say they are dissatisfied with India’s direction; only 38% are satisfied. This is a 13 percentage point decline in satisfaction since last year, one of the greatest drops in satisfaction among the 17 nations surveyed by the Pew Research Center in both 2011 and 2012. Indian satisfaction now trails that in China (82%), Germany (53%) and Brazil (43%), but still exceeds that in the United States (29%). 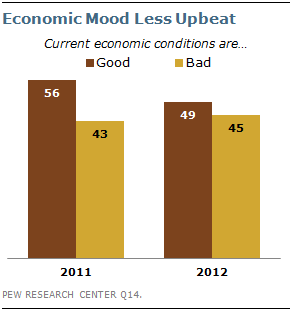 Falling satisfaction is coupled with widespread concern about the economy, especially unemployment and rising prices, which roughly eight-in-ten Indians say are very big problems. Nearly half of Indians (49%) think current economic conditions are good, but such sentiment is down seven percentage points from 2011. Not surprisingly, Indians with relatively higher incomes are far more likely than those with low incomes to see the economy in a positive light.1 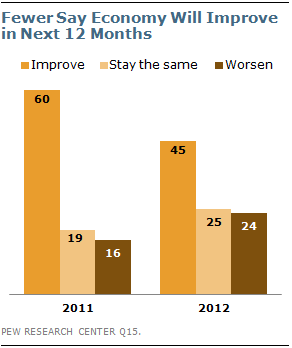 The public is also pessimistic about the economy’s future. Just 45% of Indians think the economy will improve over the next 12 months, down from 60% in 2011. Again, richer Indians are much more likely than poorer Indians to be optimistic. The public outlook in India is far more circumspect than that of India’s emerging market rivals, Brazil (where 84% foresee economic improvement) or China (83%). But such pessimism is consistent with a consensus view outside India that recent heady economic gains are now a thing of the past. In July, 2012, the International Monetary Fund forecast only 6.1% growth in 2012 for India and a 6.5% expansion in 2013. Both forecasts reflect downgraded expectations just since April, 2012.3 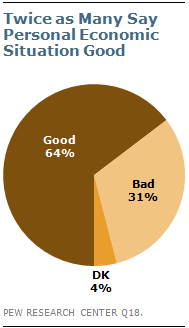 Nevertheless, the Indian public is still upbeat about personal finances. Nearly two-thirds (64%) think their own economic situation is good. This personal optimism is not uniquely Indian. In 16 of the 21 nations surveyed in 2012 more people rate their personal economic condition as good than their country’s situation. But the difference in perception of personal finances versus national economic well-being in India is half that in many of those other countries, suggesting that Indians’ assessments of their country’s economic plight and their opinion about their own circumstances are more intertwined than in many other societies.

Indians’ contentment with their current financial situation does not, however, extend to their children’s future. About two-thirds (66%) expect that their kids will have a difficult time getting a better job and becoming wealthier than themselves. This pessimism is widespread among all income groups. It also prevails among those with and without a college education.

Despite their increased economic gloom and doubts about their children’s prospects, half of Indians say they are better off than they were five years ago, possibly reflecting a one-third increase in gross national income per capita over the same period.4 This relative sense of economic well-being is particularly strong among those with a college education and those with higher incomes. Moreover, two-thirds of Indians say they have a better standard of living than their parents had at a comparable age. Again, this is particularly the case among those with a college education and Indians in upper income brackets.

Indians’ sense of their recent personal economic progress exceeds such assessments by people in most other nations surveyed by the Pew Research Center in 2012. Indians are 27 percentage points more likely than the median among the other countries surveyed to think they are financially ahead of where they were five years ago and 10 points more likely to say they are doing better than their parents did at their age. Only the Brazilians and the Chinese are more likely than Indians to say that they are more prosperous than half a decade ago. And only the Chinese, Brazilians, Spanish and Germans are more likely to think they are faring better than their parents.

Wealthier Indians are particularly upbeat in their assessment of the Indian economy relative to the views of lower-income Indians. The difference in views between richer and poorer Indians are generally more pronounced than those in Brazil, China or Turkey on a range of economic issues, including whether their standard of living is better than that of their parents, whether they are better off than five years ago, and whether the economy will improve over the next 12 months (for more on other countries’ attitudes about the economy, see “Pervasive Gloom about the World Economy,” released July 12, 2012). 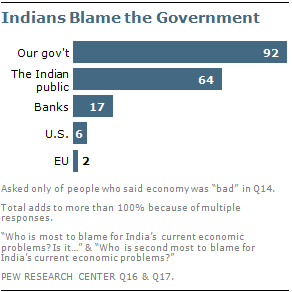 Among the 45% of Indians who think the economy is doing poorly, the government is the leading culprit. After months of government missteps, deadlock in the Indian parliament and widely-exposed incidents of public corruption, 92% of those who believe the economy is in bad shape say “our government” is primarily or secondarily to blame. However, nearly two-in-three (64%) also say the public is responsible for the country’s economic woes. In finding fault with their government, Indians are not unlike people in most of the other countries surveyed. But Indians are among the most critical. 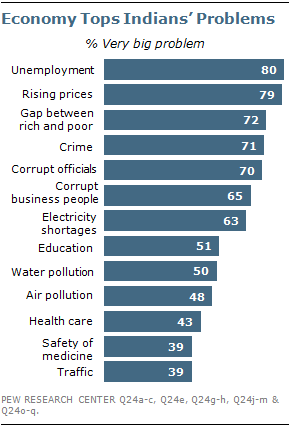 Given their concerns about the economy, it is hardly surprising that economic issues — such as unemployment and inflation — top Indians’ litany of the major challenges facing the nation. About eight-in-ten say joblessness (80%) and rising prices (79%) are very big national problems. (Inflation was 7.5% in the first three months of 2012, immediately before the survey.5) About seven-in-ten (72%) cite the gap between the rich and the poor, with more urban than rural residents complaining about such inequality.

Crime and corruption — in both the public and private spheres — are also seen as major and pervasive challenges. These concerns are widely shared among both men and women, across age groups and among people of all educational and income categories. 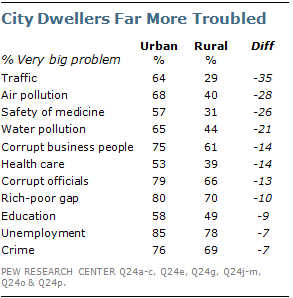 Electricity shortages are another Indian concern. About six-in-ten Indians (63%) complain about electricity shortages.6 This complaint may stem from the fact that about a quarter of India’s power output is lost through transmission and distribution problems, according to the World Bank. This compares to losses of roughly five percent in China.7 Notably, many other problems are felt far more intensely in urban areas than in the countryside. As might be expected, city dwellers are far more likely to complain about traffic and air and water pollution.

Next: Chapter 2. India and Pakistan
← Prev Page
Page1You are reading page2Page3Page4Page5Page6
Next Page →

Deepening Economic Doubts in India
Chapter 1. Growing Concern about the Nation and the Economy
The Blame Game
Chapter 2. India and Pakistan Chapter 3. India and the Rest of the World Chapter 4. Values Under Stress Survey Methods

East Germany has narrowed economic gap with West Germany since fall of communism, but still lags