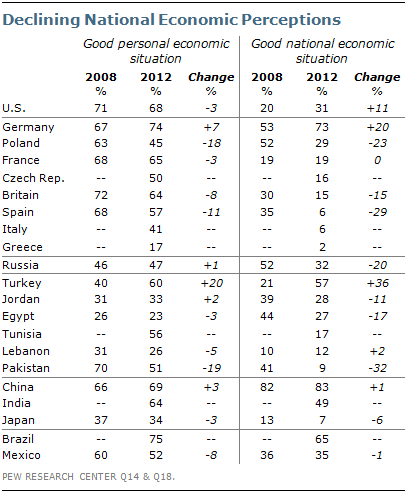 The economic mood is exceedingly glum all around the world. A median of just 27 percent think their national economy is doing well, according to a survey in 21 countries by the Pew Research Center’s Global Attitudes Project. Only in China (83%), Germany (73%), Brazil (65%) and Turkey (57%) do most people report that current national economic conditions are good.

The public mood about the economy has worsened since 2008 in eight of 15 countries for which there is comparable data, while it is essentially unchanged in four others. The Chinese are the lone exception. They have been positive about their economy for the past decade.

And there is some optimism that things will improve in the next 12 months, especially in Brazil (84%), China (83%) and Tunisia (75%). Nevertheless, pessimism about young peoples’ ability to do better than their parents is rampant, particularly in Europe (a median of only 9% think it will be easy) and Japan (10%). Again, the lone exception is China, where 57% say it will be easy for their children to become wealthier or to get a better job.

There is a striking contrast between the economic outlook in four of the emerging markets surveyed – Brazil, China, India and Turkey – and the European Union and the U.S. People living in these economies are generally more likely than Americans or Europeans to say that they are doing better than their parents. They are twice as likely as Americans and more than three times as likely as Europeans to think economic conditions in their countries are good. They are three times more likely than Europeans and more than twice as likely as Americans to say that they are financially better off compared with five years ago. And, while people in emerging markets also worry about the economic mobility of their children, they are four times more optimistic about the future for their kids than the Europeans and twice as optimistic as Americans.

In contrast, economic attitudes are particularly gloomy in the four nations polled in the Arab world. Only a third of those surveyed think they are better off than their parents at the same age. A median of only 30% say they are doing well financially. And a median of only 16% believe their children will have an easy time becoming economically better off than themselves.

Tough times have undermined the work ethic in a number of countries among people who are suffering economically. Those who say their personal finances are a mess are far less likely than those who are doing well to believe that most people succeed if they work hard. 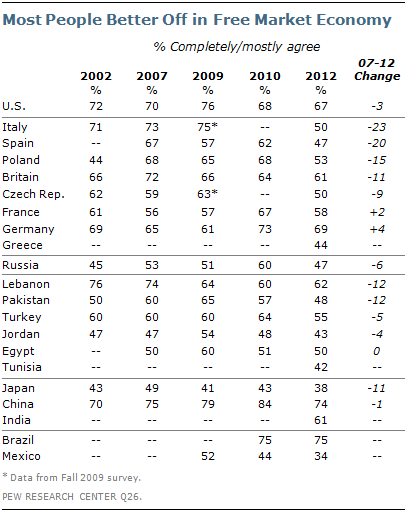 The global economic crisis has eroded support for capitalism. In 11 of the 21 nations surveyed, half or fewer now agree with the statement that people are better off in a free market economy even though some people are rich and some are poor. And such backing is down in 9 of 16 nations with comparable data since 2007, before the Great Recession began. Such disenchantment is particularly acute in Italy (where support for a free market economy is down 23 percentage points), Spain (20 points) and Poland (15 points).

These are among the key findings from a new survey by the Pew Research Center’s Global Attitudes Project, conducted in 21 countries among 26,210 respondents from March 17 to April 20, 2012.

Next: Chapter 1. The National Report Card
← Prev Page
You are reading page1Page2Page3Page4Page5Page6Page7
Next Page →