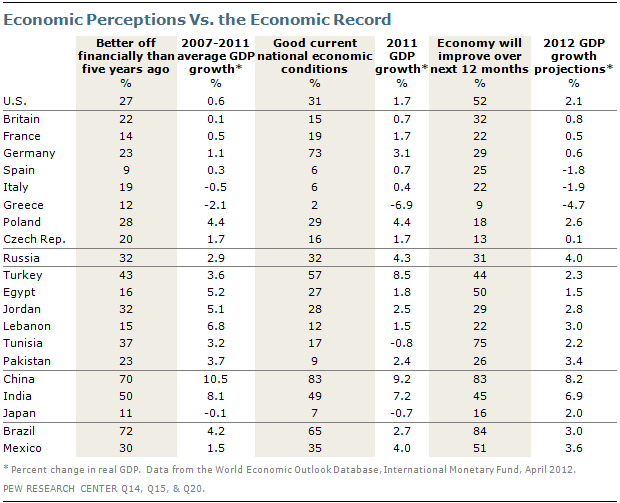 The public’s retrospective perception of the economy is generally in line with economic experience. Seven-in-ten Chinese (70%) say they are better off than they were five years ago. And China experienced the fastest growth over the last half decade (averaging 10.5% annually from 2007 to 2011) among the 21 countries surveyed by the Pew Research Center. Similarly, 50% of Indians say they are better off and India averaged 8.1% growth over that period. More than seven-in-ten (72%) Brazilians say economic times are better now and Brazil averaged 4.2% growth over the last five years. 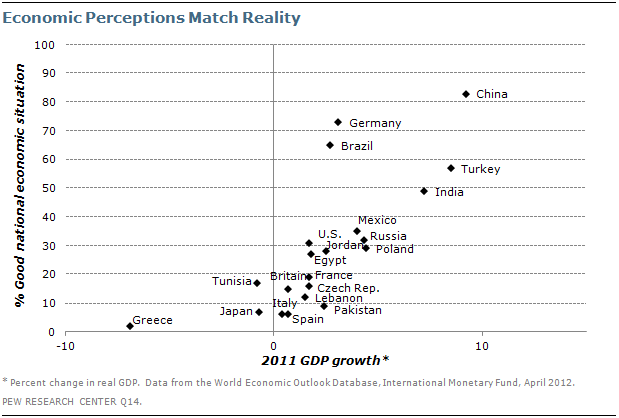 There is a strong correlation between recent economic experience and people’s perception of their current national economic situation. Nearly three-quarters of Germans (73%) are satisfied with how the Germany economy is doing, reflecting an International Monetary Fund report of 3.1% growth last year. Conversely, only 6% of the Spanish give a good grade to their economy, which grew by only 0.7% in 2011.

There is a similar pattern with expectations about the economy over the next 12 months. More than eight-in-ten Chinese (83%) think their economy is going to improve over the next year. And the International Monetary Fund agrees, projecting a robust 8.2% growth.

Next: Chapter 4. The Casualties: Faith in Hard Work and Capitalism
← Prev Page
Page1Page2Page3You are reading page4Page5Page6Page7
Next Page →