For many Americans, “socialism” is a word that evokes a weakened work ethic, stifled innovation and excessive reliance on the government. For others, it represents a fairer, more generous society. 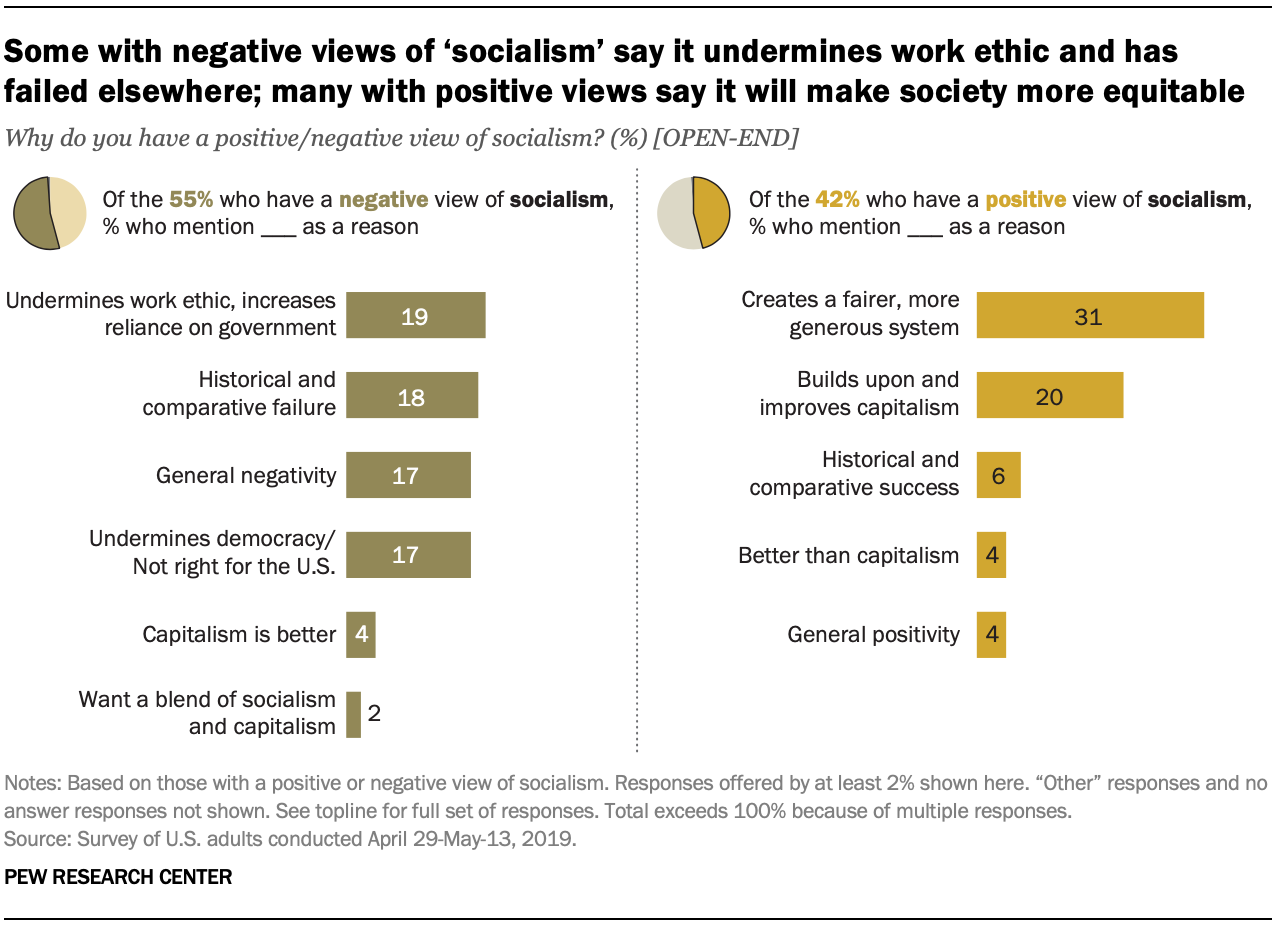 Earlier this year, Pew Research Center found that 55% of Americans had a negative impression of “socialism,” while 42% expressed a positive view. About two-thirds (65%) said they had a positive view of “capitalism,” and a third viewed it negatively.

But what’s behind these opinions? To find out, we asked people to describe – in their own words – why they had positive or negative impressions of socialism and capitalism.

Some who view socialism negatively portray it as a serious threat to capitalism in the U.S., while others who view it positively say the opposite – that it builds upon and improves capitalism. And some who have a positive view of socialism express an explicit preference for a system that blends socialism and capitalism.

While many of the open-ended impressions are revealing, a sizable share of people either did not share their views or articulated their reasons in simple terms, stating that socialism or capitalism is “good” or “bad,” or that one is better than the other. A quarter of those with a negative opinion of socialism – and 31% with a positive view – declined to offer a reason for their opinion.

But others mentioned history, the experiences of other nations, personal experiences or their own understandings of the terms in explaining the reasons behind their opinions of socialism and capitalism. 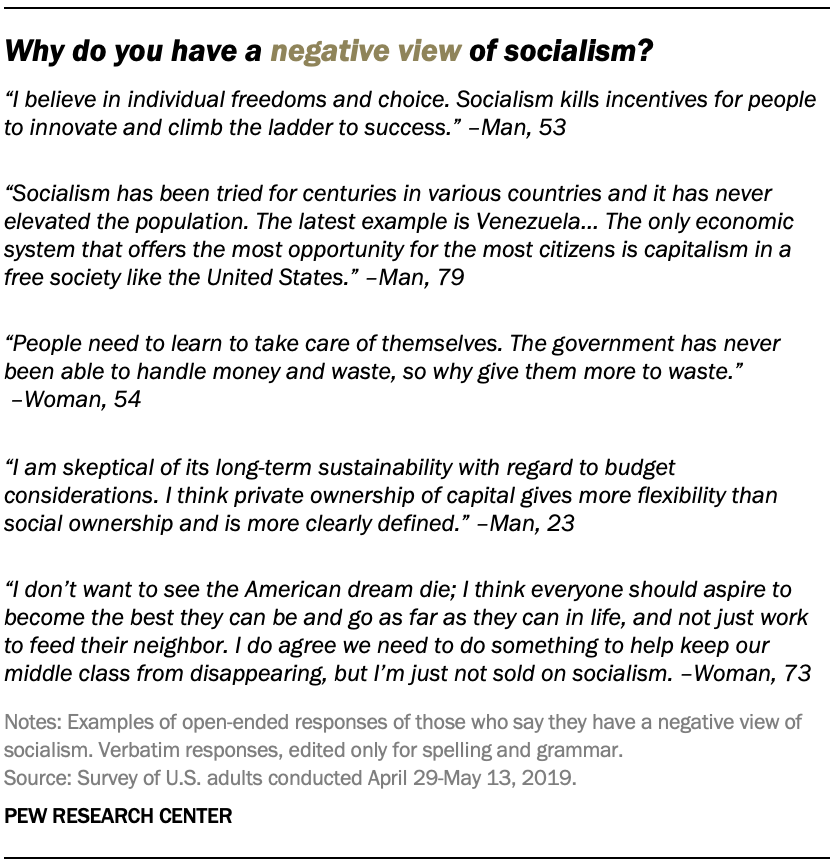 Among the majority of Americans who have a negative impression of socialism, no single reason stands out. About one-in-five (19%) say that socialism undercuts people’s initiative and work ethic, making people too reliant on the government for support. As a 53-year-old man put it: “I believe in individual freedoms and choice. Socialism kills incentives for people to innovate and climb the ladder of success.”

About as many critics of socialism (18%) refer to how socialism has failed historically or in other countries, such as Venezuela or Russia. A comparable share of those with negative impressions of socialism (17%) say it is not consistent with democracy in the United States or is simply not right for the U.S.

Many with positive views of socialism say it fosters equality 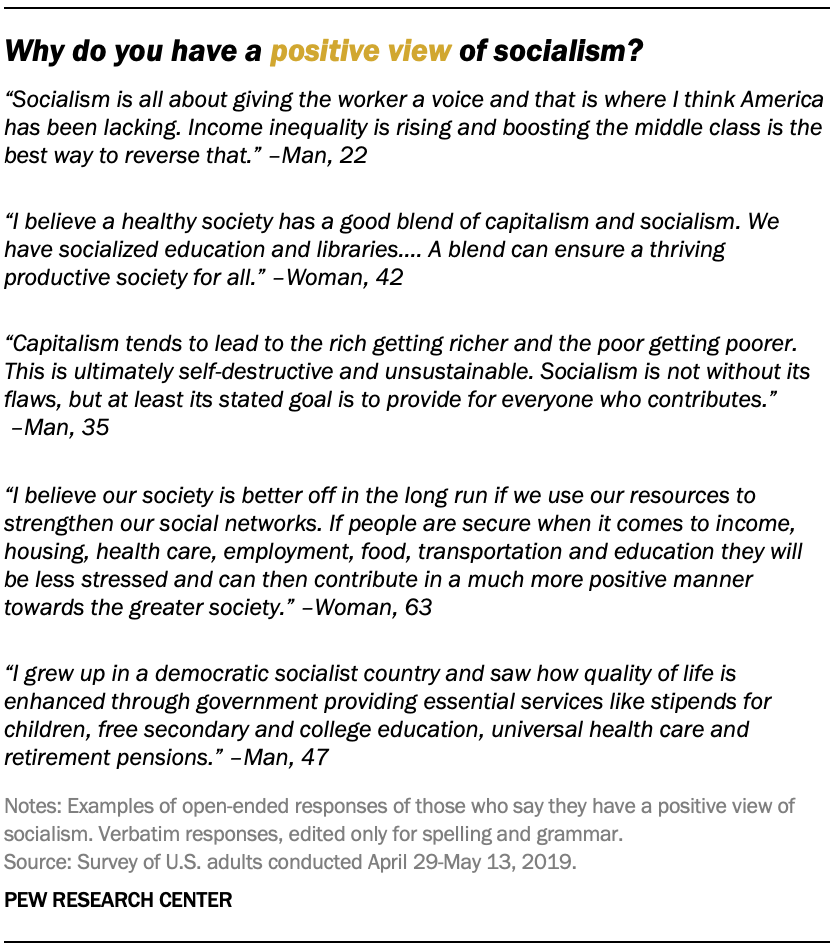 About four-in-ten Americans (42%) have positive views of socialism. Among this group, the most frequently cited reason is that it will result in fairer, more generous society (31% say this). This includes 10% who specifically express a belief that it is important for the government to take care of its citizens or for fellow citizens to care for each other.

A smaller share of Americans who have a positive view of socialism say it would build upon and improve capitalism (20%). Some in this group say the U.S. already has socialism, in the form of government programs. Others specifically say they prefer a blend of socialism and capitalism. “A blend can ensure a thriving productive society for all,” said a 42-year-old woman.

Just 2% of those who have a positive view of socialism explicitly mention the phrase “democratic socialism” as the reason.

While some who express a negative view of socialism link it with countries like Venezuela, some of those with a positive view point to different countries – such as Denmark or Finland – as models. Among those with a positive impression, 6% say it has been a historical or comparative success, with most of these people citing how it has worked in European countries.

‘Capitalism’ viewed positively by about two-thirds of Americans

And while those with a positive view of socialism say it could bring increased equality, a common theme among critics of capitalism is that it has led to unequal distribution of wealth in this country. 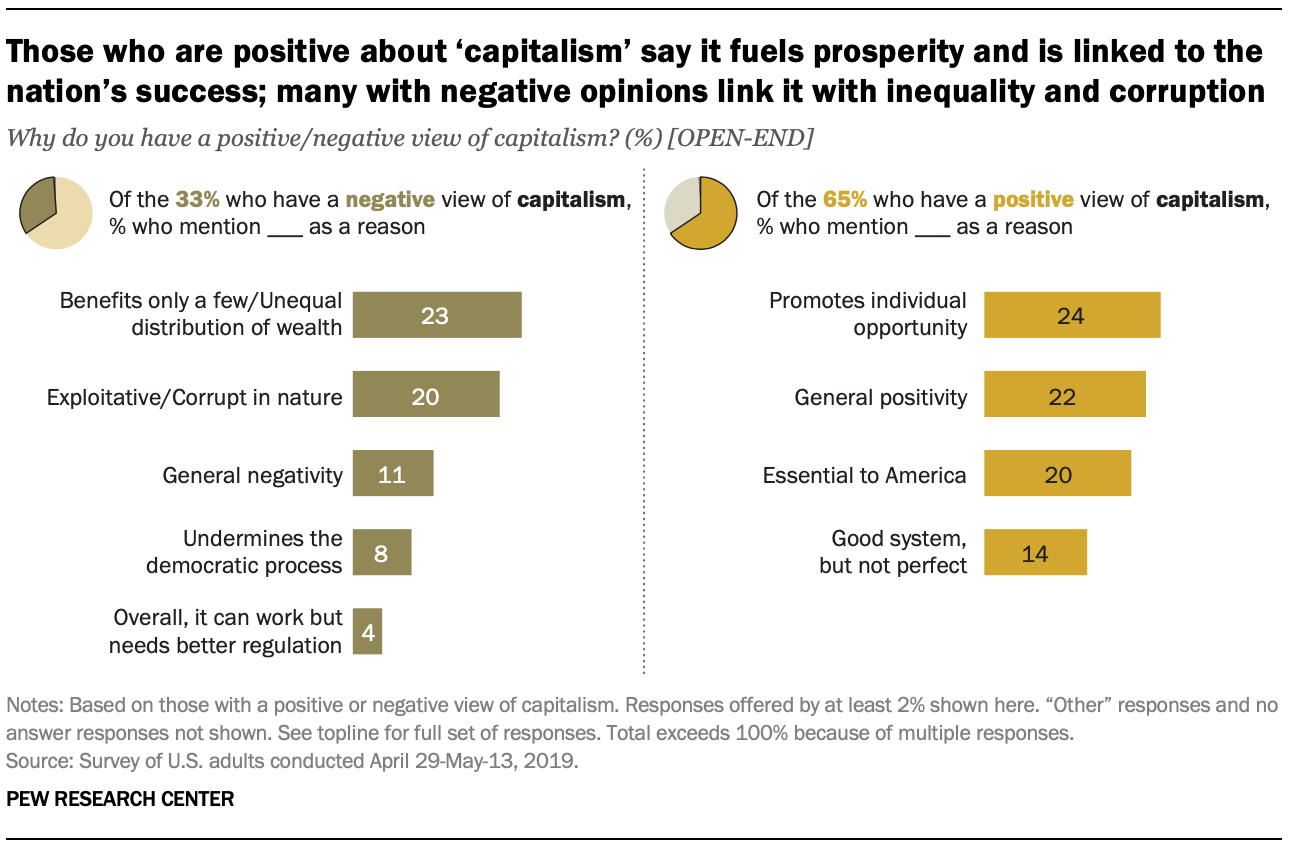 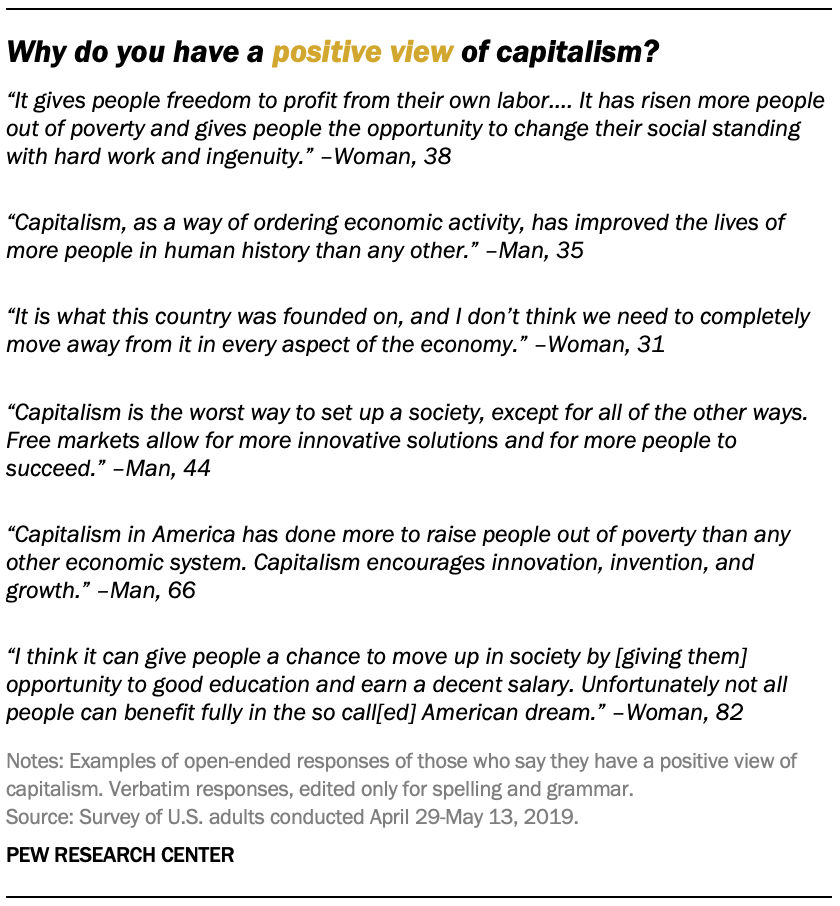 Nearly a quarter of Americans who have a positive view of capitalism (24%) say they hold their views because the system provides opportunity for individual financial growth. A similar share (22%) expresses general positivity towards capitalism, saying that the system works.

One-in-five adults with positive views of capitalism associate the system with the foundation of America: They mention that capitalism has advanced America’s economic strength, that America was established under the idea of capitalism, or that capitalism is essential to maintaining freedom in the country.

Another 14% say that although they view capitalism positively overall, the system is not perfect. This includes 5% who say capitalism has caused economic inequality and corruption and 4% who express a desire to see more regulation or a mixed system with socialism.

“Capitalism is the worst way to set up a society, except for all the other ways,” said a 44-year-old man. “Free markets allow for more innovative solutions and for more people to succeed.” 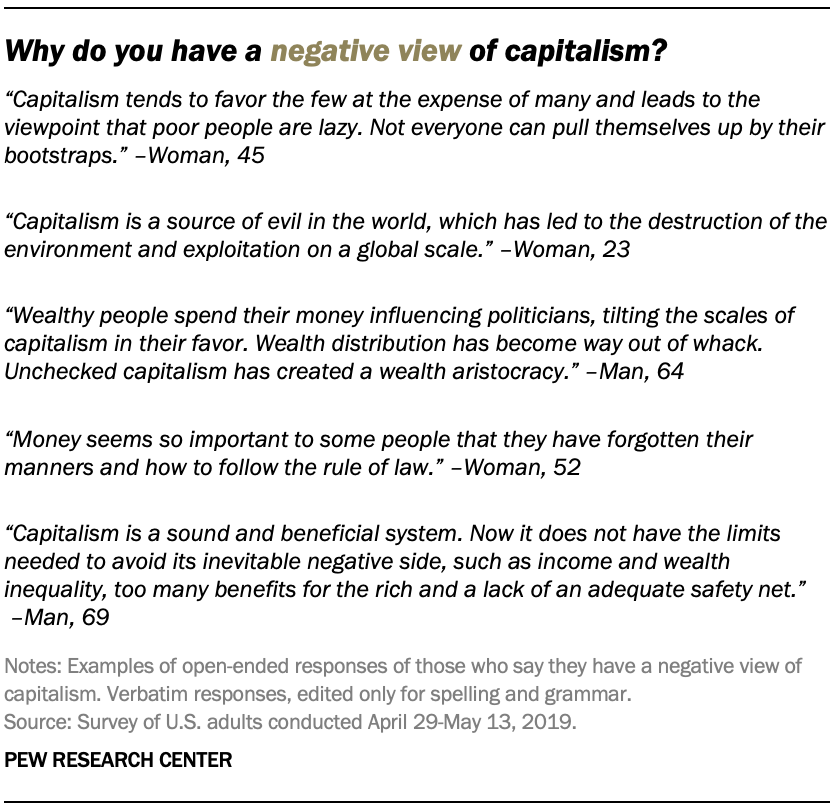 When those who hold negative views of capitalism are asked why they hold this view, about a quarter (23%) say that capitalism creates an unfair economic structure, mentioning that the system only benefits a small number of people or that wealth in this country is distributed poorly.

A similar share (20%) says that capitalism has an exploitative and corrupt nature, often hurting either people or the environment.

A smaller share of Americans who have negative views of capitalism (8%) mention that corporations and wealthy people undermine the democratic process by having too much power in political matters. And 4% of those with a negative view say that capitalism can work, but to do so it needs better oversight and regulation.

In Their Own Words: Behind Americans’ Views of ‘Socialism’ and ‘Capitalism’
Socialism’s critics say it weakens work ethic; some point to VenezuelaMany with positive views of socialism say it fosters equality‘Capitalism’ viewed positively by about two-thirds of Americans
Methodology