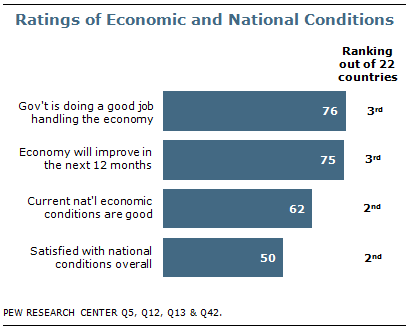 As the eight years of Luiz Inácio Lula da Silva’s presidency draw to a close, Brazilians offer largely positive assessments of where their country stands. At a time when global publics are mostly glum about the way things are going in their countries, half of Brazilians say they are satisfied with national conditions, and 62% say their nation’s economy is in good shape. Of the 21 other publics included in the 2010 Pew Global Attitudes survey, only the Chinese are more upbeat about their country’s overall direction and economic conditions.

A solid majority of Brazilians believe the outgoing president and the national government are having a good influence on the country, and most give the government good ratings for its handling of the economy. Moreover, the Bolsa Família program, Lula’s signature initiative, which provides cash incentives to the country’s poorest families for keeping their children in school and getting them vaccinated, is popular with Brazilians among all demographic groups.

Lula is also praised for his performance on the world stage. Nearly eight-in-ten Brazilians express confidence in their president to do the right thing in world affairs, and about three-quarters say Brazil already is (24%) or will eventually be (53%) one of the most powerful nations in the world. A large majority believes their country is well-liked around the globe. 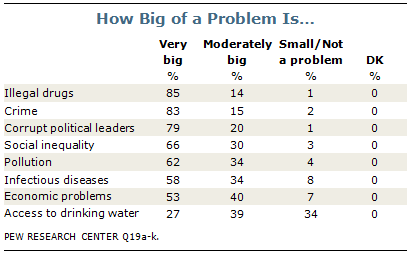 Yet, despite the generally positive national mood, Brazilians say their country faces some major challenges. In particular, more than eight-in-ten say that illegal drugs and crime are very serious problems in Brazil; more than half say there are areas near their homes where they would be afraid to walk alone at night. More than six-in-ten Brazilians also describe corrupt political leaders, social inequality and pollution as major problems.

These are the latest findings from a spring 2010 survey of Brazil by the Pew Research Center’s Global Attitudes Project. Face-to-face interviews were conducted with 1,000 adults in Brazil between April 10 and May 6, 2010. The sample is representative of the country’s adult population, and the margin of sampling error for the results is plus or minus 4.5 percentage points. (Brazil was surveyed as part of the Spring 2010 Pew Global Attitudes Survey, which included 22 nations. For more findings from this survey, see “Obama More Popular Abroad Than at Home, Global Image of U.S. Continues to Benefit,” released June 17, 2010.)

Positive Views of U.S. and China Too 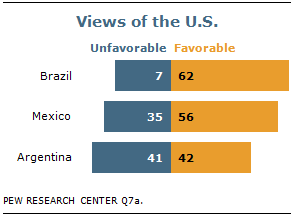 neighbor to the north. And in Argentina, about the same number rate the U.S. favorably (42%) as rate it unfavorably (41%).

U.S. President Barack Obama also receives higher marks in Brazil than in Argentina and Mexico; 56% of Brazilians have confidence in the American president to do the right thing in world affairs, compared with 49% of Argentines and 43% of Mexicans. 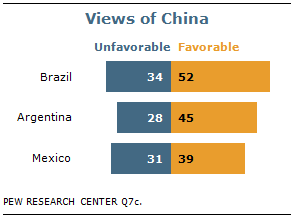 Views of China are also more positive in Brazil. While a slim majority of Brazilians (52%) give China high marks, fewer than half in Argentina (45%) and Mexico (39%) offer favorable opinions of the Asian superpower. 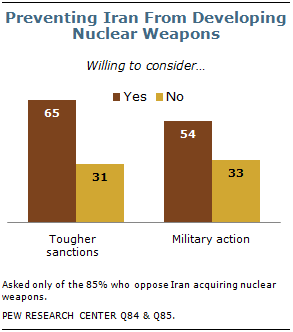 While Brazilians express confidence in Lula’s overall approach to world affairs, they largely disagree with him on how to handle Iran and its nuclear weapons program. The president has opposed additional international economic sanctions against the Islamic Republic. Yet, of the 85% of Brazilians who oppose Iran acquiring nuclear weapons, nearly two-thirds approve of tighter sanctions to try to prevent it from developing such weapons; 31% oppose tougher economic sanctions against Iran.1 Majorities of those who oppose a nuclear-armed Tehran in 18 of the other 21 countries surveyed also endorse such a measure.

In addition, most (54%) Brazilians who do not want to see a nuclear-armed Iran are willing to consider the use of military force to prevent Iran from developing nuclear weapons; a third say avoiding a military conflict with Iran, even if it means it may develop these weapons, should be the priority.

Overall, Brazilian views of Iran are among the most negative of the 22 publics included in the 2010 Pew Global Attitudes survey. About two-thirds (65%) express unfavorable opinions of Iran; a similar percentage of Americans (67%) and Egyptians (66%) offer similarly negative views, as do more than seven-in-ten in Spain, Japan, France and Germany.

Next: Chapter 1. Views of National Conditions and the Economy
← Prev Page
You are reading page1Page2Page3Page4Page5Page6Page7
Next Page →

Brazilians Upbeat About Their Country, Despite Its Problems
OverviewPositive Views of U.S. and China TooIran’s Nuclear Weapons ProgramAlso of Note
Chapter 1. Views of National Conditions and the Economy Chapter 2. Ratings of Lula and Key Groups and Institutions Chapter 3. Brazil and the World Chapter 4. Gender Issues Chapter 5. Environmental Issues Survey Methods