Over the last few decades, Brazil has confronted a number of major environmental challenges, such as the rapid deforestation of the Amazon. The survey finds that Brazilians overwhelmingly believe that protecting the environment should be a priority, even if it leads to slower economic growth or job loss. In addition, Brazilians are the most likely of the 22 publics included in the 2010 Pew Global Attitudes survey to see the problem of climate change as very serious. However, when it comes to personal choices, Brazilians are divided as to whether people should be willing to pay higher prices in order to address the issue of global climate change. 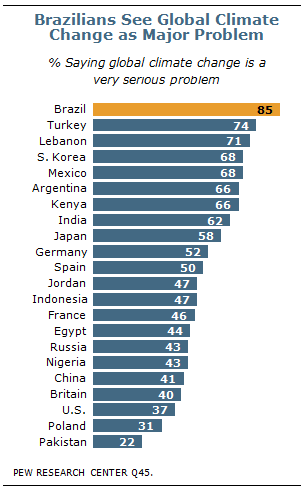 Concerns about climate change are also much higher in Brazil than in the other nations often referred to as the BRIC countries. About four-in-ten in China (41%) and Russia (43%), and 62% in India, say climate change is a very serious problem. Just 37% hold this view in the United States, which, along with China, emits more greenhouse gases than any other country in the world. 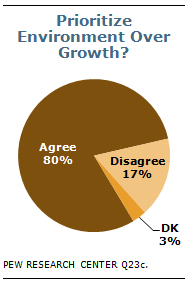 More people with a college education (93%) completely or mostly agree with giving the environment priority over economic growth than those with a secondary or a primary education (81% and 74%, respectively).

While Brazilians express serious concerns about global climate change and see protecting the environment as a priority, a much smaller number (49%) agree that people should be willing to pay higher prices in order to address global climate change, while nearly the same percentage disagrees (45%). On this question, Brazil is near the middle of the global pack, ranking 10th among the 22 nations surveyed in terms of willingness to pay higher prices. Those in China and India are the most willing to pay more in order to cope with climate change (91% and 73%, respectively). Publics in the two other Latin American countries polled are less likely than Brazilians to say they would be willing to pay more; 38% in Argentina and 32% in Mexico say that is the case. 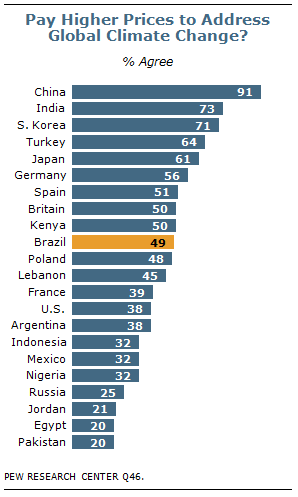 About six-in-ten Brazilians with some college or more (59%) think that people should pay more to address climate change, while only 48% with some secondary and 46% with a primary education or less agree. Similarly, 62% of high income respondents agree that people should be willing to pay higher prices, while only 47% and 46% of middle and low income groups, respectively, concur.

Even among Brazilians who say climate change is a very serious problem, only 52% agree that people should be willing to pay more to address climate change, while more than four-in-ten (43%) disagree. Likewise, 52% of those who say that protecting the environment should be given priority over economic growth are willing to pay higher prices, while 44% are not.