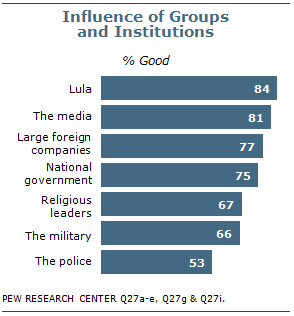 Solid majorities also describe large companies from other countries, the media, religious leaders, and the military as having a good influence. The police receive the least favorable ratings of the groups tested; a slim majority says the police are having a positive effect on the way things are going in Brazil. 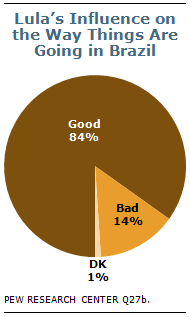 More than eight-in-ten (84%) Brazilians describe Lula’s influence as good. Just 14% say the outgoing president is having a negative impact on the way things are going in the country. Lula’s influence is seen as positive among those in all demographic and regional groups, but respondents with lower incomes and lower levels of education, as well as those in the Northeast, give the president particularly good ratings.

Nine-in-ten respondents with monthly household incomes of R$600 or less say Lula is having a good influence on the way things are going in Brazil, and a similar percentage (87%) of those in the middle income range share this view. A solid but smaller majority of those with monthly household incomes above R$2000 offer positive views of the president’s influence; 73% say it is good. Similarly, 88% of those with a primary school education or less describe Lula’s impact on the country positively, compared with 79% of those who attended college.

Respondents in the Northeast region give the president better ratings than those in other regions, although Lula is popular across the country. More than nine-in-ten (95%) in that region say he is having a good influence on the way things are going in Brazil; by comparison, in the Southeast, where Lula gets his lowest ratings, 78% say the president is having a positive impact. 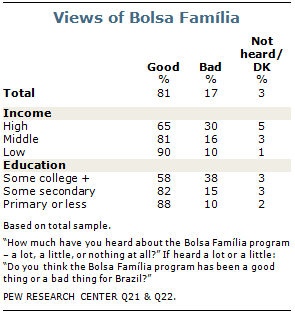 Brazilians strongly endorse Bolsa Família, Lula’s flagship initiative which many credit with reducing poverty in Brazil since its inception in 2003. About eight-in-ten (81%) say the program has been good for the country. Fewer than one-in-five (17%) think the cash-transfer program has been bad for Brazil; just 1% said they had never heard of Bolsa Família.

Majorities across all demographic groups support the Bolsa Família program, but the initiative is especially popular among those with less education and lower incomes. For example, nine-in-ten of those with monthly household incomes of R$600 or less say the program has been a good thing for Brazil; 81% of those in the middle income and considerably fewer (65%) of those with monthly household incomes higher than R$2000 share this positive assessment of Bolsa Família.

Bolsa Família also receives more support among those in rural areas, where the decline in the poverty rate has been most apparent in recent years, according to Brazil’s Institute for Applied Economic Research (IPEA). Nearly all (97%) respondents in rural areas say the program has been good for their country. Support is also widespread, but less so, among urban dwellers; 79% say Bolsa Família has been good for Brazil and 18% say it has been bad.

Not surprisingly, Lula’s supporters are especially enthusiastic about the president’s signature program. Fully 85% of those who see Lula as having a positive influence on the way things are going in Brazil say Bolsa Família has been good for their country; just 13% say it has been bad. By comparison, 57% of those who express negative views of Lula endorse the Bolsa Família program and 36% do not. 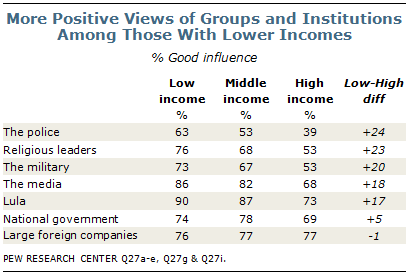 Brazilians give the media high marks; 81% say it is having a good influence on the way things are going in the country. About three-quarters also say large companies from other countries and the national government are having a positive impact on the country (77% and 75%, respectively), and about two-thirds are satisfied with the influence of religious leaders (67%) and the military (66%). The police receive more mixed ratings. A slim majority (53%) says the police have a good impact on the country; 45% give the police negative reviews.

Opinions about the impact the president and various groups and institutions are having on Brazil are consistently more positive among those with less education and lower income, and, to some extent, among those in rural areas. For example, 63% in the low income group think the police are having a good influence. In contrast, just 39% of those in the high income group share that view, while a majority (61%) says the police are having a negative influence on the country.

Low income respondents are also more likely than the more affluent to say religious leaders, the military, the media, and the president have a positive effect on the country. Similar differences are evident across educational groups, with those with a primary education or less much more likely than those who have attended college to see the president and key groups and institutions in a positive light.

Religious leaders, the police, the military and the media also receive more positive ratings in rural than in urban areas. For example, while about seven-in-ten (69%) of those who live in rural areas say the police are having a good influence on the way things are going, those in urban areas are divided, with 51% saying the police have a good impact and 47% saying they have a bad impact on the country. And while clear majorities among both groups offer positive views of religious leaders, the military and the media, those in rural areas are more upbeat in their assessments.

Next: Chapter 3. Brazil and the World
← Prev Page
Page1Page2You are reading page3Page4Page5Page6Page7
Next Page →

Brazilians Upbeat About Their Country, Despite Its Problems Chapter 1. Views of National Conditions and the Economy
Chapter 2. Ratings of Lula and Key Groups and Institutions
Lula’s Positive RatingsWidespread Support for Bolsa FamíliaViews of Groups and Institutions
Chapter 3. Brazil and the World Chapter 4. Gender Issues Chapter 5. Environmental Issues Survey Methods