An overwhelming majority of Brazilians gives the government good ratings for the way it is handling the economy, and many expect economic conditions to improve over the next year. Yet, a large percentage of those who say the country’s current economic situation is bad blames the government primarily; many also say Brazilians themselves are responsible for the country’s economic troubles. 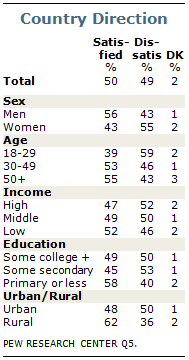 Brazilian men are considerably more likely than women in that country to say they are satisfied with the way things are going; 56% of men offer a positive assessment of national conditions, compared with 43% of women. 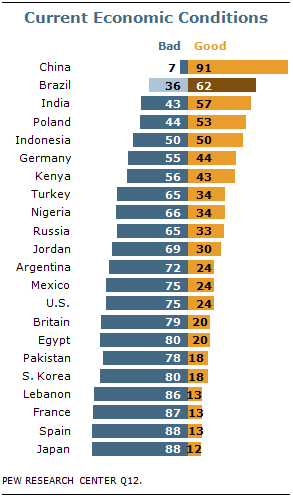 Of the 22 publics surveyed, Brazilians offer the second-most positive evaluations of economic conditions in their country. A solid majority (62%) describes the current economic situation in Brazil as very or somewhat good, while just 36% say the economy is bad. China, where 91% rate their country’s economy as good, is the only country where views are more positive than those of Brazilians. Majorities in 17 of the 22 nations surveyed say their countries’ economies are in bad shape.

Men and those with at least some college education give Brazil’s economy particularly high marks. While nearly seven-in-ten (69%) men say economic conditions are good, a narrower majority of women (56%) share this view. Among respondents who have attended college, 70% give the economy a positive rating, compared with 62% of those with some secondary education and 59% of those with a primary education or less.

Ratings of economic conditions do not vary significantly across income or age groups.2 Respondents in all regions also offer similar evaluations of Brazil’s economy, as do those in urban and rural areas.

Government’s Handling of the Economy 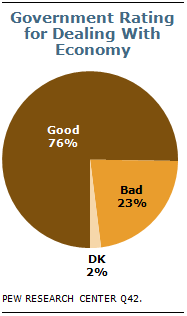 Of those who think the economy is in bad shape, an overwhelming majority (80%) blames the government for their country’s economic problems. More than half (55%) say Brazilians themselves are among the top culprits, while 26% blame banks and other financial institutions for Brazil’s economic troubles. Few name the U.S. (5%) or the European Union (2%).

Still, a solid majority of Brazilians (76%) give their government a good rating for its handling of the economy; just 23% say the government is doing a bad job. This view is prevalent across demographic groups and regions.

Most Say Economy Will Improve 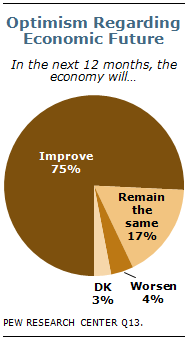 Brazilians are optimistic about their short-term economic future. Three-quarters say they expect their country’s economic situation to improve over the next year. Just 4% say the economy will worsen, while 17% expect it to remain the same.

Among those who rate the current economic situation positively, 80% expect it to be even better in the next year, while 16% expect it to remain the same; just 2% say things will get worse. Optimism is less widespread among those who say the economy is currently in bad shape; still, 68% in that group expect economic conditions to improve in the next year, while 21% say things will remain the same and 9% think the economy will worsen.

Views of Trade and Globalization 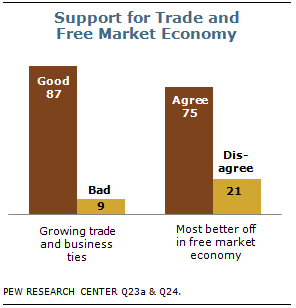 An overwhelming majority of Brazilians (87%) say that growing trade and business ties between Brazil and other countries is a good thing. This view is widespread across demographic groups and regions, but those with some college education and the more affluent, as well as those in urban areas, are somewhat more likely than the less educated, those with lower incomes, and those in rural parts of the country to say growing trade is good for Brazil. 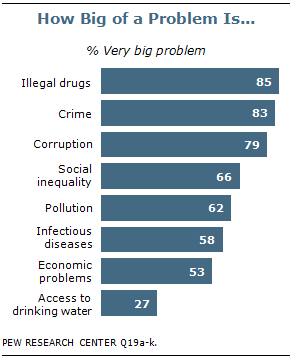 For the most part, views of national problems vary little, if at all, across demographic groups. However, those in rural areas are often more likely than those in urban areas to characterize Brazil’s challenges as major. For example, 75% of respondents in rural parts of the country describe the spread of infectious diseases as a very big problem, compared with 56% of those in urban areas. And while about three-quarters (74%) in rural areas say pollution is a major problem, 60% in urban areas share this opinion. 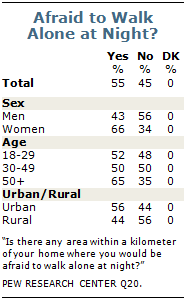 More than half of Brazilians (55%) say there are areas within a kilometer of their home where they would be afraid to walk alone at night; 45% say they feel safe walking alone in their neighborhood. Women, those over 50 and those who live in urban areas are especially likely to feel unsafe.

About two-thirds (66%) of women say there are areas near their homes where they would be afraid to walk alone at night, compared with 43% of men who say that is the case.

Among those 50 and older, 65% say there are areas within a kilometer of their homes where they would be afraid to walk alone at night. By contrast, half of those ages 30 to 49 and about the same share of those younger than 30 (52%) feel unsafe in their neighborhoods.

And while solid majorities of urban and rural dwellers describe crime as a very big problem in Brazil (83% and 87%, respectively), those who live in urban areas are more likely to feel personally unsafe. More than half (56%) of respondents who live in urban areas say there are parts of their neighborhood where they would be afraid to walk alone at night; 44% of those in rural areas say that is the case.

Next: Chapter 2. Ratings of Lula and Key Groups and Institutions
← Prev Page
Page1You are reading page2Page3Page4Page5Page6Page7
Next Page →

Brazilians Upbeat About Their Country, Despite Its Problems
Chapter 1. Views of National Conditions and the Economy
Mixed Views of National ConditionsNational Economy Gets Good RatingsGovernment’s Handling of the EconomyMost Say Economy Will ImproveViews of Trade and GlobalizationDrugs, Crime Top ConcernsFear of Crime
Chapter 2. Ratings of Lula and Key Groups and Institutions Chapter 3. Brazil and the World Chapter 4. Gender Issues Chapter 5. Environmental Issues Survey Methods