Brazilians are confident and optimistic about their country’s role on the world stage. A large majority believe that Brazil is either already one of the world’s most powerful nations or that it will be eventually. And overwhelmingly, Brazilians think their country has a positive international image.

Most Brazilians express confidence in the foreign policy skills of President Lula – about eight-in-ten say he generally does the right thing in world affairs. U.S. President Barack Obama also receives largely positive reviews. The other international leaders tested do not fare as well, especially Venezuelan President Hugo Chavez, who is widely unpopular.

Both the United States and China have generally positive images in Brazil. Most Brazilians have favorable opinions of both countries and tend to consider them partners to Brazil. However, ratings for the U.S. are slightly higher than those for China. 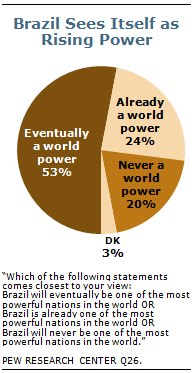 Views on this issue are linked to views about Lula. Among those who believe the president is having a positive influence on the country, 26% say Brazil is already one of the most powerful nations, while just 12% of those who think Lula is having a negative impact feel this way.

Brazilians also have an upbeat view of how their country is perceived abroad. Eight-in-ten believe people in other countries around the world generally like Brazil, while only 18% say Brazil is generally disliked. 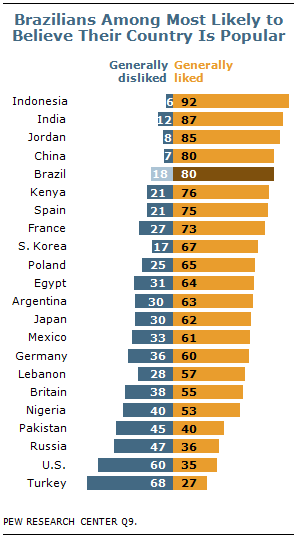 Among the 22 countries included in the spring 2010 Pew Global Attitudes survey, Brazilians are among the most likely to think their country is well-regarded by others around the globe. By contrast, Americans are among the least likely to hold this view – just 35% think the U.S. enjoys international popularity.

While the poll did not examine global perceptions of Brazil, it did find that Brazil is quite popular in neighboring Argentina. Roughly seven-in-ten Argentines (69%) have a favorable opinion of Brazil, up sharply from 2007, when 47% expressed a positive view.

Over this same time period, however, Mexicans have become less likely to give Brazil a favorable rating: 48% had a positive view in 2007, compared with 41% today. The share of Mexicans who do not have an opinion of Brazil has grown from 24% in 2007 to 39% now.

Overwhelmingly, Brazilians approve of how Lula handles foreign policy. When asked how much confidence they have in Lula to do the right thing in world affairs, 78% say they have a lot or some confidence, while just 21% say they have not too much or no confidence.

Among the international leaders tested, Obama is the only figure to receive a positive rating from a majority of Brazilians: 56% say they think the U.S. president will do the right thing in world affairs. 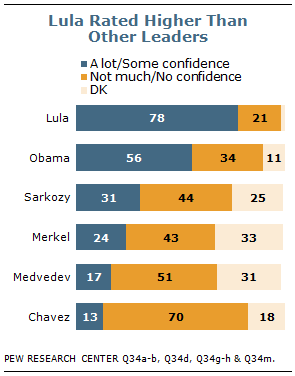 On balance, the Brazilian public takes a negative view of the other four leaders included in the survey. About three-in-ten (31%) express confidence in French President Nicolas Sarkozy, while 44% do not have confidence in him. Only 24% voice confidence in German Chancellor Angela Merkel; 43% give her a negative rating. Russian President

Dmitri Medvedev fares even worse: 17% think he will do the right thing in international affairs, while 51% disagree.

The leader receiving the most negative ratings, however, is Venezuelan President Hugo Chavez. Just 13% of Brazilians voice confidence in Chavez, while seven-in-ten have little or no confidence in the Venezuelan leader. 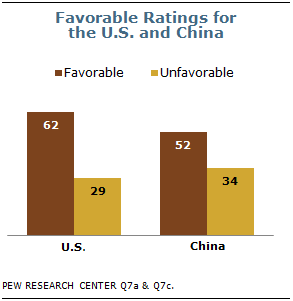 America’s image is slightly more positive than China’s among Brazilians, although both of these major powers tend to receive favorable ratings. About six-in-ten (62%) Brazilians have a positive opinion of the U.S., while just 29% express a negative view. Roughly half (52%) give China a favorable rating, while 34% have an unfavorable opinion. 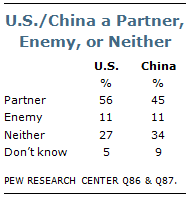 Most Brazilians (56%) consider the U.S. a partner to their country, while only 11% regard it as an enemy. Somewhat fewer see China as a partner (45%), although as is the case with the U.S., just 11% say China is an enemy.

Iran and Its Nuclear Program

Earlier this year, Lula and Turkish Prime Minister Recep Tayyip Edrogan attempted to negotiate an agreement with Iran that would have averted international economic sanctions against the Islamic Republic.3 However, despite Lula’s diplomatic stance, the survey finds that Brazilians widely support the idea of tighter economic sanctions in order to prevent Iran from acquiring nuclear weapons, and many would also consider military action against Iran.

Overall, Iran has a negative image in Brazil. Nearly two-thirds (65%) have an unfavorable opinion of Iran, while just 18% hold a favorable view. Fully 85% of Brazilians oppose Iran acquiring nuclear weapons; only 5% support this idea. Among those who oppose a nuclear-armed Iran, 65% say they would approve of tougher international sanctions; 31% would disapprove.

Brazilians Upbeat About Their Country, Despite Its Problems Chapter 1. Views of National Conditions and the Economy Chapter 2. Ratings of Lula and Key Groups and Institutions
Chapter 3. Brazil and the World
Brazil’s Role in International AffairsRating International LeadersViews of the U.S. and ChinaIran and Its Nuclear Program
Chapter 4. Gender Issues Chapter 5. Environmental Issues Survey Methods