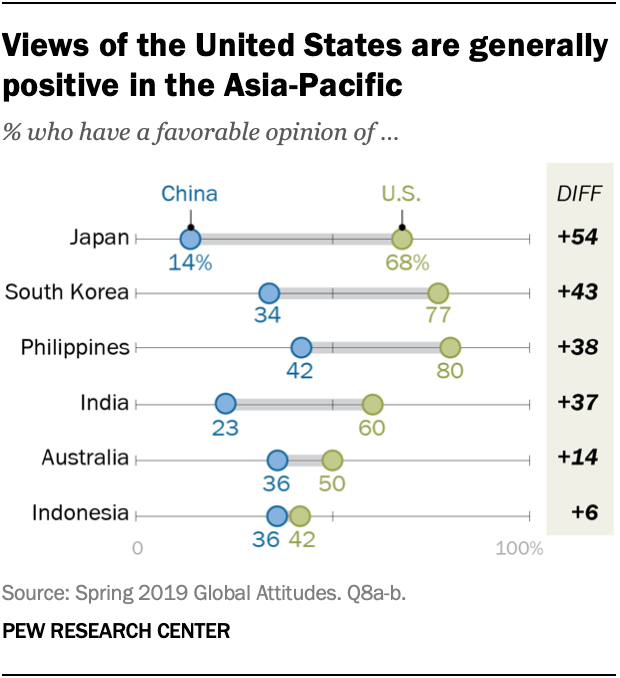 The United States and China have long been locked in competition over their standings as economic and world powers. And, in a region where this competition hits close to home, views of the U.S. remain strongly favorable when compared with those of China in the Asia-Pacific.

Across the six Asia-Pacific nations surveyed by Pew Research Center between May 18 and Oct. 2, 2019, a median of 64% have favorable views of the U.S. Positive sentiments are highest in the Philippines and South Korea, with about eight-in-ten respondents holding favorable opinions (80% and 77%, respectively).

However, these positive views do not extend to President Donald Trump, who receives significantly lower ratings than his predecessor in all six Asia-Pacific nations in the survey.

This analysis focuses on views of the U.S. and American President Donald Trump in the Asia-Pacific. The six countries included are Australia, India, Indonesia, Japan, the Philippines and South Korea.

We used data from a survey of 9,281 adults conducted across seven countries from May 13 to Oct. 2, 2019. The surveys were conducted on the phone in Australia, Japan, South Korea and the United States and face-to-face in India, Indonesia and the Philippines.

Here are the questions used (Excel) for this report, along with responses, and its methodology.

Many among Asian publics name the U.S. as their top ally. Majorities in South Korea (71%), the Philippines (64%) and Japan (63%) say their country can most rely on the U.S. as a dependable ally in the future. Many in Australia, India and Indonesia also name the U.S. as a reliable partner. In contrast, Americans tend to name countries like the UK, Canada and Israel as the top partners for the U.S. Only 1% of respondents or fewer in the U.S. listed each of the six Asia-Pacific countries surveyed as their top ally.

Compared with views of the U.S., opinions of China in the Asia-Pacific are negative. Majorities in Japan (85%), South Korea (63%) and Australia (57%) express an unfavorable opinion of the neighboring power. And around half in the Philippines (54%) and India (46%) say the same. 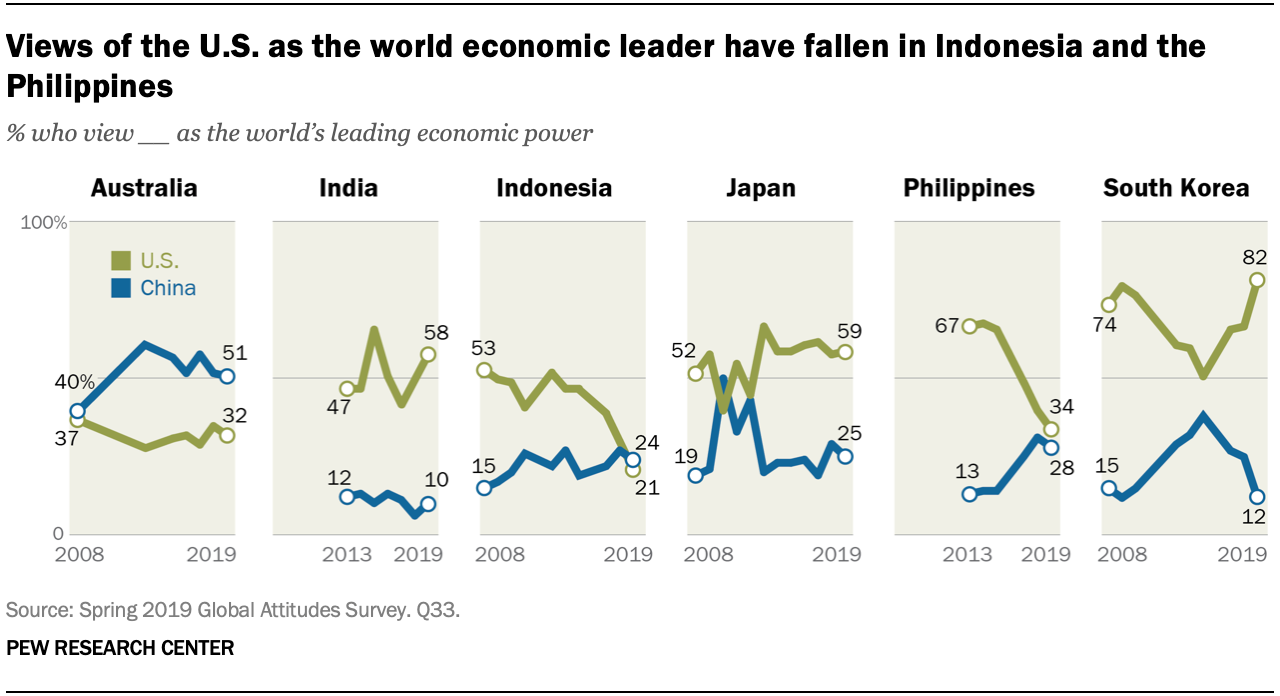 Despite declining views of U.S. economic preeminence, people in four of the six countries surveyed say it is more important for their country to have strong economic ties with the U.S. than with China. In Japan, for example, 70% say they prefer a stronger economic relationship with the United States. Majorities in the Philippines, South Korea and India share this sentiment. Indonesians and Australians are split; similar shares name China and the U.S. in both nations. While many see China playing a more important role in the world today compared with 10 years ago, a median of 64% in the region still prefer a robust American economic partnership over a Chinese one.

Confidence in Trump continues to lag in the region 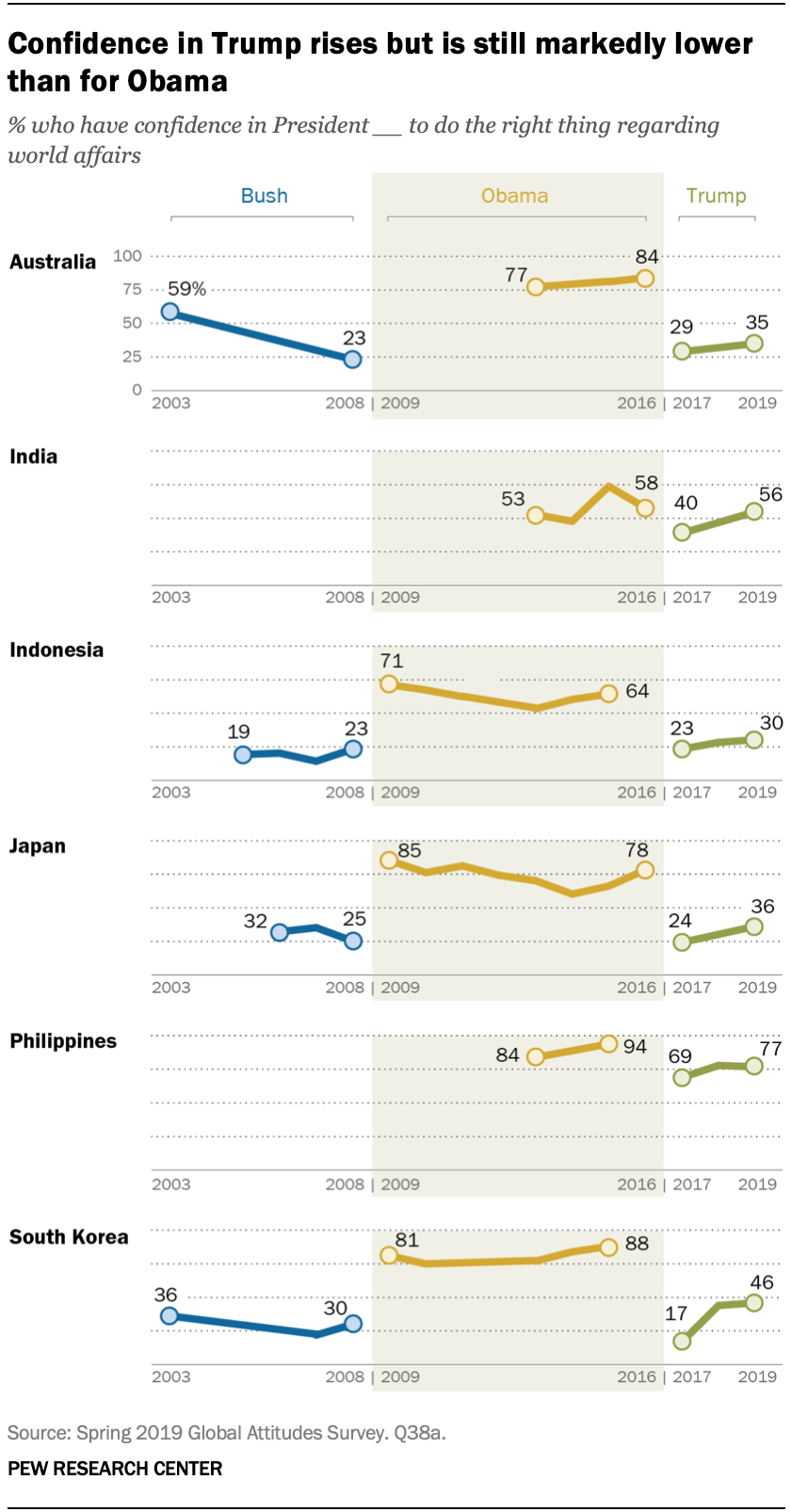 Trump’s ratings are significantly lower than the most recent ones of his predecessor, Barack Obama, in Australia (by 49 percentage points), Japan (42), South Korea (42), Indonesia (34) and the Philippines (17). The exception is India, where ratings for Trump are similar to what Obama received near the end of his second term in office.

Gender is a factor in evaluations of Trump for some countries in the region. Men are significantly more likely than women to have confidence in the U.S. leader to do the right thing regarding world affairs. Double-digit gender differences exist in Australia, Japan and South Korea.

Trump fares better when it comes to his nuclear negotiations with North Korean leader Kim Jong Un. Roughly four-in-five in Japan and South Korea approve of Trump’s diplomacy with North Korea (80% and 78% respectively). Conversely, fewer than one-in-three in the Philippines, Indonesia and India approve of these dealings with Kim. (Trump’s approach to North Korea was the only one of his major foreign policy positions tested among 33 nations around the world that was viewed favorably on balance, with a median of 41% approving and 36% disapproving.)

In South Korea, opinions of these negotiations showed an ideological divide. While 90% on the left approve of Trump’s negotiations, fewer on the right (71%) share the same sentiment. This is the opposite of the ideological divide on confidence in Trump in general: 58% of South Koreans on the right express confidence in him, compared with just 28% of those on the left.

Note: Here are the questions used (Excel) for this report, along with responses, and its methodology.

Correction: A previous version of this post misidentified the view in South Korea of whether the U.S. is the world’s leading economic power. The headline of the second chart has been updated accordingly.