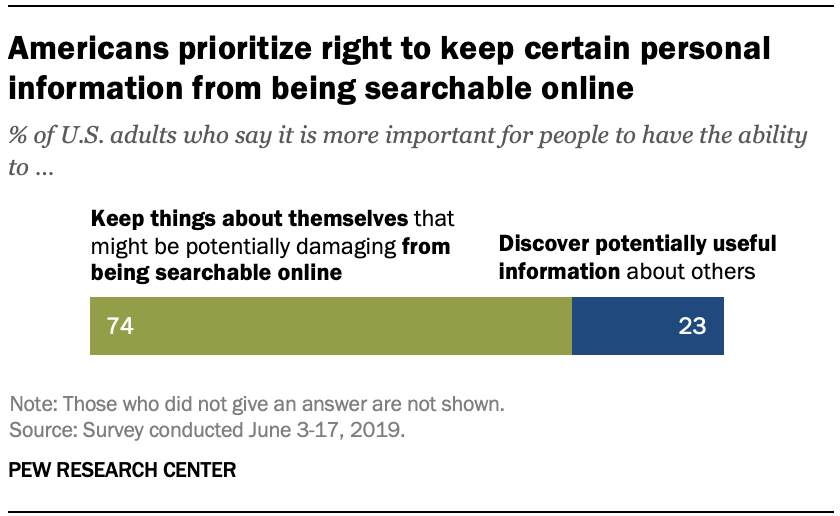 The ability to keep personal information from being searchable online is at the crux of the debate around the “right to be forgotten” – a term that first gained attention in 2014 when the European Court of Justice ruled against the search engine giant Google in a high-profile privacy case. The court declared that under certain circumstances, European Union residents could have personal information removed or deleted from search results and public records databases. To date, Google reports that it has received more than 880,000 individual delisting requests from EU residents.

More recently, a September 2019 ruling by the EU court found that Google does not have to apply the “right to be forgotten” outside Europe. Indeed, the United States has no law or regulatory requirement about removal of personal information from search results or databases. Several states have considered “right to be forgotten” laws, but none have adopted provisions like the EU court’s ruling.

The Center’s survey finds that large majorities across demographic groups say it is more important to be able to keep things about themselves from being searchable online than to be able to discover potentially useful information about others.

For this report, we surveyed 4,272 U.S. adults in June 2019. Everyone who took part is a member of Pew Research Center’s American Trends Panel (ATP), an online survey panel that is recruited through national, random sampling of residential addresses. Recruiting our panelists by phone or mail ensures that nearly all U.S. adults have a chance of selection. This gives us confidence that any sample can represent the whole population (see our Methods 101 explainer on random sampling). 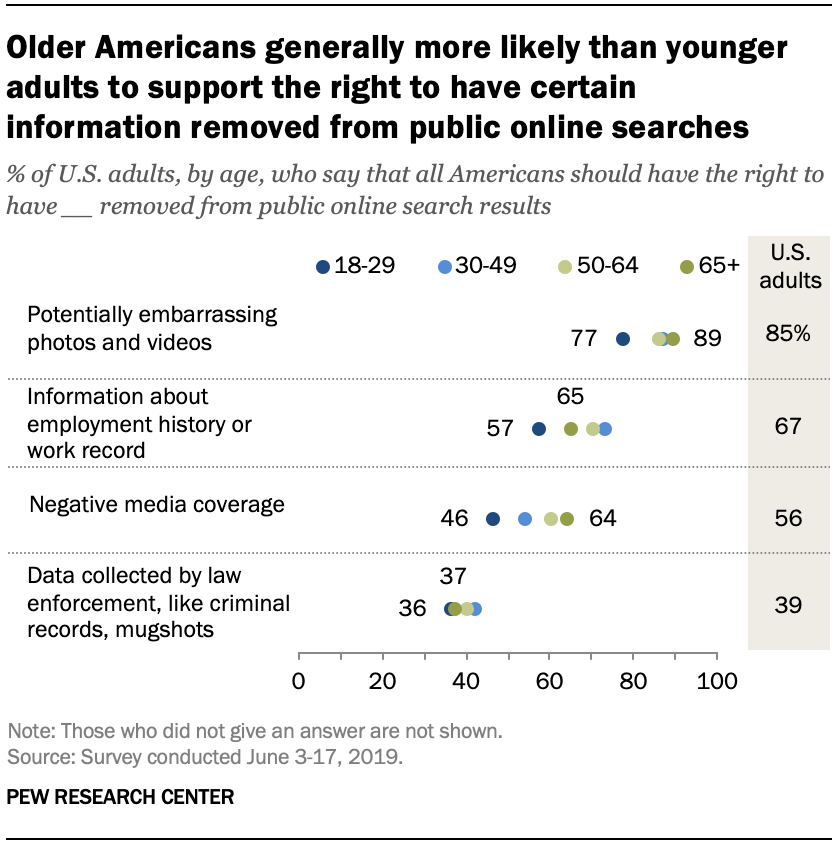 The survey also finds mixed public attitudes about whether specific kinds of information should be excluded from search results. An overwhelming majority of U.S. adults (85%) believe that all Americans should have the right to have potentially embarrassing photos and videos removed from public online search results. About two-thirds (67%) say this should be a right for all Americans when it comes to information about employment history or work records, and more than half (56%) say all Americans should have the right to have negative media coverage about themselves removed from public search results.

A smaller share of Americans – though still about four-in-ten (39%) – think the same right should be applied to data collected by law enforcement, such as criminal records or mugshots.

Public opinion on whether Americans should be allowed to remove negative media coverage and potentially embarrassing photos and videos varies widely by age. For example, 64% of those ages 65 and older say all Americans should have the right to have negative media coverage removed from online searches, compared with 46% of those ages 18 to 29. When it comes to potentially embarrassing photos and videos, 77% of 18- to 29-year-olds say people should be able to remove this data from public search, with a larger share – 89% – of those 65 and older sharing this sentiment. A gap exists between adults under the age of 30 and those 30 and older on the subject of employment information, with those in the older age group being more likely to favor having the right to have such data removed.

When it comes to data collected by law enforcement – like criminal records and mugshots – some groups are more likely than others to say they think the removal of such information from search results should be a right for all Americans. Men are more likely than women to say this (47% vs. 32%), as are black Americans (44%) when compared with white (39%) and Hispanic adults (33%). 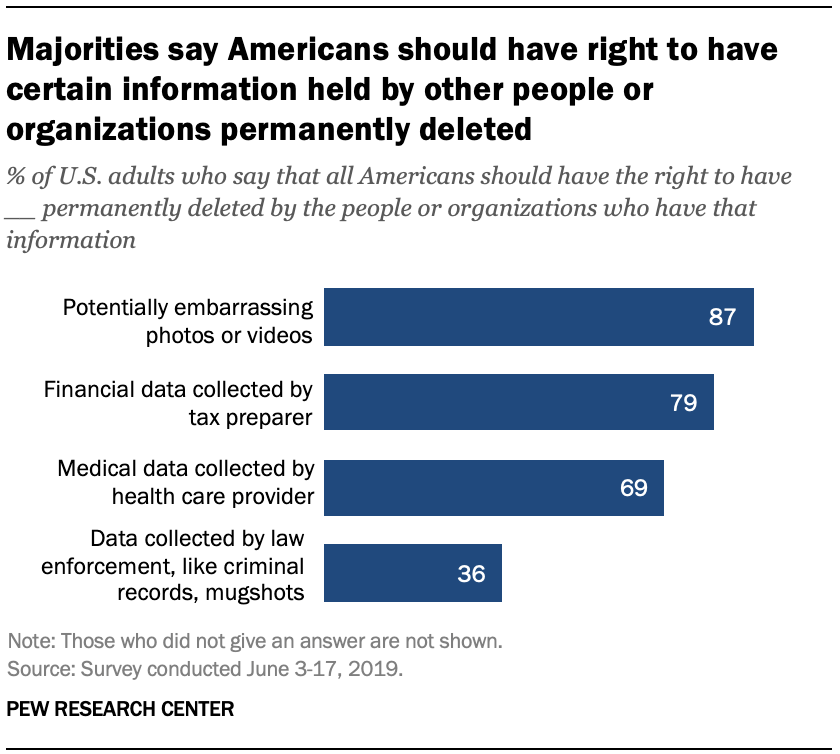 Beyond the issue of what should be available in online search results, the survey explored whether Americans believe everyone should have the right to have certain personal data about themselves permanently deleted by the people and organizations who have it.

Nearly nine-in-ten Americans (87%) agree with this idea when it comes to potentially embarrassing photos and videos. Majorities also think Americans should have a right to have personal financial data collected by a tax preparer (79%) and personal medical data collected by a health care provider (69%) deleted by the organization or person who holds the information. Far fewer (36%) think personal data collected by law enforcement – like criminal records or mugshots – should be able to be deleted, which tracks with the findings around the removal of such data from public online search results. 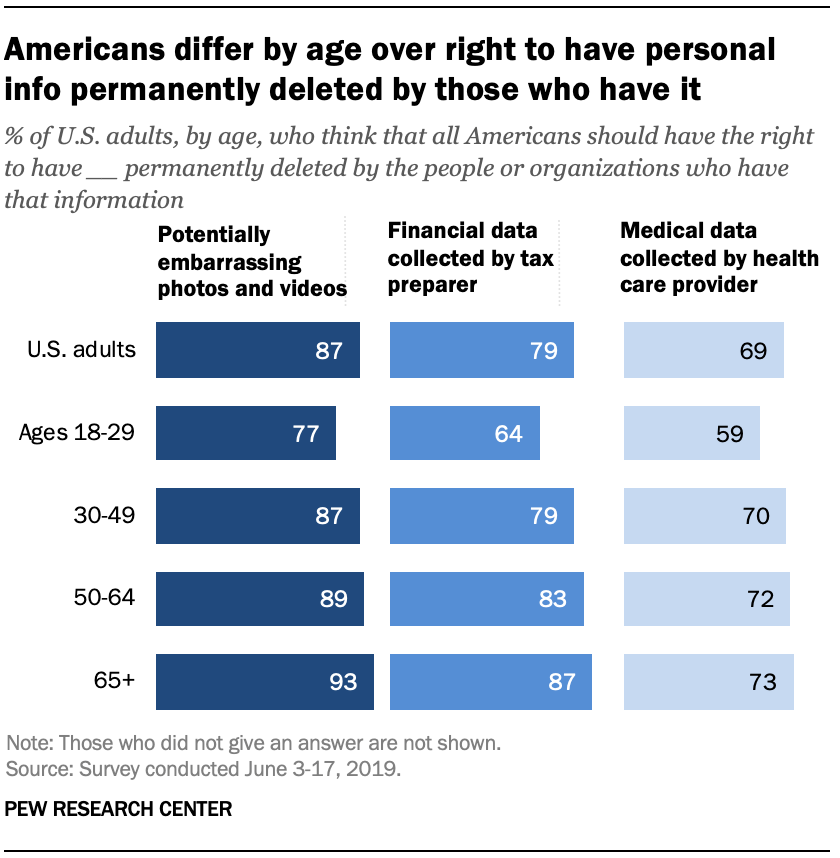 Across several of these types of information, white Americans, older adults, those with higher annual household incomes and those higher levels of educational attainment are more likely to say all Americans should have the right to have their personal information deleted. However, when it comes to views about data collected by law enforcement, black adults (47%) and Hispanic Americans (45%) are more likely than white adults (32%) to say the deletion of such information should be a right for all Americans.

There are also differences by political party across two information types. Democrats and independents who lean to the Democratic Party are more likely than Republicans and Republican leaners (41% vs. 30%) to say all Americans should have the right to have data collected by law enforcement permanently deleted.

At the same time, Republicans and Republican leaners are a bit more likely than Democrats and Democratic leaners to say all Americans should be able to have financial data collected by their tax preparer permanently deleted (83% vs. 77%).