The European Union’s overall unemployment rate is now at its lowest point since before the continent’s financial crisis began. But high unemployment remains a reality in several EU nations, and a growing share of new jobs in Europe are temporary, part-time or self-employed positions. 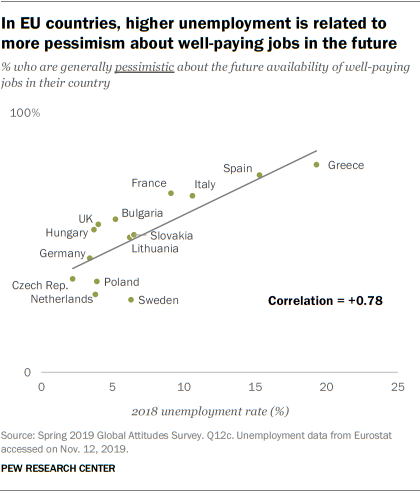 Against this backdrop, a new Pew Research Center analysis finds that people in EU nations with higher unemployment rates tend to voice more pessimism about future job prospects in their country. The analysis also finds that youth unemployment rates, as well as changes in a country’s gross domestic product, are linked to economic attitudes in EU member states.

Across 14 EU nations surveyed by the Center this year, a median of 54% of adults say they are pessimistic about the future availability of well-paying jobs in their country, ranging from just 28% who say this in Sweden to 76% in Spain and 80% in Greece.

These attitudes are connected with current economic conditions. The unemployment rate in Greece sat at 19.3% in 2018 – the highest in the EU, though down from its peak of 27.5% in 2013 – while Spain had a rate of 15.3% in 2018. By comparison, the unemployment rate was much lower in Sweden (6.3%) than in Greece and Spain, perhaps explaining why Swedes are less pessimistic about the future availability of well-paying jobs in their country.

How unemployment rates are determined in EU nations

The unemployment rate is the number of people unemployed as a percentage of the total labor force.

“Youth unemployment” refers to the same guidelines as above but is limited to persons ages 15 to 24. 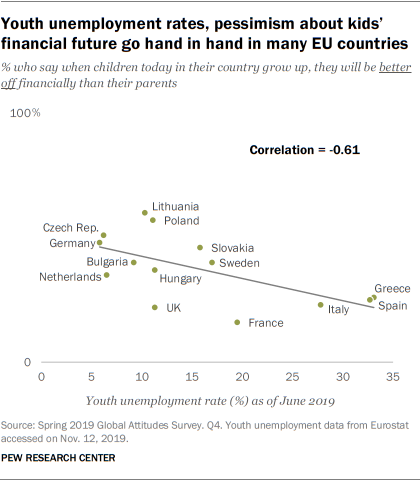 Unemployment rates are also connected with how people in Europe view the economic prospects of the next generation. And youth unemployment in particular relates to people’s views of whether children today will be better off financially than their parents.

Eurostat, the statistical arm of the European Commission, defines youth unemployment as the percentage of young people ages 15 to 24 who are eligible to work and are actively searching for a job but cannot find one. It’s not unusual for youth unemployment rates to eclipse a country’s general unemployment rate, and in countries like Greece, Spain and Italy, the youth unemployment rate ranged from 28% to 33% in mid-2019 when the Center’s survey was fielded. In these three nations, only about a quarter of adults believe that when children in their country grow up, they will be better off financially than their parents. At the other end of the spectrum, people in the Czech Republic and Germany – where youth unemployment is much lower – are more optimistic about the financial prospects of the next generation.

This pattern is not uniformly the case, however. People in France and the UK stand out for being much less optimistic than their counterparts in nations with similar youth unemployment rates. French and British adults, in fact, are about as pessimistic about the financial future of the next generation as people in Italy, Spain and Greece – even though France and the UK have youth unemployment rates that are roughly 10 to 20 percentage points lower. 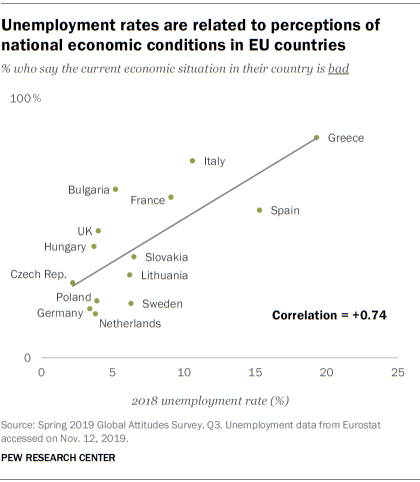 Overall, the European nations surveyed generally tend to be pessimistic on this question. Only in three countries (Lithuania, Poland and the Czech Republic) does even half the public say children today will be better off financially than their parents.

The Center’s analysis also finds that attitudes toward one’s national economy and the actual unemployment rate for the entire working-age population share a close relationship. People in Germany and the Netherlands, for example, are the least likely to think their national economic situations are bad, and these nations also have low unemployment rates of 3.4% and 3.8%, respectively. On the opposite end of the spectrum is Greece, where 85% of adults say the nation’s economy is bad and nearly one-in-five are unemployed.

It should be noted that unemployment may not take into account other factors that could lead to negative economic attitudes. For instance, more than 5% of the employed working-age population in Spain, Greece and France were underemployed part-time workers in 2018. Likewise, roughly 2% of people ages 15 to 74 in the EU were available for work in 2018 but not actively seeking employment, which would exclude them from the overall unemployment count. 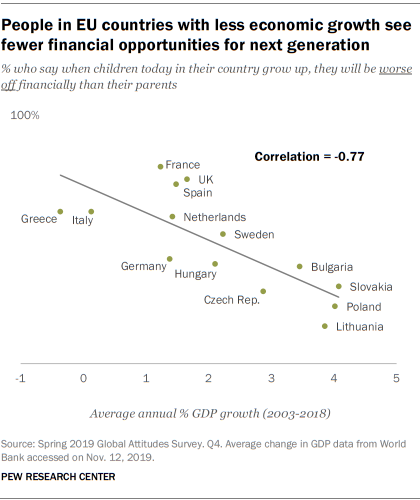 Similar patterns appear when looking at average annual growth in a country’s gross domestic product over time. In countries that have seen stagnant or negative annual GDP growth over the past 15 years, people are more likely to have a pessimistic view of the financial prospects of the next generation. And the opposite is true in countries with strong annual GDP growth.

In Greece, which had negative average GDP growth between 2003 and 2018, a majority of adults (61%) believe children today will be worse off than their parents. By contrast, Poland, Slovakia and Lithuania managed to sustain an average of about 4% GDP growth per year, and in these three nations, about three-in-ten or fewer people say children will have worse economic outcomes than their parents.

Here, again, people in France and the UK are notably pessimistic. In both countries, as well as in Spain, about three-quarters of adults or more say children today will be worse off financially than their parents, even though all three countries saw average annual GDP growth rates between 1% and 2% between 2003 and 2018.

This finding aligns with previous research on this topic across the world, not just in Europe.