In recent years, considerable attention has been given to how Facebook collects and uses its users’ data. One of the ways the popular online platform collects and categorizes user data is through ad preference pages. The pages list users’ perceived interests – which are generated by the site’s algorithm – and are available for users to review their presumed hobbies, characteristics and traits. These categories, for example, might include the users’ political leanings or their cultural interests.

In a Pew Research Center survey conducted Sept. 4-Oct. 1, 2018, Facebook users were directed to open and review their own ad preference page in order to complete the survey. That survey found that roughly nine-in-ten U.S. adults who use Facebook reported that they had information compiled about them on their Facebook ad preferences page. But a new analysis of this data finds that how Facebook categorizes these users, when it comes to the number of categories and their accuracy, varies by how often someone uses the platform.

Here are key findings from that analysis: 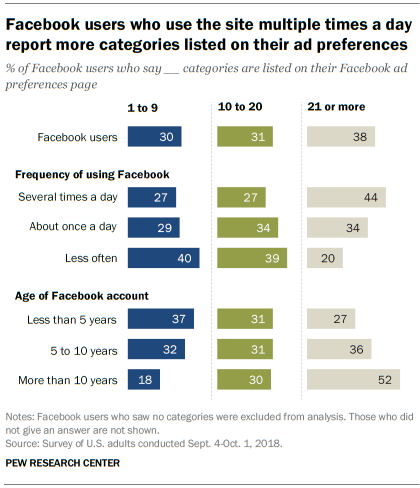 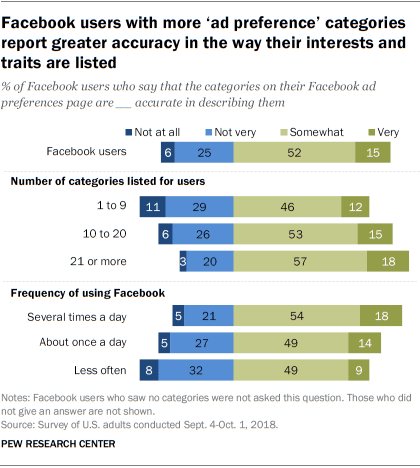 Having more categories and frequently using Facebook are associated with greater accuracy. Three-quarters of Facebook users with 21 or more categories said these categories are very or somewhat accurate. But for users reporting fewer than 10 categories shown for them, that share dropped to about six-in-ten (58%).

Similarly, adults who use Facebook multiple times a day were more likely to say that the information on the ad preferences page at least somewhat accurately represents them than people who don’t use Facebook daily (72% vs. 58%). However, fewer than 20% of users – regardless of the frequency with which they use Facebook – said the categories are “very” accurate.

There are no differences related to perceived accuracy of the assigned categories based on the age of a user’s Facebook account. Adults who have had a Facebook account for a longer period of time have provided Facebook’s algorithm with data over a longer period, but there is a possibility that older information may be less relevant when it comes to the user’s current interests. About two-thirds of adults in each group – accounts less than 5 years old (69%), 5 to 10 years (66%) and 10 or more (67%) – reported that the information is at least somewhat accurate.