The fall of the Berlin Wall 30 years ago this week brought far-reaching social and economic changes to communist East Germany, and people on both sides of the former barrier say the changes that have occurred since 1989 have had a positive influence on living standards in their country, according to a recent Pew Research Center survey. But that does not mean the former East and West Germany are on equal economic footing today.

Despite substantial improvements in recent decades, the former East Germany continues to trail the former West Germany on important economic measures ranging from unemployment to productivity, according to an annual German government report on the “status of German unity.” (The most recent version of the report, from September, is available here in German. The 2018 version of the report is available here in English.)

See also: How the attitudes of West and East Germans compare, 30 years after fall of Berlin Wall

Here is a look at how economic conditions in the former East and West Germany have changed over time, how they compare today and how people in the two areas perceive these differences. All findings are based on data from the German government’s 2019 report, as well as the Center’s recent survey. 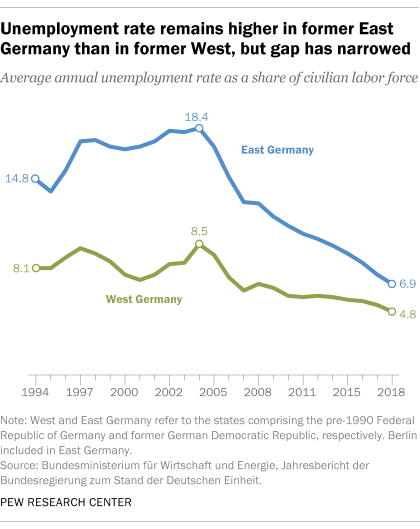 East-West differences in unemployment rates cut across demographic lines including age and gender. Among people ages 15 to 24, for example, the average unemployment rate in the former East Germany was 7.7% in 2018, compared with 4.1% in the former West. And while 7.5% of East Germans ages 55 to 64 were unemployed in 2018, the share was 5.3% among West Germans in the same age range. 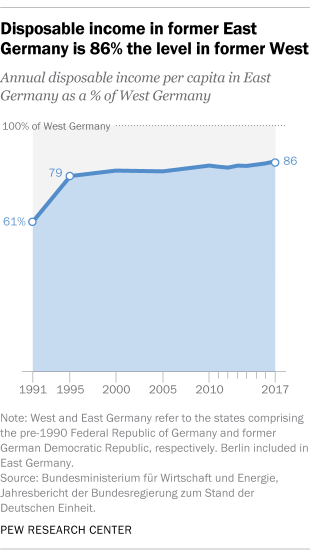 The government’s report points to several possible factors for the worse economic conditions in East Germany, including the lack of major companies headquartered there.

“Today, not a single east German company is listed on the DAX-30, the nation’s leading stock exchange index,” the report notes. “And almost no major companies have their headquarters in East Germany. Many East German businesses are part of western German or foreign corporations.” 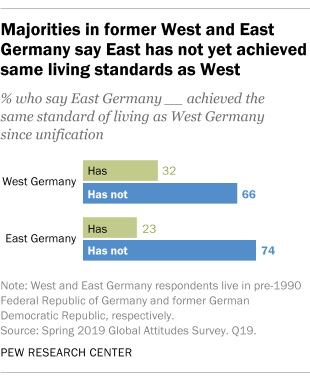 Around three-quarters of people in the former East Germany (74%) and around two-thirds of those in the former West (66%) say the East still has not achieved the same living standards as the West, according to the Center’s recent survey, which was conducted among representative samples of adults in both areas as part of a larger study of Europe.