How are American attitudes similar to or different from those measured in Europe? Are Americans more individualistic than their European counterparts? More religious? Do they value different things in politics?

Results of a new Pew Research Center survey conducted in 14 European Union member states and the United States indicate that American and European values sometimes vary when it comes to key areas affecting their lives: the factors important to democracy, evaluations of the state, LGBT rights and gender, the importance of religion and the paths to a successful life. Here is what we found in these five areas: 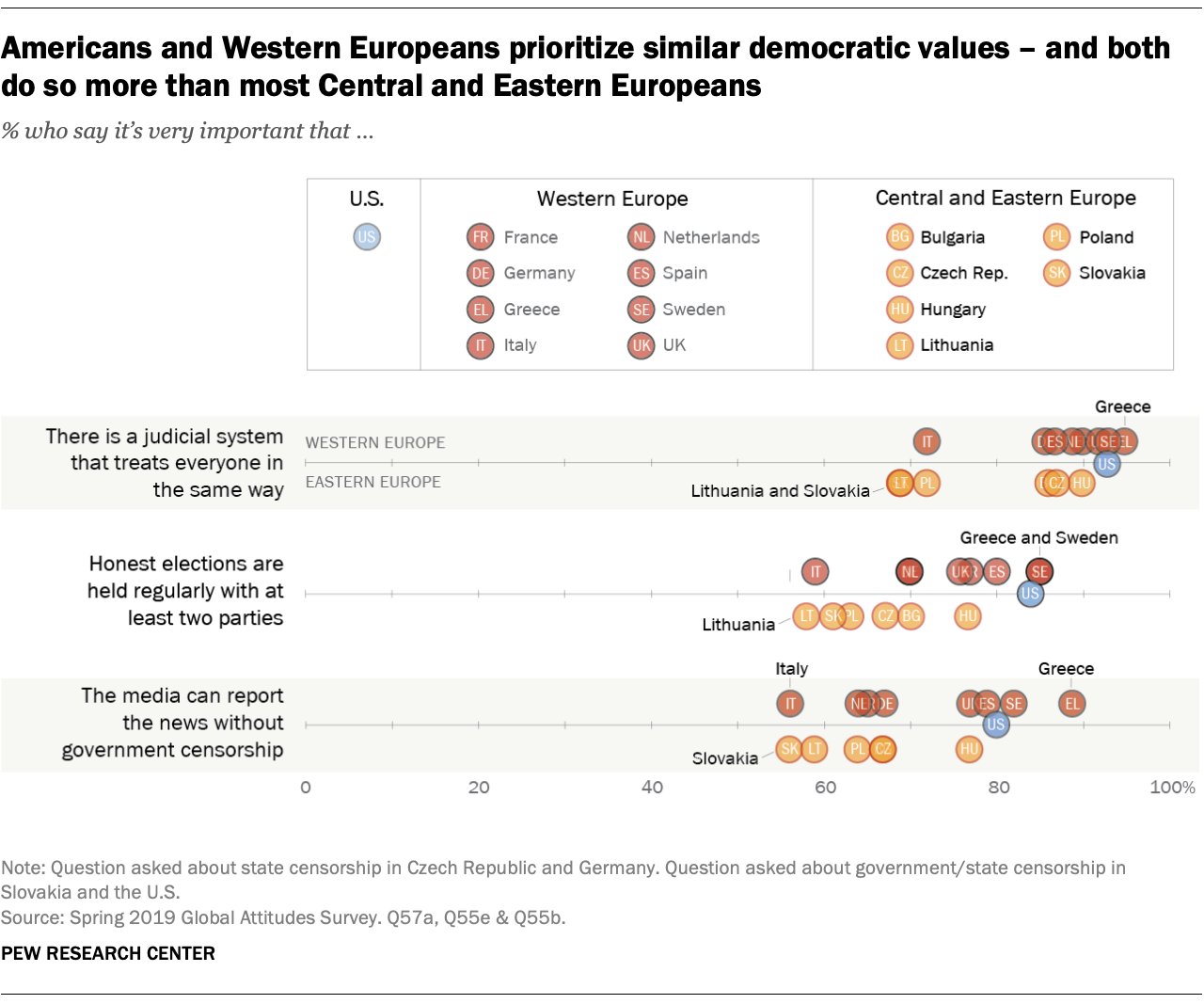 One issue where Americans stand out slightly from their Western European counterparts is the importance they place on censorship-free media. Eight-in-ten Americans think it’s very important that the media be able to report freely without government intervention, while a median of 72% of Western Europeans say the same, ranging from a high of 89% in Greece to a low of 56% in Italy. Opinion also varies markedly across Central and Eastern Europe, from a high of 76% in Hungary to a low of 56% in Slovakia.

3Americans increasingly resemble Western Europeans in attitudes about LGBT rights and gender equality, and they generally are more progressive than Central and Eastern Europeans. Historically, Americans have been less likely to say homosexuality should be accepted by society than many Western European counterparts. Today, 72% of Americans say homosexuality should be accepted by society, compared with 21% who say it should not be accepted. While this is substantially lower than the median of 86% in Western Europe, it’s much higher than the median of 46% who say the same in Central and Eastern Europe. The distance between Americans and Western Europeans has also narrowed somewhat since the question was first posed in 2002. Then, 51% of Americans agreed – compared with roughly three-quarters or more of Italians (72%), Britons (74%), French (77%) and Germans (83%).

The same narrowing of the gap between Americans and Western Europeans emerges when it comes to issues of egalitarian marriages. Americans’ preference for marriages where both the husband and wife have jobs and together take care of the house and family has increased 10 percentage points since 2002, while opinion in Western Europe has remained largely stable over that same period. Today, 68% of Americans say this is the more satisfying way of life, compared with 21% who prefer one where only the husband provides for the family and the wife takes care of the home. Still, all Western European publics are more likely than Americans to say they prefer both partners to work and share responsibilities at home (median of 79%), while American opinion more closely resembles views across Central and Eastern Europe (median of 68%).

4Americans see religion as more important than most Europeans – whether in their daily lives or in terms of the ability to practice freely. Around half of Americans (47%) say religion is very important in their daily lives, which is significantly higher than the median of 22% of Western Europeans or 19% of Central and Eastern Europeans who say the same. Outside of Greece (50%), no public comes close to Americans in terms of the importance they place on religion in their daily lives; rather, a quarter or fewer in every other EU member state surveyed say religion is very important to them. Americans stand out once again when it comes to how important people say it is to be able to practice religion freely in their country. Nearly nine-in-ten Americans (86%) see free religious expression as very important for the country, which is much higher than almost any European public surveyed, though around three-quarters or more Greeks (83%), Britons (75%) and Germans (72%) do say the same.

5Americans are more likely than most Europeans to see individual success as something within their control. In every EU member state surveyed, roughly four-in-ten or more say that success in life is pretty much determined by forces outside their control. A median of 53% in Western Europe and 58% in Central and Eastern Europe say this, but only 31% of Americans agree.