This week, the National Association of Black Journalists (NABJ) holds its annual meeting in Miami. The meeting comes amid increased attention to the role of black journalists in the United States and recent changes to black-oriented news media organizations, such as a decision by the Chicago Defender, a black newspaper founded in 1905, to cease printing (though it will remain available online).

Pew Research Center has studied black Americans’ attitudes toward the news media – as well as their news consumption habits – for years. We have also examined minority representation within U.S. newsrooms. To coincide with the NABJ conference, here are seven key facts about black Americans and the news media: 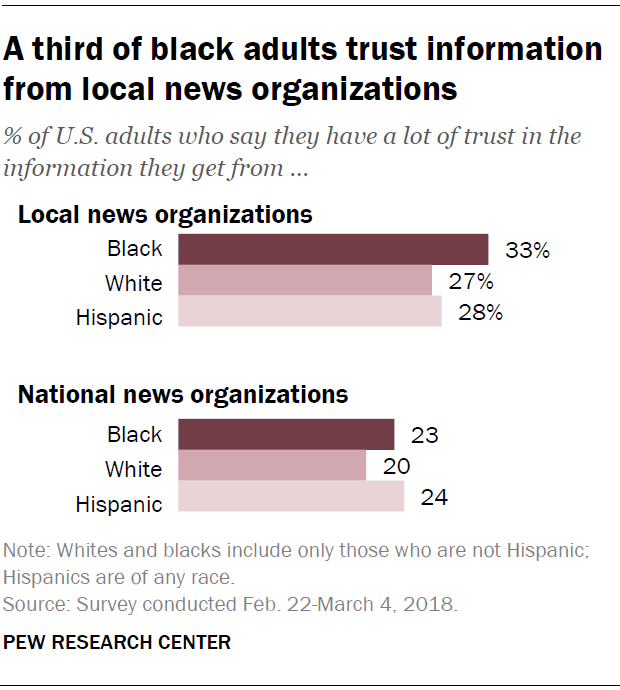 A large majority of black adults (80%) expect that national news stories will be accurate, more than the share of whites (70%) or Hispanics (71%) who say the same. Overall, 71% of U.S. adults have this expectation.

2Black adults are more likely to feel connected to their main source of news. About half of blacks (53%) feel connected to their main news source overall, compared with four-in-ten whites and 46% of Hispanics. Hispanic and black Americans are also more likely to say news organizations understand people like them: 43% of blacks and half of Hispanics say so, compared with 36% of whites. Party could play a role here: Black and Hispanic Americans are more likely than whites to identify as Democrats, and Democrats generally give the news media more positive ratings than Republicans. 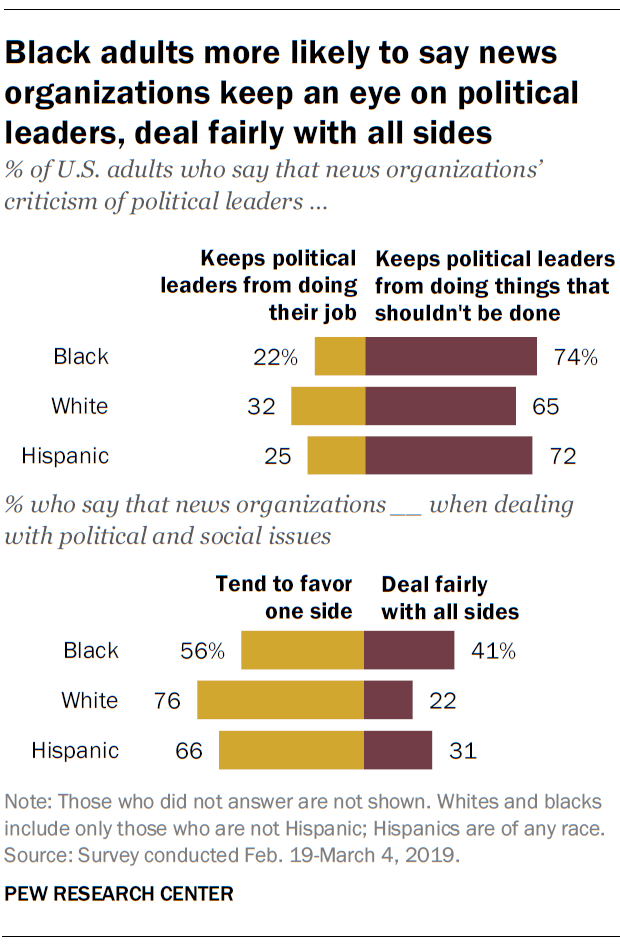 The news media’s watchdog role is seen as more of a necessary check among black adults than among whites. About three-quarters of blacks (74%) say that news organizations’ criticism of political leaders – known as the media’s “watchdog” role – keeps these leaders from doing things that shouldn’t be done. A similar portion of Hispanics (72%) say the same, but that share drops to 65% among whites.

4Black Americans are less concerned about made-up news than other national issues. When asked what they think about “made-up news and information,” about four-in-ten black adults (42%) say it is a very big problem, compared with about half of whites (51%). They also rank it much lower among a list of potential challenges. Among whites, made-up news draws more concern than seven of the 11 issues asked about. But among blacks, most of these issues are seen as more important than made-up news. Hispanics also rate most other problems as more important than made-up news. 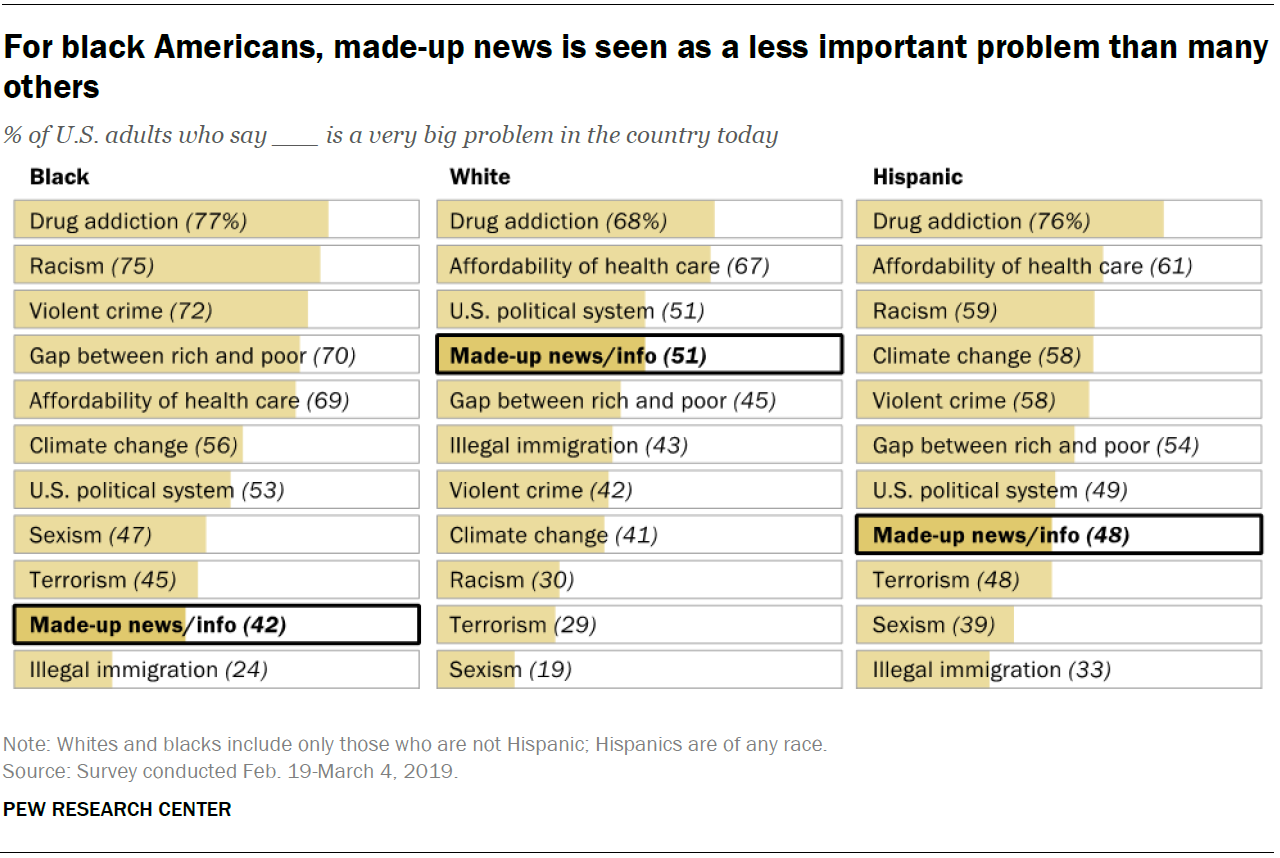 This gap extends to how Americans perceive made-up news that is intended to mislead the public: Whites are more likely than blacks to say that a lot of made-up news is created about politics (80% vs. 55%) and that made-up news causes a great deal of confusion (72% vs. 54%). 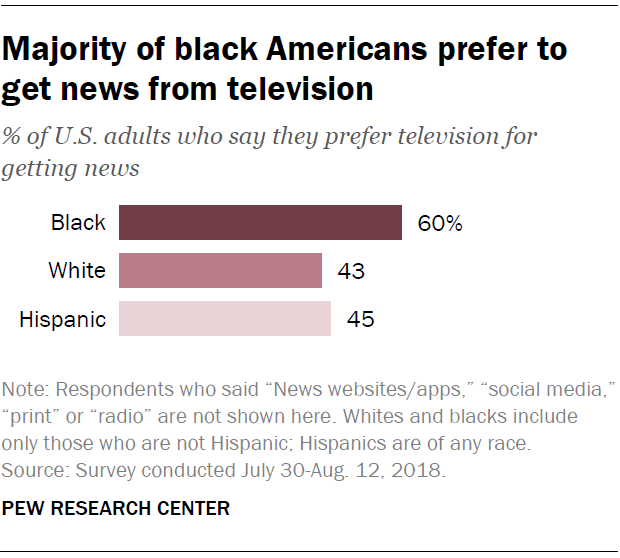 Black Americans prefer getting their news from TV. Six-in-ten say this is their preferred pathway to news; far fewer prefer online (25%), radio (9%) or print (5%). Among Hispanic and white Americans, fewer than half prefer television (though it is still the most common choice).

6Black newspapers are small, community-oriented publications. There are over 100 black newspapers in the United States. Of those that report audited circulation, only one – The St. Louis American – has a circulation of over 50,000, and many have seen their circulation decline in recent years. This mirrors trends in the newspaper industry overall, where circulation reached its lowest recorded level in 2018. 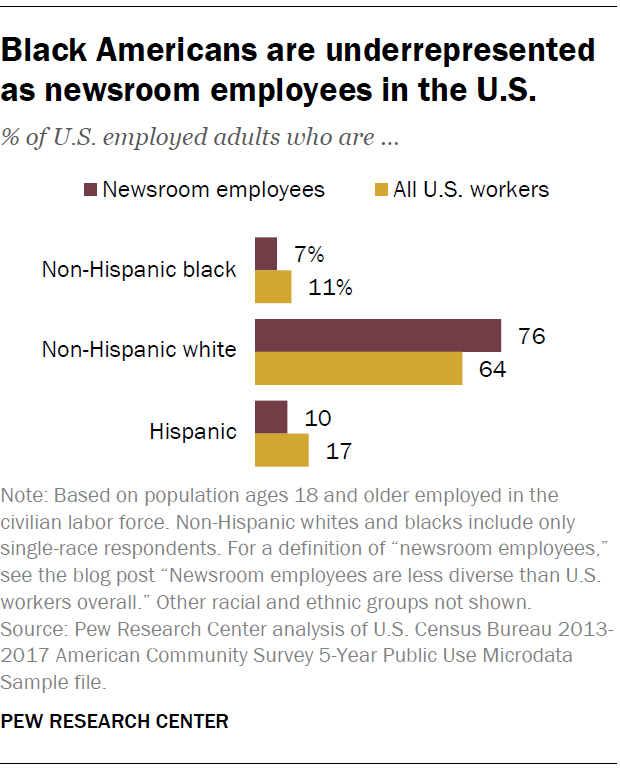 Black Americans tend to be underrepresented in U.S. newsrooms. While 7% of newsroom employees are black, 11% of U.S. workers overall are black, according to a Pew Research Center analysis of 2013-2017 American Community Survey data. There is slightly more proportional representation in local TV newsrooms, with the Radio Television Digital News Association finding in 2018 that 12% of those workers are African American. However, only 6% of news directors – who constitute the leadership of such newsrooms – are black, up from 2% in 1995.