Independence Day is a national celebration of freedom, fireworks, family, friends and frankfurters. It’s also, by one measure, the most dangerous day of the year.

On average, more than 45,000 people visit U.S. hospital emergency rooms for treatment of injuries on July 4 and 5 – nearly 91,000 in total, by far the highest daily numbers in the entire year. By comparison, the average daily number of injury-related ER visits over the summer months (June, July and August) is about 40,700. The holidays that bookend summer have somewhat higher averages – about 41,900 for the last week in May, covering Memorial Day weekend, and 42,200 for the first week of September, which typically includes Labor Day weekend – but even they are well below Independence Day.

The biggest reason for the Fourth of July spike in injury-related ER visits? No surprise: fireworks. On average, more than half of all the fireworks-related injuries Americans sustain each year occur during the first eight days of July – a total of nearly 4,900 last year.

These figures come from Pew Research Center’s analysis of 2000-2018 injury data from the U.S. Consumer Product Safety Commission’s National Electronic Injury Surveillance System, or NEISS. The system gathers data from a sample of about 100 of the nation’s 5,000 or so hospital emergency departments, then statistically weights the results to reflect the total number of ER visits in the U.S. each year. NEISS gathers data on, among other things, patients’ age, gender, race and ethnicity; the nature and disposition of the injury; and any products involved (reflecting the CPSC’s consumer-safety responsibilities).

Most of the injuries that occur around the Fourth are the same sorts of mishaps that predominate year-round: slipping on floors, falling out of bed or off a chair, tripping down stairs, pulling a muscle while exercising or playing sports, and the like. Fireworks-related injuries, though, are marked exceptions: Last year, fireworks ranked 196th overall in the list of products cited as contributors to injury-related ER visits, but 16th among injuries in the first eight days of July. The previous few years showed similar patterns.

The only other notable difference between the first eight days of July and the rest of 2018 was the prevalence of swimming-related accidents. Swimming was the fifth-leading factor associated with injury-related ER visits in the July 1-8 period, but was the 25th-most-frequently cited for all of 2018. Still, only about 10% of the year’s swimming-related injuries happened between July 1 and July 8. 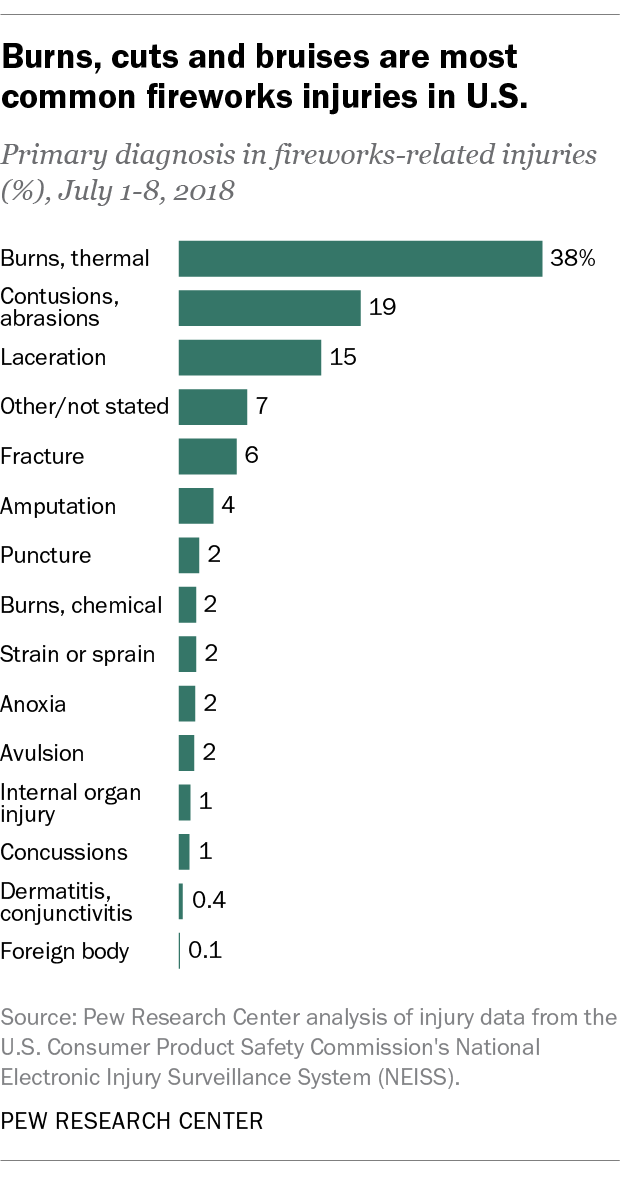 But another parental warning – “You could put your eye out!” – is borne out by the NEISS data. Eyeballs were the most commonly injured body part for July 1-8, 2018, accounting for one-in-six fireworks-related injuries (16.6%). The face (13.7%), hands (11.8%) and fingers (11.5%) were next most-frequently hurt; together, those four body parts accounted for more than half of all fireworks-related injuries in the first eight days of July 2018.

Although some of those injuries can be dire, most fireworks-related injures appear to be less serious. In 83% of the cases recorded last July 1-8, patients were either treated at the ER and released or examined and released without treatment. Fewer than 10% were admitted, while 6% were treated and transferred to another hospital.

In this analysis, we focused on injuries with treatment dates in the first eight days of July, a span during which the average daily number of fireworks-related ER visits was at least 150. We only considered injuries as fireworks-related if fireworks were the first product listed as associated with the injury.

#BlackLivesMatter surges on Twitter after George Floyd’s death
For U.S. teens today, summer means more schooling and less leisure time than in the past
10 facts about American workers
Europeans approved of EU’s handling of COVID-19 this summer – but much has changed since
The way U.S. teens spend their time is changing, but differences between boys and girls persist
10 key findings about Jewish Americans
Defining generations: Where Millennials end and Generation Z begins
Jewish Americans in 2020
Quiz: Are you a Core Conservative? A Solid Liberal? Or somewhere in between?
What We Know About Gen Z So Far