More than half of U.S. eligible voters cast a ballot in 2018, the highest turnout rate for a midterm election in recent history, according to a Pew Research Center analysis of newly released data from the U.S. Census Bureau. The increased turnout was particularly pronounced among Hispanics and Asians, making last year’s midterm voters the most racially and ethnically diverse ever.

With enthusiasm at a record high, more than 122 million people voted in the 2018 elections, the highest in a midterm election year since 1978. Last year also marked the first time since 1982 that the voter turnout rate in midterm elections surpassed 50%. This was a stark reversal from the previous midterm year, when turnout had decreased – from 45.5% in 2010 to 41.9% in 2014. (The voter turnout rate is the share who cast a ballot among eligible voters, defined as U.S. citizens ages 18 and older. Historical data in this analysis starts in 1978, the first year the Census Bureau gathered citizenship data for its survey of voters.)

Here are key takeaways on voter turnout by race and ethnicity during the 2018 elections:

For example, tabulations using this adjustment and reported by Michael McDonald of the University of Florida produce a Hispanic national voter turnout rate of 36.9% for 2018, 3.5 percentage points below the Census Bureau’s official estimate of 40.4%. For non-Hispanic whites, the adjusted voter turnout rate is 55.2% in 2018, 2.3 points lower than the Census Bureau estimate.

No matter the method used, voter turnout rates in 2018 were the highest for a midterm election measured using the November Voting and Registration Supplement. Under both measures, the voter turnout rate in the 2018 midterms for all the referenced racial and ethnic groups increased to historically high levels. 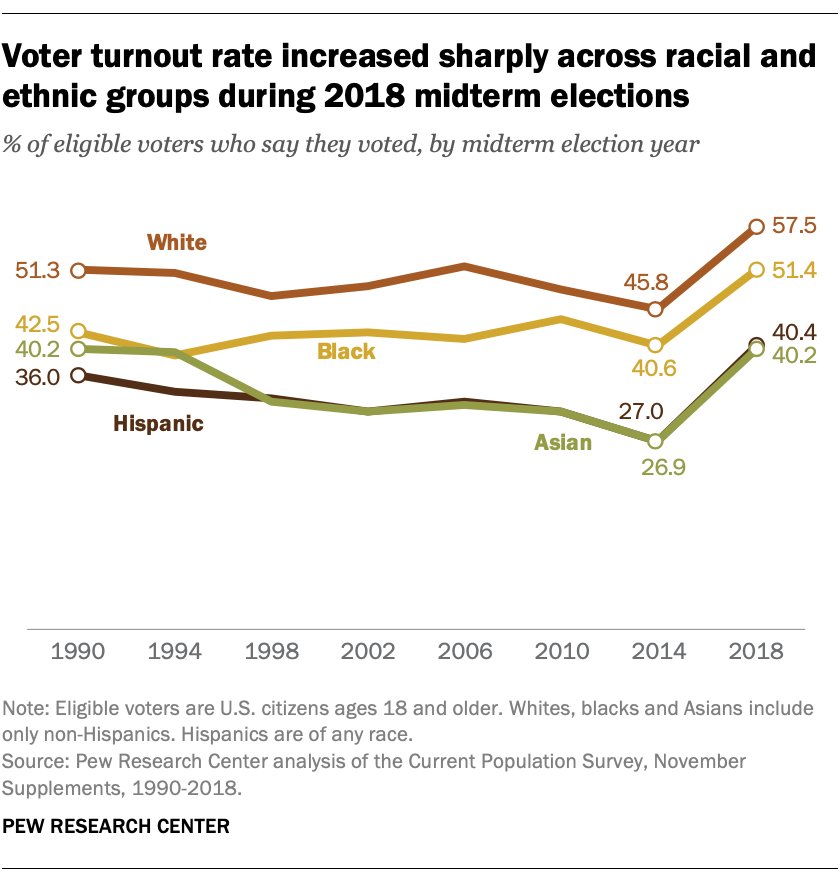 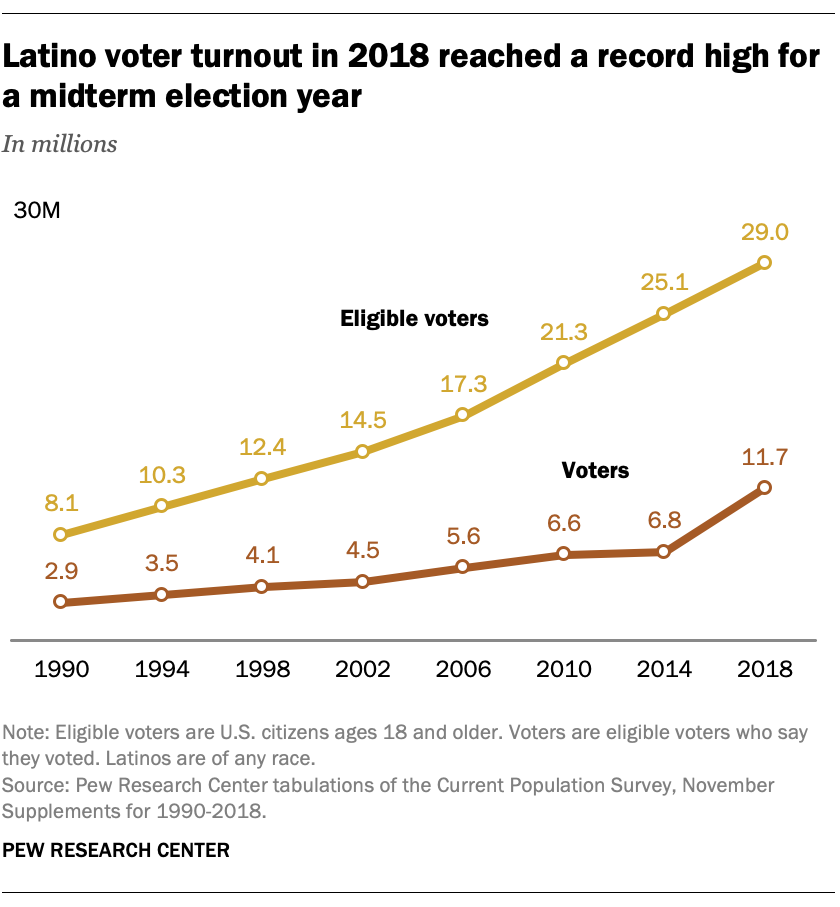 Hispanic turnout in 2018 was consistent with substantially greater interest in the election compared with four years earlier: Prior to the midterms, 52% of Hispanic registered voters said they were giving “quite a lot” of thought to the elections, up from just 35% in 2014. 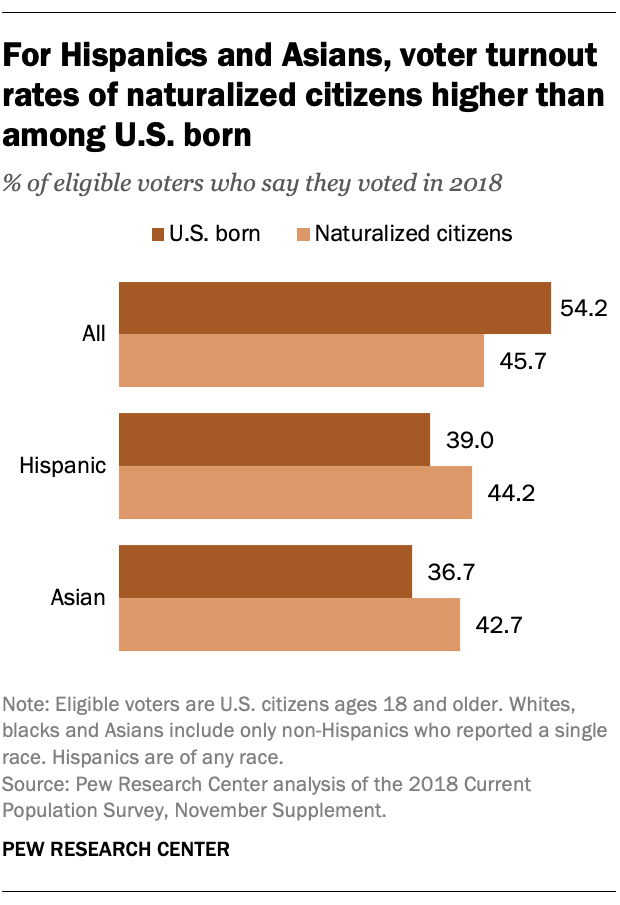 In a year when immigration was a top issue, the total number of naturalized-citizen voters nearly reached 10 million in 2018, up from 6.6 million in 2014. This nearly equaled the 10.8 million naturalized citizens who voted in the 2016 presidential elections. 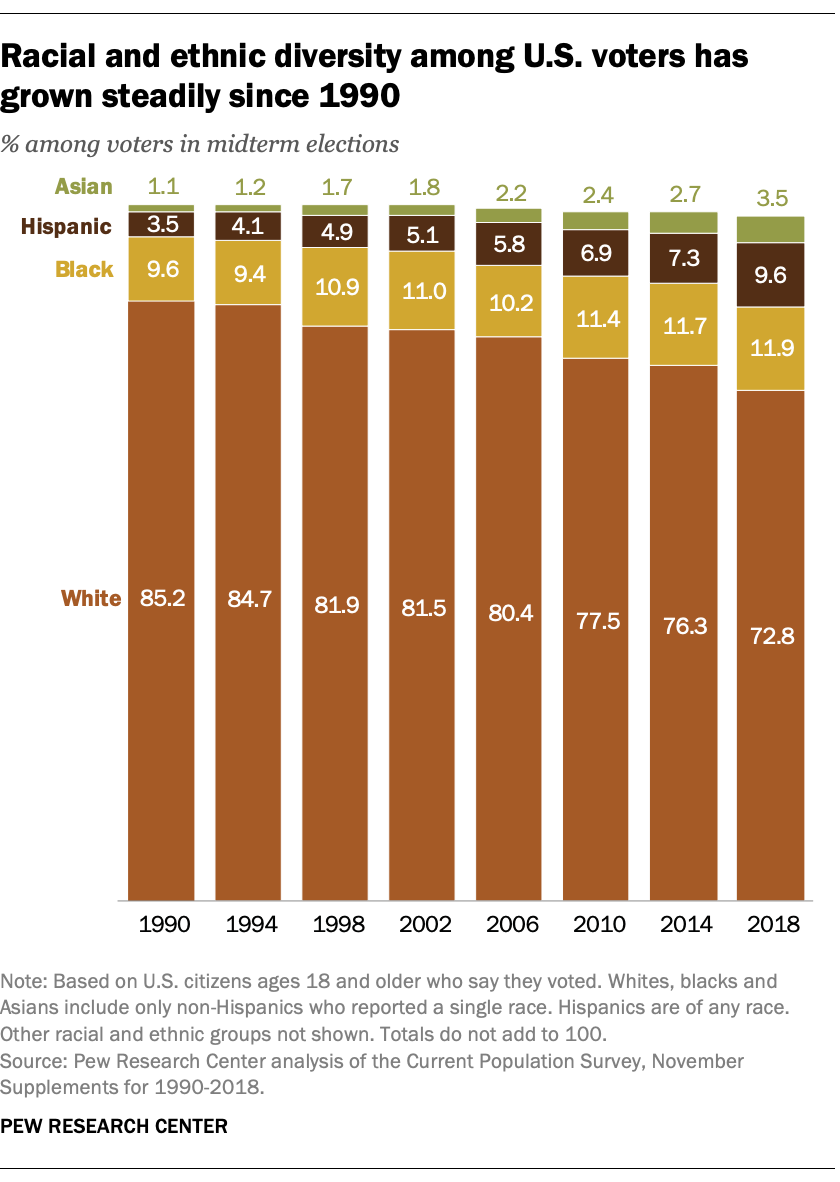 The nation’s voting population in 2018 was the most racially and ethnically diverse ever for a midterm election. Blacks, Hispanics and Asians accounted for a record 25.0% of voters, up from 21.7% in 2014. Whites continue to make up the vast majority of voters (72.8%) and their overall numbers continue to grow. However, as a share of U.S. voters, the 3.5 percentage point drop among white voters since 2014 is one of the largest declines between midterms in decades.

Correction: In a previous version of this post, researcher Aram Hur’s name was misspelled under “Challenges in estimating voter turnout rates with the Current Population Survey.”