Indonesia’s presidential and parliamentary elections this month come at a time when a majority of Indonesians are optimistic about the state of their country’s democracy and economy, according to a Pew Research Center survey conducted in summer 2018.

Indonesia is the world’s largest predominantly Muslim country and the third largest democracy. And while the survey found positive feelings about its political system among Indonesians, the 2019 election is being held against a backdrop of political and economic tension. In 2017, the capital city’s former governor was jailed for blasphemy, and the religiosity of President Joko Widodo (also known as Jokowi) has been questioned by his more conservative critics. The country’s relationship with China has also taken center stage this election cycle, as accusations of foreign hacking and disapproval of bilateral trade policies have surfaced. The survey found that views of China and the United States had worsened among Indonesians since the country’s last general election in 2014.

Here are five facts on public opinion leading up to the April 17 presidential election. 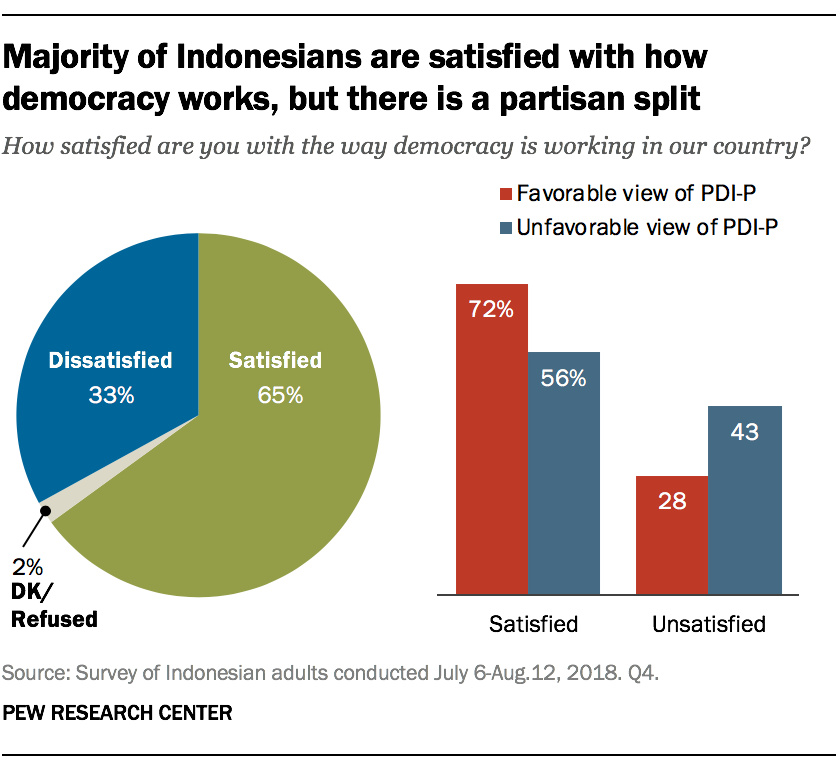 However, there is a partisan split in satisfaction with democracy. Among those who hold a favorable view of the incumbent’s party, the Indonesian Democratic Party of Struggle (PDI-P), 72% said they were satisfied with the way democracy is working in Indonesia, which is 16 percentage points higher than those who hold an unfavorable view of the PDI-P. 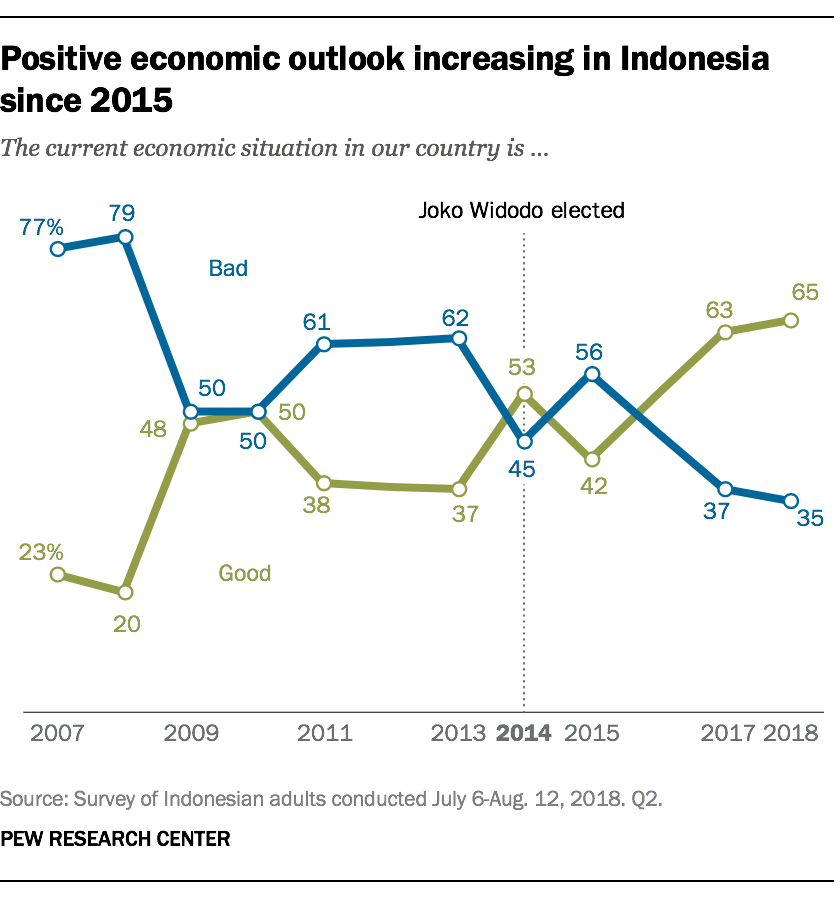 The share of Indonesians who say their current economic situation is good increased to almost two-thirds (65%) in 2018. This positive sentiment stands in contrast with the state of the country’s currency, the rupiah, in 2018 – whose value depreciated to near record-low levels, edging close to values seen during the 1997-98 Asian financial crisis.

This optimism about the economy is also present in respondents’ views of their children’s future: Three-in-four say that they will be financially better off than their parents, while only 17% say they will be worse off. 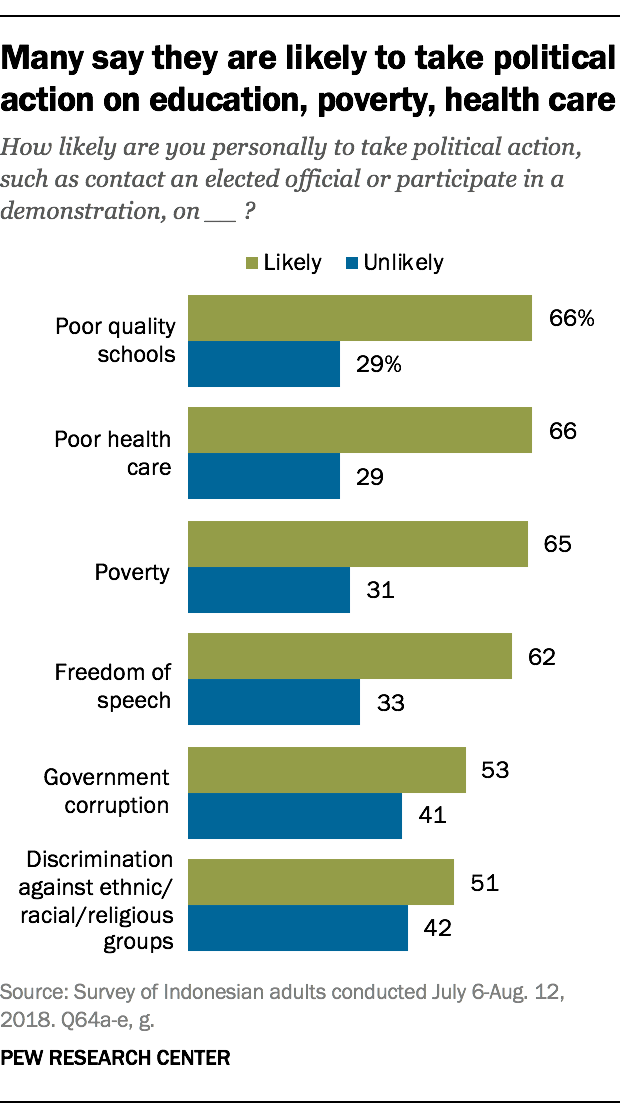 Six-in-ten or more Indonesians say they are likely to take political action on a range of issues, but most say they have never actually participated in civic activities. About two-thirds (66%) said they would take action such as contacting an election official or participating in demonstrations when it comes to poor quality schools or health care. Roughly as many (65%) said they would do so if the issue was poverty, and 62% said they would engage in political activity in support of freedom of speech.

While majorities said they were likely to get politically involved on some issues, large shares of Indonesians said they hadn’t done so in the past. Roughly seven-in-ten (71%) said they have not and would never participate in an organized protest or post their thoughts on political or social issues online. More than half (54%) also said they would never attend a political campaign event or speech. The exception to this is voting: In 2018, a large majority (91%) said they have voted in the past year or in the more distant past. A similar share (89%) said the same when the question was asked in 2014. 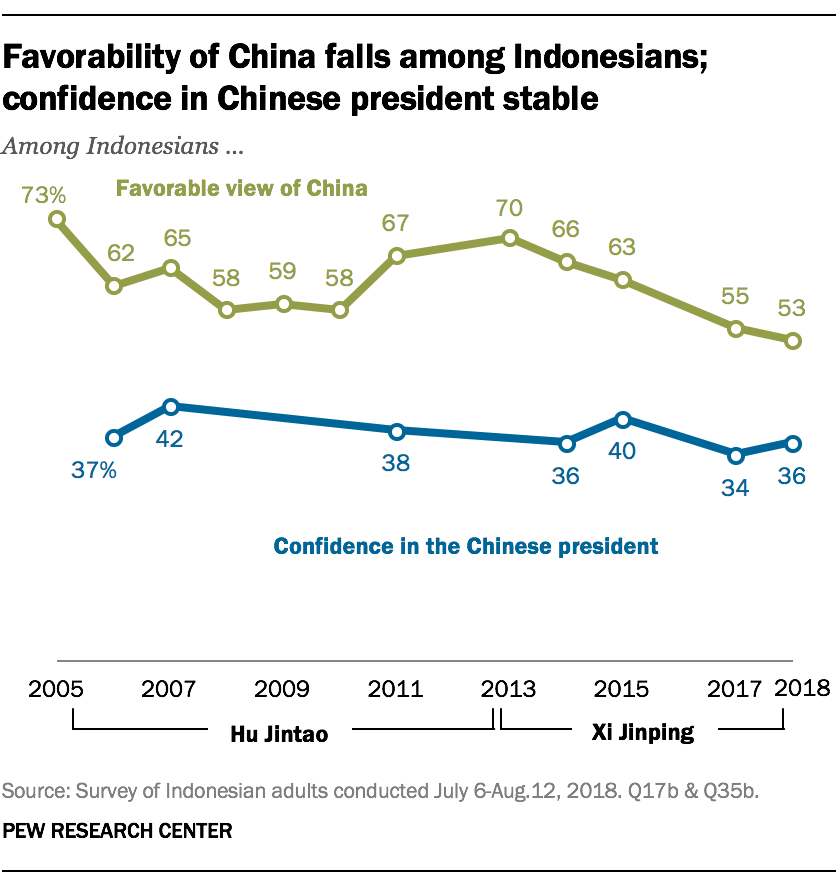 The share of Indonesians who hold favorable views of China has declined over time amid concerns over increasing economic dependence on Beijing. In 2018, 53% had a favorable view of China, down from 66% in 2014, the year of the last Indonesian election.

More than four-in-ten Indonesians said China’s power and influence is a major threat to their country in the 2018 survey, versus only 27% who said this in 2013. 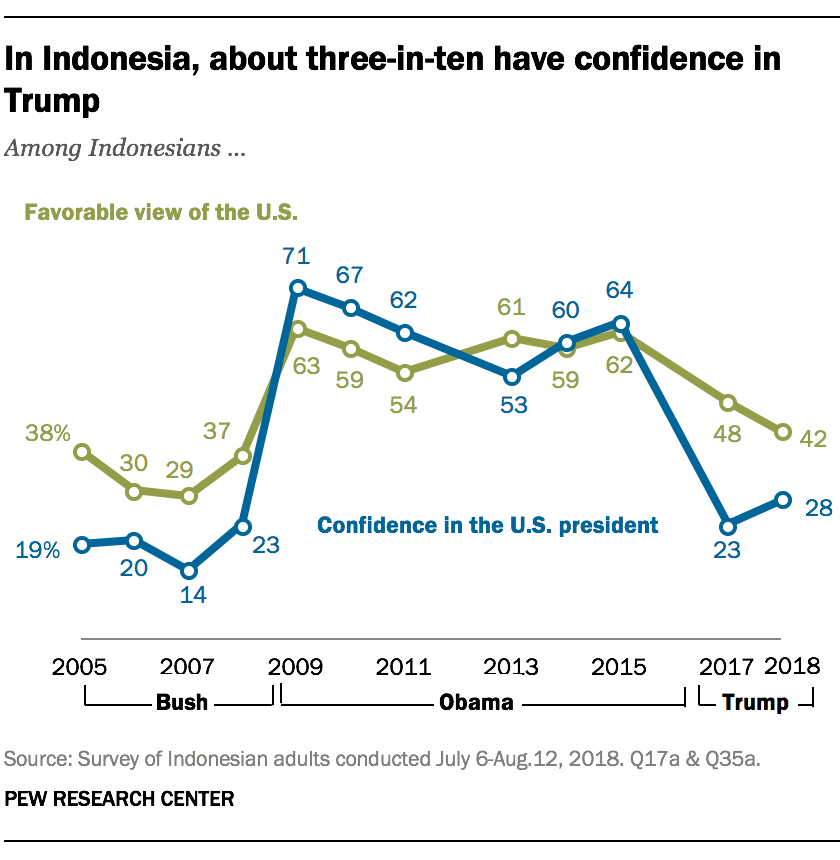 Roughly three-in-ten Indonesians (28%) in 2018 said they were confident in Donald Trump’s ability to do the right thing regarding world affairs, down from the 64% who had confidence in Obama in 2015. And 52% of Indonesians in 2018 saw U.S. power and influence a major threat.