Note: See this post for more recent opinion and demographic data on those brought to the U.S. illegally as children. 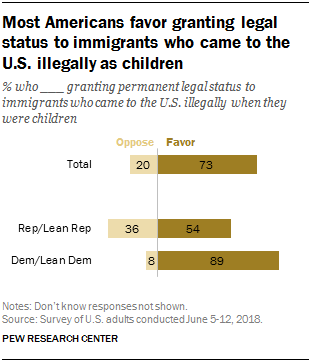 Most Americans favor granting permanent legal status to immigrants who came to the U.S. illegally as children. And a 56% majority opposes substantially expanding the wall along the U.S.-Mexico border.

Nearly three-quarters (73%) of Americans favor granting permanent legal status to immigrants brought to the U.S. illegally when they were children, while just 20% are opposed, according to a new national survey by Pew Research Center, conducted June 5-12 among 2,002 adults. Opinions on this issue – and views of expanding the U.S.-Mexico border wall – have changed little since January.

Democrats and Democratic-leaning independents overwhelmingly favor granting legal status to those who came to the U.S. illegally as children (89%), as do about half of Republicans and Republican leaners (54%); about a third of Republicans (36%) oppose this policy. (The findings in this survey do not relate to the current controversy over separating immigrants from their children at the border, but only to children who had already arrived in the U.S. with their families.) 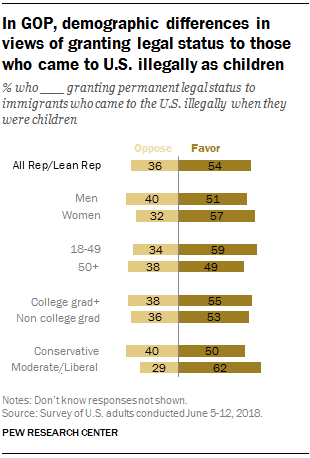 There is no major subgroup of Republicans in which a majority opposes granting legal status to immigrants brought to the U.S. illegally as children. Among Democrats, there is broad support for this policy across nearly all demographic and ideological groups.

Currently, 56% of Americans are opposed to expanding the wall along the U.S. border with Mexico, while 40% favor doing so. Opinions are little changed since January, when 60% opposed expanding the border wall and 37% were opposed.

There also are race, age and educational differences in these views. Whites are divided (48% favor, 48% oppose), while large majorities of Hispanics (73%) and blacks (71%) oppose expanding the wall along the U.S.-Mexico border.

As was the case in January, older adults and those who have not completed college are more likely than young people and those with four-year degrees to favor expanding the border wall.